Bill Lockwood: This is a Marxist Coup 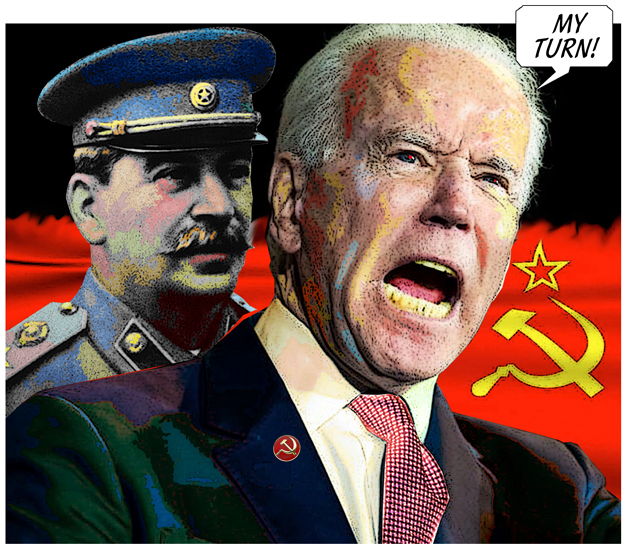 Karl Marx insisted that “The philosophers have only interpreted the world in various ways; the point, however, is to change it” (Theses on Feuerbach, XI). Chuck Schumer of the Socialist/Democrat Party regurgitated Marx’s mantra: “We are going to change America.” This is what Barack Obama had in mind when he called for the “fundamental transformation of America.” He was not schooled in Marxist philosophy for nothing.

President Donald J. Trump is the most pro-American, pro-family, pro-Christian, pro-USA and anti-United Nations World Socialist Government president that we have ever seen – or will ever see–in our lifetime. This is why the world socialist leaders controlling the United Nations have been banging the war drums for the removal of Donald Trump.

Consider Jeffrey D. Sachs. He is professor for “Sustainable Development”; professor of “Health Policy and Management” at Columbia University; Director of Columbia’s Center for Sustainable Development and the UN Sustainable Solutions Network. His works are extensive in which he calls for the complete end of the free-market system. He has served as Special Advisor to three UN Secretaries-General.

Sustainable Development is a top-down controlled economy by which the United Nations will ration goods, services and resources around the globe—in the name of “fairness.” Sachs has continually spoken of the necessity of removing Donald J. Trump from office. It is a World Crisis to the Marxist-Globalists if America cannot rejoin such things as the Paris Climate Accord and pay billions of dollars to foreign nations for Climate Sins. America must help the world become “sustainable.”

Marxism has you in its crosshairs. The common-sense American who supports Making America Great Again. But first, the angry party of the Democrats must get Donald J. Trump. This does not simply mean defeating him in the election. According to Business Insider,

Lawmakers armed with subpoena power could also turn up information that federal prosecutors might not know about as the Justice Department under Joe Biden weighs whether to pursue a criminal case against Trump, who as a former president will no longer have immunity from such matters.

Columnist Luis Miguel notes, these are the same hypocritical Democrats who kept our government continually in turmoil with bogus investigations into Donald J. Trump while he was in office and who chirped that it was “inappropriate” for a President to investigate a political rival—remember Hunter Biden and the Ukraine phone call?

Former Obama spokesman Hari Sevugan highlighted the start of a “Trump Accountability Project” intended to “make sure anyone who took a paycheck to help Trump undermine America is held responsible for what they did.” You can read the article by Daniella Byck at Washingtonian.com.

Sevugan served as national press secretary for the Democratic National Committee and worked as deputy campaign manager for former presidential candidate Pete Buttigieg. He tweeted last Friday that White House staff had begun looking for jobs and added that “Employers considering hiring them should know there are consequences for hiring anyone who helped Trump attack American values. Find out how at the Trump Accountability Project.”

Their website headlines, “We must never forget those who furthered the Trump agenda … those who took a paycheck from the Trump Administration should not profit from their efforts to tear our democracy apart.” If you wish for peace in America, you must REPENT, according to the Trump Accountability Project.” “Coming together starts with acknowledging the truth: These individuals (Trump supporters, Trump administration officials, bl) have shattered laws and norms that hurt our democracy …”

At the bottom of the page is this headline: “We should not allow the following groups of people to profit from their experience: Those who elected him; Those who staffed his government; Those who funded him.”

Are honest-minded Americans going to idly sit by and allow this to continue? Once they have Trump, they are coming after you. Marxists are throwing down the gauntlet of war here and promising what they intend to do.

You in the Crosshairs

The anger and vitriol from the left knows no bounds. You are the target. The left has been “heathens raging” (Psalm 2:1) ever since the American voter threw into reverse to the Marxist/Socialist final takeover of America by Barack Obama by the election of Donald J. Trump. Now with Joe Biden set to take the presidency, they are back on track—but not without unabashed furor against American patriots for getting in their way.

Jake Tapper promises blacklists against principled patriots. “At a certain point one has to think to only about what’s best for the nation (peaceful transfer of power) but how any future employers might see your character defined during adversity.” Alexandria Ocasio Cortez, not to be outdone, calls for “lists of Trump supporters.” These have had “complicity in the future.” Here the communist barmaid turned power-broker in Congress shows the hand of the left. Trump supporters have destroyed their future socialist plans. Only for a short time, however—but still–complicity.

Neocon columnist of the Washington Post, Jennifer Rubin, spells it out. Those who supported Trump should never be allowed to hold public office, serve on corporate boards, or participate in other avenues of society. One Antifa leader is launching a new website with addresses and locations of Trump supporters. Lawenforementtoday.com posts this “URGENT” message. “Website lists Trump supporters and their home addresses just days before the election” is the warning issued by author Chris Elliot. The website is designed to “stalk and harass Trump supporters.”

Then there is the former Obama staffer, Michael Simon who tweeted that he wants “retribution” against anyone who worked for the Trump administration. Add to that actress Jonelle Monae who stated in cursing language that she wants all Trump supporters “to burn.”

The founder of George Soros’ funded Transition Integrity Project, Nils Gilman, actually called for the execution of former Trump national security advisor, Michael Anton. He called him the “Robert Brasillach of our times” who “deserves the same fate.” Brasillach was a French author and journalist executed for “intellectual crimes” against the state.

Too many conservatives shrug this all off by thinking, “they can’t do all that.” Tell that to Gen. Michael Flynn. Tell that to Trump confidant Roger Stone. Tell that to national reporters such as James Rosen whom Barack Obama harassed. No, you just keep your head down, cower in the bunkers of local issues and all will be well. Allow these Marxists to finish their coup for America and keep your mouth shut. That’s the message that is being played.