John Kachelman, Jr.: As the election approaches it is time to  “Praise the Lord AND Pass the Ammunition!” 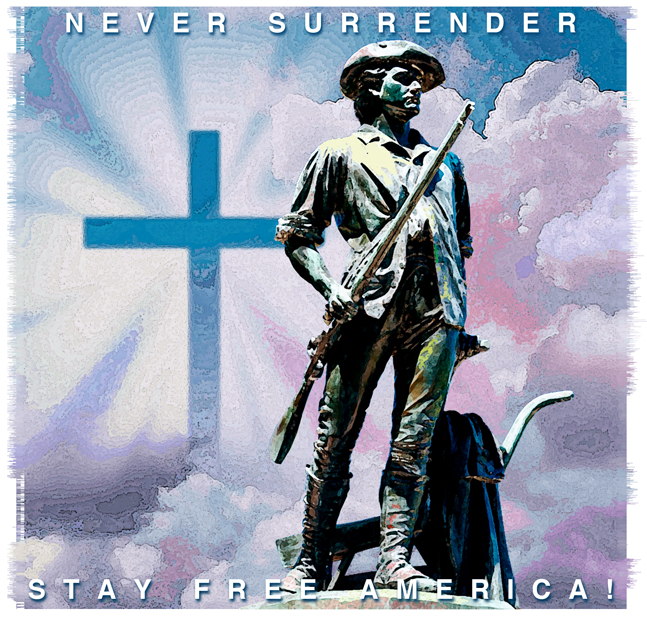 The United States of America currently faces a desperate situation requiring “desperate measures.” Our nation needs its citizens to rise up and courageously confront the evil threatening our freedom. It is NOT time to sit back and blithely say “well the Lord is in control and there is nothing I can do.” Such a comment is blatantly wrong. Such confesses one’s blindness to what ought to be done. Such is not just wrong but wrong multiplied—it is foolishness “gone to seed”! One making this statement is surrendering to evil; conceding the very faith that he supposedly is advocating! This is unashamed complicity in surrendering God’s values to the Devil. This retreat using vague words is actually a treasonous act in the midst of battle. Read your Bible and show me a single instance where God was pleased when His people struck their colors and surrendered to the enemy? NEVER once does God approve of a complacent embrace of evil excusing it as “God is in control.”

This point is illustrated by Jeremiah’s lament spoken to those leaving Jerusalem in smoldering ruin, “Is it nothing to all you who pass this way?” (Read Lamentations 1 for the complete account). Ancient Jerusalem had settled into a comfortable convenience saying “This is the city of God and He will protect it so we will not fret about what is happening.” Their comfortable convenience turned into a horrid historical fact. Their unwillingness to engage and confront brought a horrible torture, death and destruction to their family! Their refusal to engage caused them to sacrifice their children. This illustrates what happens when people sit back in resignation and neither says nor do anything while their nation disintegrates before their very eyes!

Now consider the song “Praise the Lord and pass the ammunition.” Remember the undeniable truth that “desperate times call for desperate measures.”

The Japanese surprise attack on Pearl Harbor in 1941 is known as the single greatest loss of American lives (it is now joined with the Muslim terrorist attacks known as 9/11). On the morning of the attack the US Pacific Fleet was wounded (the attack damaged the fleet but within months most of the damaged ships had been repaired and deemed sea worthy).

During the attack an Army chaplain was among the defenders returning small-arms and machine gun fire on the oncoming fighters. In the heat of the battle, he was asked by the men to say a prayer for them, as they were afraid that those were the last moments of their lives. It is said that the chaplain lay down his Bible, manned one of the machine guns and shouted: “Praise the Lord and Pass the Ammunition.” This gesture boosted the morale of the soldiers and they continued the defense of the harbor.

The legend behind this song says the song was dedicated to the fighting chaplain, by Frank Loesser in 1942.

The true story is a bit different from the legend. According to the facts of the event a chaplain named Lieutenant Howell Forgy was involved. Forgy was aboard the USS New Orleans at the time of the attack. The story was reconstructed from several sources, one of them being Forgy himself. The officer in charge of the ammunition line on the USS New Orleans reported that he originally heard the phrase during the attack.

When he heard it, he turned around and saw Chaplain Forgy walking towards him through the line of scared man, patting them on the back and saying the famous sentence: “Praise the Lord and pass the ammunition.” The officer reported that it had a positive effect on the man and on him also, because he felt comforted and prepared.

The story became the basis of a patriotic inspirational song for American soldiers on the battlefields, but also for the people on the home front.

After the recording of the song, another lieutenant who served in Howell Forgy’s outfit made a remark how they used to kid him about the event, encouraging him to claim the phrase and stop the counterfeit of the story. According to the same officer, the chaplain was a modest man and he believed the story should remain uncredited to him or any other particular person, for that matter, since this way as a legend it could inspire the soldiers more.

Jack McDowell noted that the press became more interested in the story and eventually got the permission to interview the crew members of the USS New Orleans to learn the identity of the man. Chaplain Forgy’s superior officers set up a meeting with members of the press and at last, the real story of the song and the man who had inspired it was confirmed. Later, after the war, Forgy made an appearance on the popular game show “I’ve got a secret,” where he recalled and told the entire event:

“Well, I was stationed aboard the USS New Orleans, and we were tied up at 1010 dock in Pearl Harbor when the attacked began. We were having a turbine lifted, and all of our electrical power wasn’t on, and so when we went to lift the ammunition by the hoist, we had to form lines of men — a bucket brigade — and we began to carry the ammunition up through the quarterdeck into the gurneys, and I stood there and directed some of the boys down the port side and some down the starboard side, and as they were getting a little tired, I just happened to say, “Praise the Lord and pass the ammunition.” That’s all there was to it.”

The song was often played and released by multiple covers. It reached the number 1 position on the Billboard Chart in 1942.

The message and historical background of this song should alarm those today who are silent and complacent in the face of the evil facing our nation. Many have friends, family and associates who either uphold the evil political platform for the coming election or who silently “like” the atrocious immorality that is advocated by continuing to fund the recognized censorship of social media platforms! People do not understand that their “hiding” and “dislike—thumbs down” supports the platform that is dedicated to destroying the “Republic for which it stands”! A malevolent deception and many are willing cohorts of Satan in this platform. They love the platform more than they love God!

If you want a stinging rebuttal to this attitude of complacent surrender excusing one’s inactivity, then turn to (Judges 5:23). There God’s nation was in a desperate condition and urgently needed desperate action by God’s People. However, one village sat inactive. They excused their involvement. In military terms they did not “engage” in enemy. What is God’s opinion of such action? “‘Curse Meroz,’ said the angel of the Lord, ‘Utterly curse its inhabitants; Because they did not come to the help of the Lord, To the help of the Lord against the warriors.’”

Modern America is facing a desperate situation. The nation is divided by those pursuing an anti-God Marxist agenda and urging citizens to embrace the most heinous immorality. The troubling reality is that our nation’s soul is in peril. Let us trust in God BUT do not let us excuse our silent rejoinders to those advocating support and acceptance of the Democratic platform. Those who choose to be silent and sit inactively while professing an inexcusable “faith in God” to deliver, will historically join the defeated Jerusalem citizens who would not answer the Prophet’s query, “Is it nothing to all you who pass this way?”

Consider another historical anecdote from Ancient Judah. The background is King Asa’s reign. Zerah the Ethiopian came out against them with an army of one million men and 300 chariots. King Asa had an army of 300,000 from Judah 280,000 from Benjamin. The recon reports were demoralizing. The superior strength of the enemy exaggerated the obvious weakness of King Asa.

What did Asa do? Did he sit back, cowering in a corner wringing his hands whimpering, “What can I do? Look at all that is happening. Well…God in control and I cannot do anything.” Did he allow the voices of defeat and compromise to paralyze his response?

History records that Asa mobilized his army, engaged the enemy and defeated the Ethiopians with an amazing victory. “Asa went out to meet him, and they drew up in battle formation in the valley of Zephathah at Mareshah.” But in addition to his active response in engaging the enemy, history says, “Then Asa called to the Lord his God and said, ‘Lord, there is no one besides You to help in the battle between the powerful and those who have no strength; so help us, O Lord our God, for we trust in You, and in Your name have come against this multitude. O Lord, You are our God; let not man prevail against You.’  So the Lord routed the Ethiopians before Asa and before Judah, and the Ethiopians fled.”

In terms of Pearl Harbor 1942, Asa praised the Lord and passed the ammunition!

Where are YOU in this battle for America’s soul? Are you too embarrassed to make your commitment to God and His principles known to others? Do you justify your cowardice to engage saying “It will not matter what I say.” Are you a closeted believer whose faith is intimidated to silence so you allow family, friends and associates spew vile support for ungodly political platforms? Are you sitting back, cowering in a corner wringing your hands whimpering, “What can I do? Look at all that is happening. Well…God is in control and I cannot do anything.” Are you allowing the voices of defeat and compromise to paralyze your response to ungodly posts and comments?

On the battlefield there is absolutely NO tolerance for the cowering soldier. Such action jeopardizes the safety of the unit and allows for compromise of values and offers encouragement to the enemy. In the spiritual war, God will not allow such betrayal to go unpunished. “Be on your guard so that you are not carried away by the error of unprincipled men and fall from your own steadfastness” (2 Peter 3:17).

The Proverb writer urges man to practice behaviors that are “stately; becoming; admirable.” One of these is found in 30:30 where man is urged to emulate the Lion “which is mighty among beasts and does not retreat before any.”

It is past time to speak up and stand out as God’s soldier! It is time to engage and confront those who have casually accepted the evil’s that are embraced in the current election by the Democratic Party and its ancillaries BLM/ANTIFA.