Bill Lockwood: Red Star of Communism Over the Democratic Party 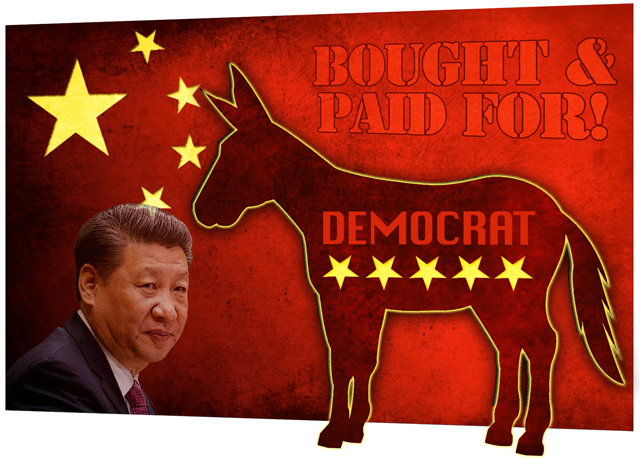 America’s globalist foreign policy-makers have for decades treasonously assisted the rise of godless and murderous communist regimes. Red China’s murderous slave-state has especially received the “most-favored nation” status while friendly nations such as Taiwan received the heel of our boot. This has been the ongoing legacy of America’ foreign policy – until Donald Trump. Trump is the first president with enough backbone to reverse course on these godless suicidal tendencies by our lawmakers. For it, he has received the ire of soft-shell Republicans and the acidic hatred of the Democratic machine as well as the press.

The guilt of aiding and abetting Red China’s gulag lies at the feet of both Democratic as well as Republican administrations. From the period of FDR through the no-win wars of Harry Truman, LBJ and Richard Nixon, into the political machinery of the Clinton and Obama eras, America has encouraged the rise of communism around the globe. It is no less with presidential hopeful Joe Biden.

The core of communism is systematic militant atheism and godless materialism. The latter is a fruit of the former. Vladimir Lenin did not express his own personal view of Christianity when he commented that it was the “opium of the people,” but was giving expression to the nature of the communistic beast itself.

And, Karl Marx, the father of the communistic system, which is responsible for the murders of more human beings than any dictatorship in history, stated, “The philosophers have only interpreted the world in various ways; the point, however, is to change it.” Indeed, changing the world has been Marx’s followers mission. Red China alone has amassed a body count of between 34 million to 64 million by 1971.

In 2014 the Global Times published an opinion piece by Zhou Weiqun, director of the Subcommittee of Ethnic and Religious Affairs at the Chinese People’s Political Consultative Conference. In it he emphasized that communism continues to demand that “CCP (Chinese Communist Party) members must not have any religious beliefs and have firmly to uphold Marxism and “materialism.’ One might think that the bloody history of communism and its hatred of God might turn Americans away from that philosophy. Not so. Aiding and abetting murderous regimes is particularly pronounced in the Democratic Party.

Democratic cooperation with Chinese Communism has a long history. When mainland China fell to Mao Tse-tung’s Communist forces in 1949 and Chiang Kai-Shek’s Nationalist Army was forced to escape to Formosa (Taiwan), the culprit was the notorious Franklin D. Roosevelt who promised Joseph Stalin at the Yalta Conference in 1945 the northern Chinese province of Manchuria in exchange for Soviet entrance into the war against Japan.

The Soviet army was supplied with FDR’s lend-lease equipment and was sitting along the Manchurian border. After the atomic bomb had been dropped on Hiroshima, the Red Army of the Soviets invaded Manchuria and captured Japanese arms which they immediately made available to the Chinese Communists. The balance of power shifted in China to Mao-Tse-tung’s army.

It was not merely Joseph McCarthy who stated that U.S. policy-makers lost China, John F. Kennedy did as well. He told the House in January 1949, “The responsibility for the failure of our foreign policy in the Far East rests squarely with the White House and the Department of State.”

After that planned catastrophe, the United States entered two no-win wars; Korea and Vietnam. Curtailed by the globalist President Harry Truman, Douglas MacArthur was forbidden victory. He was denied the right to pursue enemy planes that attacked our own; the right to bomb hydro-electric plants along the Yalu River as well as every plant in North Korea; the right to bomb the extremely important supply center at Racin in northeast Korea. Racin was a staging center utilized by the Soviet Union as they forwarded supplies for the North Korean Army.

America’s foreign policy looks as if it is built on assisting communism around the globe. Indeed, this is what occurred.
Jimmy Carter terminated diplomatic relations with our friends in Taiwan in December of 1978 and established diplomatic relations with the People’s Republic of China on the first day of 1979. Carter betrayed America’s friend, the Shah of Iran, and helped give Iran to the mullahs. And America continues to pay the price for that sabotage.

And how about the treasonous actions of President Bill Clinton pertaining to the People’s Republic of China (PRC)? Clinton’s Chinagate scandal involved:

• The appointment of Johnny Huang, a suspected Red Chinese agent to high positions in the United States government whereby secrets might easily be stolen

• The reception from Yah Lin “Charlier” Trie, a member of the Red Chinese-linked Triad crime syndicate, of $460,000 into the Clinton-Gore campaign

Obama was no different.

• The United States saw Chinese troops on U.S. soil for the first time during the Obama years

• Secretary of State John Kerry promised “more cooperation” with China in spite of the fact that known Chinese espionage had accelerated to a larger degree than ever before. It had reached “unprecedented proportions”

• The Chinese regime’s massive intelligence-gathering apparatus aimed at the United States did not concern Obama. American money continued to flow to China and global “climate change” deals were ratcheted up to siphon off more money to China

Where is Joe Biden in this equation? Democratic presidential hopeful Joe Biden is cut out of the same treasonous mold. Having served with President Barack Obama, who never met a communist he did not like, Biden has an impressive resume for favoring the Chinese communists.

• Biden considers China a “developing nation” and has made certain that China has access to Wall Street. For example, “In 2013, the Obama administration allowed Chinese companies to invest in U.S. capital markets without having their books inspected by U.S. regulators” (Epoch Times, quoting Brian Kennedy, chairman of the “committee on the Present Danger: China.” 9/9-15/20).

• Biden continues to desire Chinese “investment” in the United States. So he said at a roundtable meeting in Beijing in 2011.

• Michael Johns, former speech White House speech writer for George H.W. Bush and a Heritage Foundation foreign policy analyst, told The Epoch Times that Joe Biden, throughout his 47-year career in Washington, been supporting … “one of the biggest foreign policy lies ever told: that china’s economic ascent would lead to more moderation and liberalization in its approach with the U.S. and the free world, and in its human rights conditions at home.”

Many Democrats do not wish to be associated with “communism.” However, their own party not only favors socialism in all areas, but openly assists godless communism on its rise over the world. These liberals are marching beneath the Democratic flag that has a red star of communism emblazoned upon it.