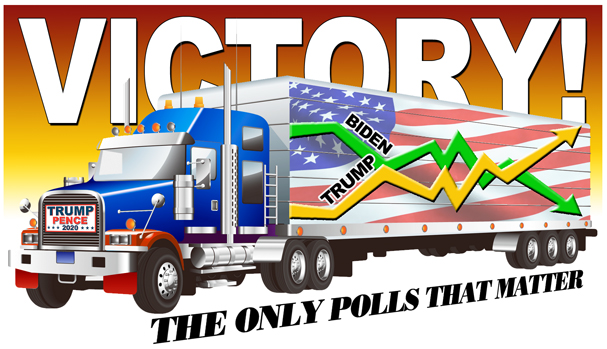 Tens of thousands of Trump voters emailed me to thank me for giving them hope when all seemed lost. Hundreds of conservative radio and TV hosts thanked me for keeping up the spirits of the “Trump Army” when Trump voters were at their darkest and lowest points.

For better or worse, that’s my best talent in life: seeing through the faulty math, lies, fraud and propaganda of pollsters and the mainstream media in order to keep Trump voters excited, motivated, focused and in the game.

Despite all the faulty polls showing a double-digit loss, I believe President Trump is on his way to a landslide electoral victory (slightly bigger than that in 2016). And I can prove it.

First, this election looks like a carbon copy of 2016. Every poll back then showed Trump headed for disaster. But I had a secret weapon. I called it The Taxi Poll. My buddy drove a taxi in Las Vegas. Every person who got in her taxi was told, “I’m doing a poll. It’s 100% confidential. I don’t even know your name. So, tell me, who are you voting for?” The results were overwhelmingly for Trump. I knew then what was about to happen.

Today, I have what I call The Truckers Poll. But it’s not just my trucker fans; it’s my fans who drive cross-country in their RVs. All of them report the same phenomenon. In Middle America, there are thousands and thousands of Trump lawn signs. But where are the Biden signs? There are almost none to be found.

Folks, understand this: What polls say doesn’t matter. What people say to pollsters doesn’t matter. What matters is only the votes of people in a few key battleground states, in particular Florida and the Midwestern states of Ohio, Michigan, Iowa, Wisconsin and Pennsylvania. My fans tell me these states are 100 percent Trump country. In small towns and outer suburbs, you can’t find any support for Biden.

It’s 2016 squared. After what Trump has done for the U.S. economy and manufacturing jobs and to win the trade war with China, he is a hero. People may not tell that to pollsters, but Trump is “the king of the Midwest.”

The media quotes nonstop any poll that shows Trump losing by double digits. But I never heard a word about the Democracy Institute Sunday Express poll from this week that showed Trump beating Biden 46% to 45% and winning almost all battleground states by a healthy margin. That poll didn’t oversample Democrats by a mile (as most other polls do) and polled only likely voters. Likely voters in battleground states are all that matter.

Or the Poll Watch poll released this week that shows Trump winning nationally, in battleground states and in the Electoral College. Trump dominates on the two issues that matter to most Americans: the economy and law and order.

Or have you heard that in the RealClearPolitics battleground average, Trump is slightly ahead of where he was at this time in 2016 (on his way to a victory over Hillary Clinton)?

Most importantly, a new Gallup poll reports 56% of Americans say they are better off now under Trump than they were four years ago under then-President Barack Obama and then-Vice President Joe Biden. Every expert knows what clinches elections — “It’s the economy, stupid.” A solid majority of Americans feel better off today than four years ago, despite COVID-19. You think they’re voting for Biden? By the way, that 56% is the highest number in the history of Gallup asking, “Are you better off today than you were four years ago?” Ronald Reagan got 44% in the Gallup poll and won the election in a landslide. Trump is at 56%.

They may not tell pollsters they are, but when they walk in the voting booth, they’re all voting for Trump.

If Americans aren’t yet convinced Trump is great for the economy, on Oct. 29, five days before the election, the third-quarter gross domestic product will be released. The Atlanta Fed estimates it will be 34.6% economic growth, the highest in the history of America — since 1776.

Still not convinced? Since primaries were born in 1912, no incumbent has ever lost the general election after receiving 75% or more of the votes from their party in the primaries. Trump received 94% of all cast in the 2020 Republican primaries.

One more factor: Because of fear of COVID-19, Team Biden has hardly knocked on any doors in America. But Trump volunteers have knocked on over 20 million doors in battleground states. Twelve million to zero. You don’t think that changes things on Election Day?

By the way, Biden and vice presidential nominee Kamala Harris had an event in Arizona on Thursday. Eight people showed up.

The liberal media is about to be shocked and awed on Nov. 3 – again. Trump is about to win an electoral landslide — again.

And this modern-day Paul Revere is right on the money – again.