Bill Lockwood: It is the Mammoth-Sized Government Which Destroys Lives 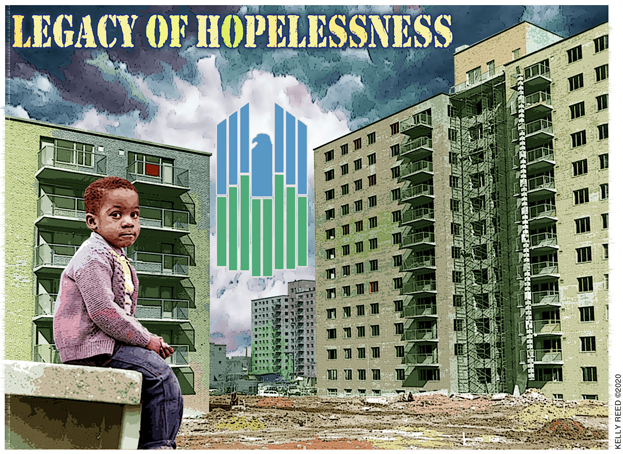 Whatever one may think about the United States’ Government leaders’ involvement in bringing about the 1930’s Depression, the crisis was certainly used by the Democratic left to usher us into an unconstitutional era of Big Government intrusion. And it is this mammoth-sized government which, in the name of assisting the poor, crushes the lives and liberties of citizens.

Setting the American people on the course of entitlement dependency – which is dependency upon government confiscated taxpayer money– Lyndon Johnson practically “precluded” a return to constitutionalism. One particular episode perfectly illustrates the destructive force of bureaucracy. It is the formation of the Housing and Urban Development (HUD) and its implementation of “urban renewal.”

As with its precursor, the Federal Housing Administration, HUD began using public monies to bribe the local communities to establish local housing authorities as receptacles to receive and dispense funds. As with all funds funneled through the federal government, these federal monies now controlled the projects themselves. One can see even today that every element of social and private life is controlled by Uncle Sam.

Illustrative of this is the fact that when massive housing structures such as Pruitt-Igoe in St. Louis were built, only “welfare families were entitled to the lowest rents.” But to receive welfare in Missouri a family could have only one parent—normally, the mother. The government itself thus incentivized single-parent families. Where there were two-parent families, a mom and dad, many of these families actually “lost a father” in order to move into Pruitt-Igoe.

“’The stipulation was that my father could not be with us,’ recalled a former tenant, Jacquelyn Williams. ‘They would put us into the housing projects only if he left the state.’” The social workers even policed apartments at night, checking to see if father had secretly returned, grounds for eviction. Williams remembered this all her life. “We’re giving you money, so we have the right to make stipulations as to how you use it.”

Next, “the only way to make grand-scale building possible [for public housing] was for the authorities to condemn and claim large swaths of private land.” For this they used the old doctrine of “eminent domain.” “Under the Fifth Amendment of the Constitution, this was the taking of private property for ‘public use.’” This was specifically constructed by the Founders for military and other public purposes.

But Johnson “began to bulldoze whole sections of cities, and then hand the land with its rubble to private developers. In Detroit, the violence to old neighborhoods was especially great.”

Black Detroit in the 1940’s and 1950’s lived packed in areas known as Paradise Valley and Black Bottom. The main retail thoroughfare, Hastings Street, was legendary, known the nation over because it was frequented by the singers and agents who later gave the country Motown music. Stores, churches, and homes stood tightly together, sometimes tightly enough to be called ‘slums,’ but often containing a vibrant life, much loved by the inhabitants.

However, liberty is lost in Big Government schemes, and regardless of what was and was not loved by the people who actually lived there, in “the eyes of the government, Black Bottom looked like blight. To the eyes of the auto unions and the Big Three automakers, pedestrian zones were a threat: highways that replaced sidewalks represented not only modernity but job security and high company share prices.”

The bulldozers leveled it all. Room was made for “public housing towers, for [Walter] Reuther’s Lafayette Park and for freeways. “Families had been herded into tall, anonymous apartment buildings, or had simply disappeared.” Hundreds of thousands of Americans, many poor or black, were evicted in this way.

Such grandiose government on the scale of Lenin was taken to court by home and business owners who resented the confiscation of their properties. As a matter of fact, both sides appealed to the Supreme Court. The homeowners and the government. In its decision, Berman v. Parker, Supreme Court Justice William O. Douglas “stretched the old concept of eminent domain like a rubber band.” His words are remarkable for the disdain of individual rights and the Constitution.

“’Public welfare,’ Douglas wrote, equating ‘public welfare’ with public use, should be ‘broad and inclusive.’ Authorized agencies could make their decisions about what to take freely.”

“’It is not for us to reappraise them,’ Douglas said. Douglas concluded by handing over his rubber band to government authorities. ‘If those who govern the District of Columbia decide that the nations’ capital shall be beautiful as well as sanitary, there is nothing in the Fifth Amendment that stands in the way.’”

Shlaes points out that more than 600,000 Americans were displaced by this totalitarian process.

Predictably, Johnson’s socialistic utopia of urban renewal failed. The vacancy rate of Pruitt-Igoe in St. Louis was at 23.9 percent and 29.3 percent, much higher than in the free market. Poor maintenance meant that elevators jammed, windows were regularly broken by wild youngsters, gangs of thugs lurked in the halls, and the entire community surrounding it became a sorry joke. Even the architect hired by Johnson, Minoru Yamasaki apologized publicly for Pruitt-Igoe.

In the end one cannot but draw the conclusion that it is the government itself which destroys lives. Pruitt-Igoe a perfect illustration.