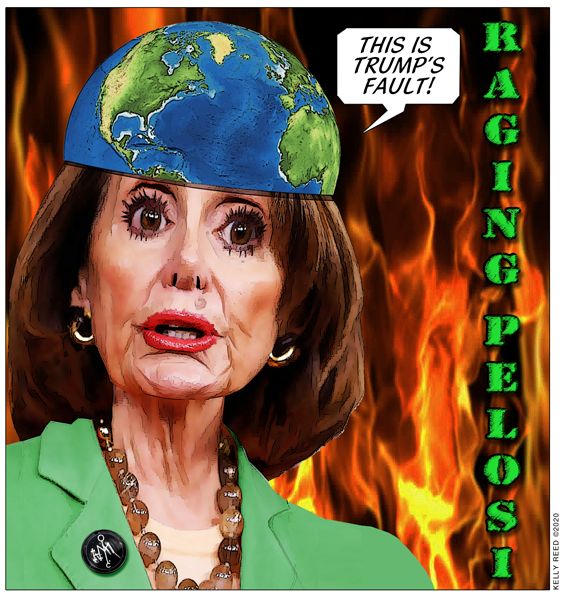 Nancy Pelosi, the San Francisco Democrat, tells Americans that the raging wildfires that have been burning in her home state of California, are due to a cryptic message that “Mother Earth” is sending Americans. “Mother Earth is angry” she warns. “She’s telling us—whether she’s telling us with hurricanes on the Gulf Coast, fires in the West, whatever it is … that the climate crisis is real and has an impact.”

California, Washington, and Oregon have been recently devastated by wildfires. There are currently 29 major wildfires in the Golden State alone, burning an area of more than 4,800 square miles, the AP reported. As of September 14, 35 people have died in the out-of-control wildfires.

What is of more than passing interest is Pelosi’s personification of “Mother Earth” as being “angry” with America, presumably for being so non-cooperative with the United Nations’ globalist agenda on the Environment.

When one reads the UN “Paris Agreement” that was adopted at the UN COP21 Conference, the “Marxist plot” is plainly visible. Setting up boards for “global governance” while finalizing “rules” for a “global common market,” the UN master plan promises to soak the American taxpayer to help pay people in the undeveloped part of the world to “save the climate.”

The UN Boss, Secretary-General Antonio Guterres, formerly of Socialist International, has openly declared that “climate action” offers a “compelling path to transform our world.” This will involve planetary taxes levied by a world government upon the United States because of our emissions of carbon dioxide (CO2). These monies will not only strangle our own industry, but be put into a slush fund to pay off dictators in underdeveloped countries.

Second, there is little science is Climate Alarmism. Dr. William Happer, an internationally renown Princeton physicist, recently spoke at COP25. He declared “We are here under false pretenses, wasting our time talking about a non-existent climate emergency.” Previously he had stated that more carbon dioxide in the atmosphere would be good for the planet and its population. “It’s hard to understand how much further the shrillness can go, as this started out as global warming, then it was climate change or global weirding, now it is climate crisis and climate emergency. What next? But stick around, it will happen.”

Happer is not the only world-class scientist who warns that America is being fooled. Retired MIT Meteorology professor Richard Lindzen has pooh-poohed the entire Climate Alarmism as having little to do with science and everything to do with politics. Socialist politics, that is, promoted and endorsed by the Democratic Party in the United States.

Steven Koonin, former U.S. Department of Energy Undersecretary, has written that climate science isn’t, in fact, settled and that we lack the knowledge needed to make sound climate policy (The Epoch Times, Sep. 9-15, 2020). In one article Koonin wrote:

The public is largely unaware of the intense debates within climate science. At a recent national laboratory meeting, I observed more than 100 active government and university researches challenge one another as they strove to separate human impacts from the climate’s natural variability. At issue were not nuances, but fundamental aspects of our understanding, such as the apparent—and unexpected—slowing of global sea-level rise over the past two decades.

Third, the American Left has been moving more closely to ancient paganism. One of the most remarkably outstanding features of Pelosi’s dire warning as she “speaks” for “Mother Earth” is this: she attributes goddess-like status on the planet which is messaging us about our climate sins. This is plainly a religious movement. And this, from the same crowd which has flagrantly ridiculed Christians for remotely suggesting that such things as the AIDS epidemic is a retribution from God upon America for its embrace of homosexuality. The legs of the lame are not equal.

Pelosi’s Paganism is idolatry. Idolatry is broadly defined as “the worship of idols, or the act of ascribing to things and persons properties which are peculiar to God alone.” The components of pagan idolatry is a View of the Past (A Cosmogony: how we came to be here); View of the Present (How the world works, including a value system); A View of the Future (What is the end game—the goal). Climate alarmists display all three.

One of the ancient pagan religions in the Old Testament was the worship of Moloch. Moloch, or Molech (1 Kings 11:7) was the god of the Ammonite people who lived next door to Israel, just as Chemosh was the god of Moab.

These gods were worshipped at “high places” throughout the Old Testament period. Connected with these gods was the pantheon of the Canaanites who honored Baal as one of their gods. These idolaters considered the seasonal changes as reflecting their ancient myths and consequently worshipped nature. More horrific still was the fact that these pagan religions all practiced child sacrifice, euphemistically mentioned in the Bible as “passing their children through the fire” (Lev. 18:21; Deut. 18:10).

Jeremiah, the prophet of God, who would come a bit later, stood at the valley of Hinnom and condemned it in chapter 19 of his book. “Because they have forsaken me, and have estranged this place, and have burned incense in it unto other gods, that they know now, they and their fathers and the kings of Judah, and have filled this place with the blood of innocents, and have built the high places of Baal, to burn their sons in the fire for burnt-offerings unto Baal, which I commanded not, nor spake it, neither came it into my mind …” therefore, “I will break this people and this city, as one breaks a potter’s vessel, that cannot be made whole again.”

If “Mother Earth” is angry, Nancy Pelosi, perhaps this question should be asked. “Why has she not already been propitiated by the millions of children aborted in America, encouraged and financed by the Democrat Party?” There is no difference in the slaughter of the unborn, overseen by socialists and High Priestesses such as Nancy Pelosi, and the sacrifice of children to Moloch.

A better question is: Isn’t it past time for America to give up its pagan errors and return to Almighty God?