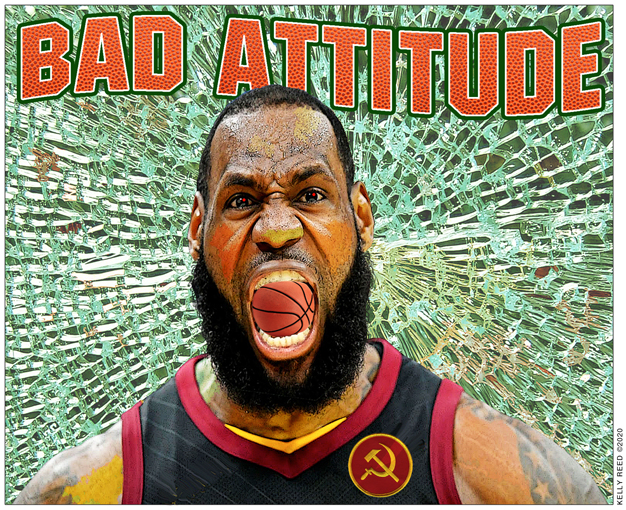 Pro sports in America are dying in front of our very eyes. This will be a story taught in business schools across America for decades to come. The story is about how to kill a multibillion-dollar empire overnight with just your big mouth.

It’s about killing the goose that laid the golden egg.

It’s about the massive disconnect between sports stars and their customers — the people who pay their grossly inflated and obscene salaries.

You are killing yourselves. It’s clearly suicide. Stop talking politics. You’re going to be playing in front of empty stands forever.

I warned you weeks ago your ratings would plummet — just as they did when Colin Kaepernick kneeled. I was right. NBA playoff ratings are down dramatically, falling 35 percent from 16 percent last year. But they’re down much worse from five years ago. Soon your ratings will plummet even further.

The more you scream about the Black Lives Matter movement and “social justice,” the more fans will tune out. Soon, your apparel and memorabilia will stop selling. You’ve made a tragic mistake and miscalculation.

Before I get to the reason pro athletes should keep politics away from their sports, let me ask LeBron James and his NBA pals a few very important questions.

LeBron, how come you never said a word, let alone threatened to end the season, over black-on-black violence in big cities across the USA? Thousands of black young men are dying on the streets of inner cities. Why don’t you care?

LeBron, how about Chicago? Why doesn’t it bother you that 50 to 100 innocent citizens are being shot there nearly every weekend? The victims are virtually 100 percent black. Why isn’t that worth a boycott?

LeBron, how about the innocent little black children murdered in gang shootings in big cities across America? It happens every day. Why doesn’t that bother you?

LeBron, how about the millions of black babies aborted? Why not cancel the NBA season for that? Why doesn’t that bother you?

LeBron, has any sports league EVER stopped playing or postponed playoff games for a hero cop murdered, or a hero soldier murdered? That’s not important to you?

LeBron, did you or your NBA pals stop playing to honor the black retired police captain in St. Louis killed by a thug during riots?

LeBron, did the NBA or any other sports league postpone games or threaten to end the season when a sniper murdered five Dallas cops in one day? Why didn’t that bother any pro athletes?

LeBron, did you or any pro athletes demand games be stopped for the little boy shot in the head and murdered two weeks ago? He happened to be white. The man accused of murdering him happens to be black. That has to be one of the most shocking crimes in recent American history. Who kills a smiling, happy 5-year-old on his bicycle, execution-style? But I never heard a peep from one NBA player. Why? You didn’t notice?

Is the execution of a 5-year-old less important to you than a white cop killing or wounding a black criminal who has a long criminal record and refuses to obey orders from a police officer? Really?

LeBron, isn’t it strange that neither you nor your NBA pals ever gave a damn about human rights violations in China? There are billions of dollars to be made looking the other way, while communist China abuses, arrests, tortures, and murders its own citizens. China is said to have concentration camps for Muslims. But you know that, right? Obviously, none of that is a problem for NBA players if billions of dollars are at stake.

You don’t seem to notice the black crime perpetrated upon white citizens. I think that’s important, too, don’t you? I think it’s fair game. I think we need a national discussion and debate. I think it’s a two-way street.
By the way, LeBron, if you feel so strongly about ending the season for a bad guy who wanted to kill cops with a knife, what’s stopping you? You should go home. Let other players, who want to play, play.

And I have the perfect idea for the NFL players thinking of forfeiting a game this season in “honor” of Jacob Blake, the career criminal accused of sexual assault, who fought officers and threatened to kill them with a knife. If that person is worth taking a stand over, then I think they should quit football. Become a full-time social justice warrior. It doesn’t pay $5 million to $10 million per year. You’ll make about $25,000 a year. How’s that sound? Are you willing to give up football to fight for social justice full time? I didn’t think so.

So, forgive me if all of your customers aren’t on your team on this one.

LeBron, my advice is simple: SHUT UP! You’re alienating your customers. You’re offending your customers — you know, the ones who pay the grossly inflated and obscene prices for game tickets, parking, food, and sports apparel.

Sports and politics don’t mix. We tune in to the games to get away from politics. Keep violating that rule and there will be no fans left to pay your grossly inflated and obscene salaries.

LeBron, pull back from the ledge. Because this is suicide.