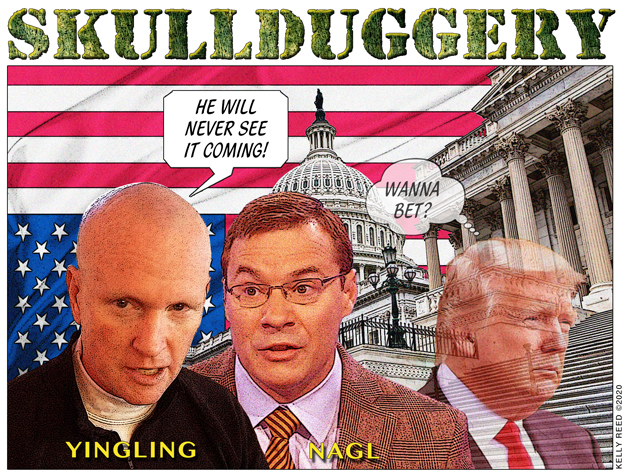 “If Donald Trump refuses to leave office at the expiration of his constitutional term, the United States military must remove him by force …” “the one-unthinkable scenario of authoritarian rule in the United States is now a very real possibility.” The “clock will strike 12:01 PM, January 20, 2021, and Donald Trump will be sitting in the Oval Office.” So write two retired Army officers, John Nagl and Paul Yingling, to General Alexander Milley, the chairman of the Joint Chiefs of Staff, according to a news release of defenseone.com.

“The street protests will inevitably swell outside the White House, and the ranks of Trump’s private army will grow inside its grounds. The speaker of the House will declare the Trump presidency at an end, and direct the Secret Service and Federal Marshals to remove Trump from the premises. These agents will realize that they are outmanned and outgunned by Trump’s private army, and the moment of decision will arrive.”

Nagl and Yingling suggest that “U.S. military forces escort the former president from the White House grounds” while urging the senior officer of the United States that his “duty is to give unambiguous orders directing U.S. military forces to support the Constitutional transfer of power.”

America is not only seeing the systematic demonization of law enforcement by the Democratic Party, the gutting of police forces throughout the nation, but now an organized effort is already in the works to legitimize a military coup against President Donald Trump.

Both Yingling and Nagl are retired Lt. Col.’s from the Army. Yingling fought in the Gulf War and has been deployed to Bosnia. He later earned a degree in international relations from the University of Chicago and taught at West Point. Nagl is a Rhodes scholar from Oxford University, a former instructor at West Point, and is currently the headmaster of The Haverford School for young men in Haveford, PA.

Their letter is addressed to General Mark A. Milley, U.S. Army general and current the Chairman of the Joint Chiefs of Staff.

Using the Socialist/Democratic playbook of fearmongering in order to manipulate the public, the retired officers raise the specter of president Donald Trump refusing to leave the White House. “We do not live in ordinary times,” they warn. President Trump “is actively subverting our electoral system, threatening to remain in office in defiance of our Constitution.”

This dire admonition is due to the fact that Trump has questioned the integrity of an election based upon mail-in voting, for which the Democrats are now pressing. However, it was House Judiciary Committee Chairman Jerry Nadler (D-NY) who warned in 2004 that paper ballots are “extremely susceptible to fraud.” Now that Trump issues the identical warning it is taken as a secret plot to remain in the White House despite an election. The legs of the lame are not equal.

The Army officers worry about Trump ignoring the Constitution. Where were Yingling and Nagl as President Obama single-handedly shredded the Constitution with scores of unconstitutional actions such as the 2011 Invasion of Libya without congressional approval; the unconstitutional full-court press for ObamaCare built upon the grand public lie that “if you like your doctor you can keep your doctor”; the vicious targeting of Tea Parties by the IRS; the inauguration of public policy called DACA for illegals– solely from Obama’s hand, plus the issuing of work and residence permits despite Congress’ lack of movement on the topic; or Obama’s EPA Cap and Trade orders in 2015 which set limits on carbon dioxide emissions which Congress had specifically rejected in 2009; and a host of other dictatorship actions?

The imperial presidency of Barack Obama did not bother the Army commanders as much as that Trump has expressed concerns with mail-in voting. “Mr. Trump may refuse to leave office,” they gravely warn.

Once again, gentlemen, that was President Obama, whose socialist comrades in Congress supported a repeal of the 22nd Amendment—the removal of the two-term limit set on presidents. This striking move was offered by NY Rep. Jose Serrano in order to allow the dictatorial presidency of Obama to continue.

Yingling and Nagl even wring their hands that to solidify Trump’s unconstitutional stay in the White House, the president has raised a “private army” of “little green men” that will have to step aside for a “good morning’s work for a brigade of the 82nd Airborne.” If the US military remains “inert” the “Constitution dies.”

Once more, Yingling and Nagl have been firing their weapons in the wrong direction on the range. It was former President Obama, while campaigning in July 2008, who ominously called for a national police force.

“We cannot continue to rely on our military in order to achieve the national security objectives that we’ve set. We’ve got to have a civilian national security force that’s just as powerful, just as strong, just as well funded.” That was no problem with these veterans. But the fiction of a private army of “little green men” that will have to be swept aside by military force is a real possibility.

It is difficult to imagine a greater danger to the Republic of the United States that rogue commanders such as Nagl and Yingling actually floating ideas to the Joint Chiefs of Staff against President Trump. They are evidently laying the groundwork for a military coup against him and should be disciplined in military court. Instead, they will receive backing from the Democrats.

It is a later hour than one might think.