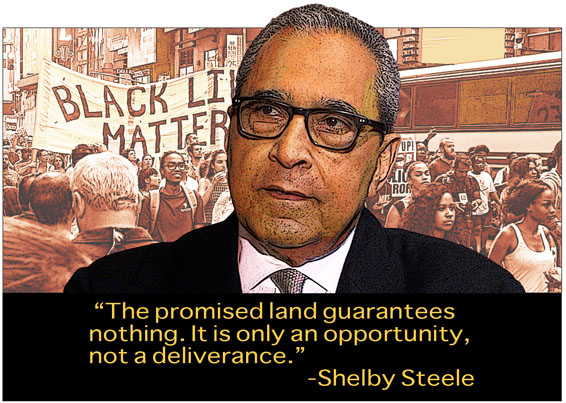 Shelby Steele came of age in the “radical ‘60’s”—when America’s character began to fall apart. Personally moving from a position of “black anger” to a mature conservatism over the years, he presents an incisive and clear diagnosis of America’s most pressing cultural problem—race. (White Guilt: How Blacks and Whites Together Destroyed the Promise of the Civil Rights Era)

Steele begins with personal experiences of segregation in the 1950’s wherein “white supremacy” was the norm and moves the reader through the current morass wherein “white guilt” now controls the narrative in America. “White guilt” is Steele’s characterization of the primary cultural concept that has been absorbed by the majority population. This was because of historical wrongs to black America, such as slavery and segregation.

Steele uses the term “disassociation” to explain how “white guilt” continues to drive the political and cultural agenda in the western world. By “disassociation” Steele references the continuing effort of white America to distance themselves from the racism of America’s past. Everything from public policy to collegiate admissions to housing and social behavior has been dictated by this disassociation or “white guilt.” Unfortunately, explains Steele, this is a complete hijacking of the civil rights movement of the 1960’s.

Steele begins his diagnosis with the observation that President Bill Clinton politically survived his sexual immorality with Monica Lewinsky. But that sexual scandal would have destroyed the presidency of Dwight Eisenhower. On the other hand, the rumor was that Eisenhower used the “n word” in referring to blacks; but Bill Clinton would never have survived had he done that.

So what changed? Morality has become relativistic in America– but “there is no moral relativism around racism, no sophisticated public sentiment that recasts racism as a mere quirk of character” (p. 5). Even the hint of “racism” is enough to destroy one’s career. Steele finds the answer to all of this in Lyndon Johnson’s Great Society programs. Two years before Johnson launched the Great Society he stated in the famous Harvard University speech, “You do not take a person who, for years, has been hobbled by chains and liberate him, bring him up to the starting line in a race and then say, ‘You are free to compete with all the others.’”

Johnson’s Great Society, however, has had a deleterious if not disastrous effect upon the culture of America. It has embedded the assumption that though there may have been racism against blacks in the past, the white culture continues to be racist and operates upon that reality. Everything occurring now in America is seen by the main stream culture as through this prism.

Effects of the Great Society

In slavery, blacks were not free, “but they were not entirely responsible for their lives” (p. 46). The Great Society ingrained this same principle into the black community—no responsibility. We are witnessing the results of this on the streets of America today.

Blacks have little or no responsibility to do well in school. Since African-Americans have been victims of injustice in the past, our standards are lowered in academia to accommodate minority achievement. We have included all manner of gimcrack educational ideas, the ‘beauty’ of which was that they always promised to let us achieve great things by demanding less of our students and of ourselves.

We talked of ‘black ways of knowing,’ which, of course, effectively gave all black teachers a kind of racial teaching credential that whites could never have. We devalued rigorous academic work by insisting that black students learned ‘experientially’ and ‘intuitively,’ and by arguing that ‘street knowledge’ was often more valuable than ‘book’ knowledge. There were certainly exceptions to all of this, people who worked earnestly with their students and taught substantive classes. But these serious people found themselves in an atmosphere of black excuse-making and incompetence … (119-20).

Another obvious result of the Great Society is that the concept of diversity is paramount above all other considerations. Campuses, government jobs and private places of business must tout “diversity” or be accused of racism. Diversity has become the god in America, effecting even Supreme Court decisions. Steele offers the landmark University of Michigan Affirmative Action case (2003) as an example. Justice Sandra Day O’Conner’s majority opinion has some “odd reasoning,” to say the least.

O’Conner borrowed “pseudoscientific doublespeak”—“learning outcomes,” “soft variables,” “selection index,” “nuanced judgments,” “critical mass,” and “holistic reading”—O’Conner piles one social science banality on top of another, hoping against hope that we buy her tall tale of ‘diversity’ as so ‘compelling’ a state interest that it justifies racial preferences. Her opaque language is a textbook illustration of George Orwell’s famous critique of political language as words used to ‘obscure’ and hide reality rather than to illuminate it (p. 127-28).

In turn, the god of “diversity” has birthed an entire “quota” system—spoken or unspoken—for almost every system in America, whether it be in education, job markets, and personal associations. African-Americans must be included, regardless of real achievement.

As an illustration of how strong this mantra is, Steele asks us to consider the fact that the very “possibility of racism” is enough to overturn science. DNA testing meant less in the O.J. Simpson case than did the possibility that Mark Fuhrman, one of the investigators in the O.J. Simpson case, had used “racist” terminology to refer to blacks. DNA and science, which should be an open and shut case, was thrown out due to racism.

Ethnic studies in schools is another form “disassociation.” Steele gives a personal illustration from a collegiate campus that included obvious sub-standard literature studies for students simply because the authors were black. He comments that “inclusion” has now become a literary value all its own.

Poverty itself is seen unrelated to personal dysfunction of those who suffer it. Once again, the removal of responsibility. This, in turn, has brought about the “treatment” by government “interventions” and more redistribution of money—of which we can never have enough. “With this ‘blameless’ poverty (poverty that never ‘blames the victim’), the government can be responsible for poverty even as it lacks authority over it.”

Steele explains how this has brought on big government. “So ‘blameless’ poverty is not more than a white ingenuity which allows institutions to steal responsibility for a problem they lack the authority even to honestly define” (p. 122).

In the end, white America is always trying to “prove a negative.” Prove they are not “racist”—which is the given assumption of our culture. But proving a negative is never possible. White America might elect the first black president in Barack Obama, they may have submitted to racial preferences in hiring and admissions for fifty years, they may have financially supported LBJ’s Great Society to the tune of billions of dollars—but that is never enough.

Now our culture is bombarded with efforts to dismantle America entirely. The newly proposed bill sponsored by Reps. Rashida Tlaib of Michigan and Ayanna Pressley of Massachusetts is a case in point. These Democrat women unveiled this week the BREATHE ACT which de-funds the Police, abolishes surveillance tactics which they say “disproportionately” targets minority communities, ending asset forfeiture, repeal laws that criminalize illegal immigration, encourages states to actually close down detention facilities, and eliminate gang databases while forgiving all fees and surcharges within the justice system.

The bill also demands reparations for mass incarcerations for blacks who have been “caught up in the War on Drugs” or been the victims of police violence and it eliminates federal programs and agencies used to finance ICE.

This is tantamount to a country with no borders, no responsibility required by its minority citizens, and no enforcement mechanism when laws are broken. The only reason such proposals has any legs is due to what Shelby Steele correctly calls “White Guilt.” It is a concept that will completely destroy the fabric of America.