Bill Lockwood: Stealth Jihad and the Islamization of America 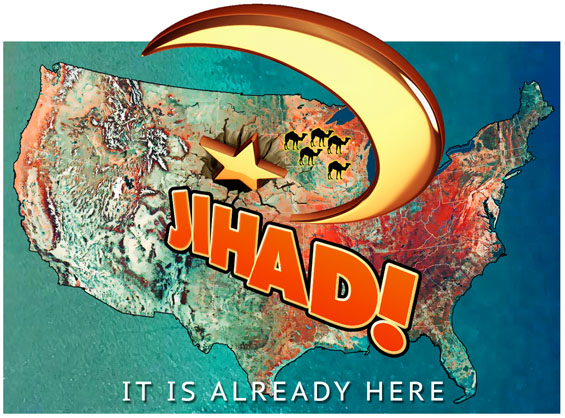 Islam divides the entire world into two sectors: “Dar-al-Islam” (House of Islam) and “Dar-al-Harb” (House of War). The only countries that are considered to be at peace with Islam are those which enforce Shari’a Law. This is because Islam does not recognize the right of any other religion to exist. America at large is thus a part of the “House of War.”

Muslim leaders world-wide have been bold and blatant that their efforts are toward an Islamic-dominated world. Iranian leader Ahmadenejad declared it (2006); Leading Muslim cleric in the UK Anjem Choudary insisted that the Muslim flag will one day “fly over the White House;” the Council on American Islamic Relations (CAIR) chair Omar Ahmad confessed in 1998 that the Islamic goal is “to become dominant worldwide;” and the Muslim Brotherhood has given us “The Project”—a 100 year-plan to establish “Islamic government on earth.”

The Muslim Brotherhood, created in Egypt in 1928 by Hasan al-Banna, claims to have more than 70 affiliated terrorist organizations throughout the world. It states that “Allah is our objective. The Prophet is our leader. Qur’an is our law. Jihad is our way. Dying in the way of Allah is our highest hope.”

Note that they define “jihad” for us. It involves “dying in the way of Allah.”

“Jihad” is the sacred obligation to impose Islam upon the entire world. This is not the creation of a few extremists or the hijacking of a peaceful religion by a handful of radicals. Jihad is mandated in the writings of the Quran, was practiced in bloody earnest by the false prophet Muhammad, and is overwhelmingly defined by classical theologians, jurists and traditionalists as a military concept of “waging war.”

According to the eminent scholar of Islamic history and culture at Princeton University, Bernard Lewis, the late Cleveland E. Dodge Professor Emeritus of Near Eastern Studies at Princeton,
[the] term ‘jihad’ has usually been understood as meaning ‘to wage war.’ The great collection of hadith all contain a section devoted to jihad in which the military meaning predominates. …According to Muslim teaching, jihad is one of the basic commandments of the faith, an obligation imposed upon all Muslims by God, through revelation … It must continue until the whole world has either accepted the Islamic faith or submitted to the power of the Islamic state.

Students in public schools today learn the “5 Pillars of Islam” inclusive of prayer, alms, pilgrimage, and so forth. However, the instructional materials in our public schools normally do not include the 6th Pillar. Jihad is the 6th Pillar. So important was “Jihad” (Religious fighting for Allah) that Muhammad declared it the second most important deed in Islam. (Hadith by Bukhari, Vol. 1, no. 25).

Some Muslim clerics inform us that “jihad” can mean “inner struggle” as in a person who “struggles” for inner mastery over sin. This definition is “taqiyya”—or lying. Jihad, in the authoritative materials of Islam, uniformly means fighting for political mastery.

Muhammad himself stated that “The person who participates in Jihad (Holy Battles) for Allah’s cause and nothing compels him to do so except belief in Allah and His apostle, will be recompensed by Allah either with a reward or booty (if he survives) or will be admitted to paradise (if he is killed.)” (Vol. 1:35).

Some Muslims may ignore jihad or disregard it—and we are glad they do– but it is certainly not defined in the authoritative Islamic texts as “inner struggle.” Further, this is not a matter of “interpretation”—but of either acceptance or rejection by Muslims.

It is very difficult for Christians to understand, but Islam is a militant movement which has as its primary aim not spiritual, but political goals. The ultimate purpose of Islam is the establishment by force of a worldwide Islamic state where Shari’a law is enforced.

This brings us back to the Muslim Brotherhood. Their outlined strategies for western world takeover include the “appearance of moderation,” the “use of deception to mask good,” the “extensive usage of social networks,” and to “cultivate Islamist intellectual community;” “using Western institutions until they convert them into the service of Islam.”

Changing the laws of the United States is the primary target. Stealth Jihad. As Muslim Brotherhood leader Qaradowi stated, “jihad can be fought with the pen, then the sword.”

The great world-class scholar and former president John Quincy Adams warned America regarding Islam. His comment was that Muhammad had

poisoned the sources of human felicity at the fountain, by degrading the condition of the female sex, and the allowance of polygamy; and he declared undistinguishing and exterminating war, as a part of his religion, against all the rest of mankind. The essence of his doctrine was violence and lust: to exalt the brutal over the spiritual part of human nature. … Between these two religions [Islam and Christianity], a war of twelve hundred years has already waged. The war is yet flagrant … while the merciless and dissolute dogmas of the false prophet shall furnish motive to human action, there can never be peace upon earth, and good will towards men.