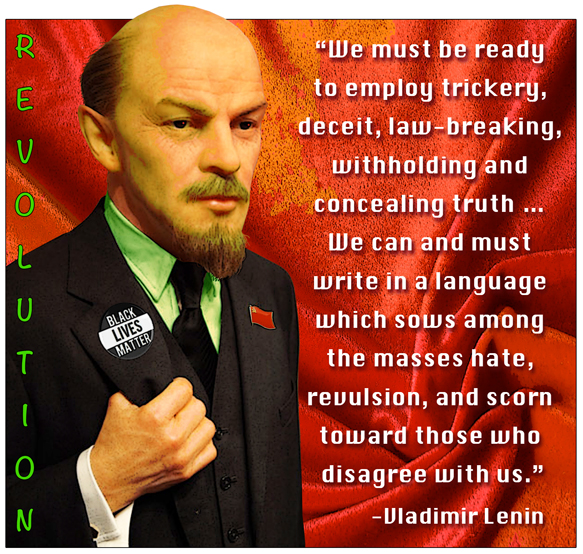 Black Lives Matter (#BLM) is a communist-inspired movement which, in the words of Larry Grathwohl, former FBI informant in the Weather Underground, exploits blacks and other minorities groups to turn them into revolutionaries fighting for socialism in the United States. The death of George Floyd is not the cause of the burning of America but the excuse.

This is not to say that white youth have not also been ignorantly sucked into the communist revolution, for many have been trained by Marxist professors at our state universities. The coalescing of all of these young radicals who are agitating for an “Abolish the Police” movement has been occurring since the 1960’s.

As stated on the Freedom Road Socialist Organization website (which changed its name in 2019 to simply Liberation Road), “The FRSO is recruiting and building towards the creation of a new Communist Party based on Marxism-Leninism. This is necessary to lead the way to socialism and liberation.” The FRSO is the “guiding force” behind Black Lives Matter.

BLM launched in 2013 with the Twitter hashtag, #BlackLivesMatter, following the George Zimmerman acquittal in the shooting of Trayvon Martin. It was founded by three radical leftist women; Patrisse Khan-Cullors, Alicia Garza and Opal Tometi. All three of these founders work for “front groups” of the FRSO.

Cullors describes herself as a “working class, queer, black woman.” At a 2015 Netroots Nation conference, she led chants shouting, “If I die in police custody, burn everything down … rise the f____ up! That is the only way the m_______f_______s like you will listen!” (Accuracy in Media expose).

Cullors was trained by Eric Mann, a former Weather Underground communist who exhorts his followers to become “anti-racist, anti-imperialist.”

Garza claims that she is “queer.” She is an Oakland-based writer whose articles have been featured in major Main Stream Media publications. Her claim is that the “tragic deaths of Trayvon Martin and Mike Brown were catalysts for the emergence of the BLM movement.” Both of those young men, however, were shown to be street thugs who were killed by individuals protecting their own lives from their vicious assaults.

Tometi is the daughter of illegal aliens from Nigeria. She worked for the communist-founded ACLU while in college and is currently executive director of Black Alliance for Just Immigration (BAJI).

These women are joined by Nelini Stamp, who popularized the phrase “Hands Up, Don’t Shoot!” which was a manufactured lie emerging from the Michael Brown case. Nelini Stamp has said: “we are actually trying to change the capitalist system we have today because it is not working for any of us.”

The FRSO is a “hereditary descendant of the New Communist Movement inspired by Chinese dictator Mao Zedong and the many communist revolutionaries occurring throughout the world in the 1960’s and 70’s” (James Simpson, Capitalist Research Center).

In 2016, Freedom Road mourned the death of Tim Thomas, one of its leaders. The blogpost stated that Tim “was a revolutionary organizer, writer and educator … At George Washington University, Tim became active in the Black Liberation and Marxist movement that remained his life-long passion….Tim was a leader of the SOBU (Student Organization for Black Unity) and later YOBU (Youth Organization for Black Unity).”

Tim Thomas, the statement goes on to eulogize, “joined the Revolutionary Workers League in 1972 and later the League of Revolutionary Struggle (LRS), a New Communist Movement group that brought together in one organization Asian-American, Chicano, Puerto Rican, African American, and white communists who shared a vision of national liberation as a critical element of communist revolution. After that group dissolved in 1990, Tim and a number of former LRS comrades came into the Freedom Road Socialist Organization, where they continue to advance the theory and practice of self-determination socialism.”

The goals of FRSO as well as BLM are pretty clear.

The FRSO began officially in 1985 when two smaller organizations, Proletarian Unity League and the Revolutionary Workers Headquarters, formed the FRSO. Bot the PUL and the RWH were a part of the New Communist Movement. Other groups such as a West Coast group called the Organization for Revolutionary Unity joined hands with the FRSO through the years.

The BLM, being a spin-off of the FRSO, has had much help from communists such as Van Jones to obtain funding. Van Jones is another communist who has been given so much favorable media coverage in the MSM, even earning a place at round table discussions on a variety of news stations.

Some of the wealthy foundations which supply financial backing to BLM and FRSO as well as other satellite sister organizations spawned by this communist revolution include Ben & Jerry’s, Ford Foundation, Kellogg Foundation, Rockefeller and many of George Soros’ sponsored groups such as the Tides Foundation.

BLM’s mission includes a kitchen sink of favored Left causes, including support of poverty elimination programs, prison deinstitutionalization, illegal immigration and gay rights. Highlighting FRSO’s orientation toward gay blacks, it describes how ‘Black, queer and trans folks bear a unique burden from hetero-patriarchal society that disposes of us like garbage and simultaneously fetishizes us and profits off of us, and that is state violence.

As Vladimir Lenin stated, “We must be ready to employ trickery, deceit, law-breaking, withholding and concealing truth … We can and must write in a language which sows among the masses hate, revulsion, and scorn toward those who disagree with us.”

Writing in 1962, biblical scholar and anti-communist lecturer, James Bales exposed in Communism: Its Faith and Fallacies, the primary goal of communists for the crumbling of America was to Incite Racial Minorities. “The Chinese Communists have also tried to incite racial minorities to rebellion” (Quoted from Soviet Russia in China, 361).

Bales observes: “For a period of time they advocated Lenin’s doctrine of so-called ‘self-determination for all racial groups.’ This was in order to weaken a nation by promising independence to each racial group within it. Thus for years in America the communists advocated the idea of a black republic in America. This they called ‘self-determination for the black belt.’”

Although this specific strategy has morphed into others, Bales warned:

The united front movement is being revived. Open and hidden communists are endeavoring to use racial problems as a means of dividing our country and making and using for their own purposes those who are blind enough to form temporary alliances with them. They are not interested in solving these problems but in weakening the country so that it will be easier for them to take over.

America has not heeded the warning. Instead, our young people continue to be indoctrinated by many public schools and universities. Even Christians and church members, coming to the “communist game” in America in the last inning, ignorantly think the death of George Floyd and its violent aftermath is all about police brutality. They tweet #BLM to join the chorus. But it is our ignorance of the real roots of what is happening in America is what will destroy us.