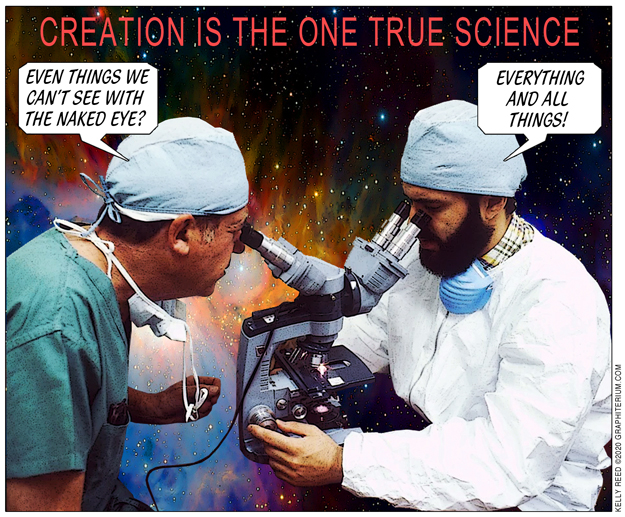 First, scientific investigation is based upon the concept of rationality.  Rationality is simply drawing the conclusions as warranted by the evidence.  That is, the law of correct thinking.  But what is “correct thinking” if atheism and its doctrine of spontaneous generation is true?  If reason is just a physical sensation … there is no reason for the atheist or evolutionist to say that he is using his mind and the theist is not.  Matter in motion would have produced in the atheist his atheistic arguments and matter in motion would have produced in the theist his faith in theism.  There is no reason why one should be accepted as the true insight into reality over the other.  Atheism or evolutionism gives us no confidence that it could possibly be the true insight into reality.

Second, scientists admit that the foundations of true science are found in a Christian world-view. Stanley Beck, an evolutionist writing in Bioscience (1982), confessed that the basic premises of science find their foundation or origin in Christian theology.  That is to say, that since the world was created by a divine Creator and man was created in God’s image, therefore nature makes orderly sense, man is able to decipher its operations, and true science becomes possible.  If the world, on the other hand, was a mere product of jumbled masses of atoms and our brains were nothing more than jumbles of matter and electrical impulses, science itself becomes nonsense.

Third, some evolutionists confess that given evolution (as opposed to Creation), man has no free moral choice.  William Provine, who died in 2015, was a professor in the Department of ecology and Evolutionary Biology at the distinguished Cornell University, lectured at the University of Tennessee in Knoxville in 1998. His remarks included the following: “Naturalistic evolution has clear consequences that Charles Darwin understood perfectly. 1) No gods worth having exist; 2) No life after death exists; 3) No ultimate foundation for ethics exists; 4) No ultimate meaning in life exists; and 5) Human free will is non-existent.” Provine spent the balance of his time discussing “free will” because he noted “the first 4 implications are so obvious to modern naturalistic evolutionists that I will spend little time defending them.”

Provine was exactly right, given his naturalistic premises. There would be no such thing as free will if the general theory of evolution is true. These considerations alone ought cause professors of science today to rethink commitment to the ungodly doctrine of evolution. Creation gives man his only basis for True Science.