Bill Lockwood: Socialism as a Religion 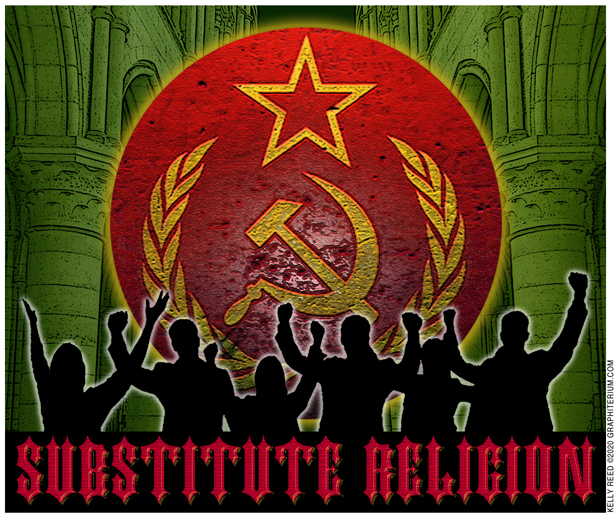 Marxists profess to reject religion in favor of science, but they cherish a belief that the external universe is evolving with reliable, if not divine, necessity in exactly the direction in which they want it to go. They do not conceive themselves as struggling to build the communist society in a world which is of its own nature indifferent to them. They conceive themselves as traveling toward that society in a world which is like a moving-stairway, but walking in the wrong direction. This is not a scientific, but in the most technical sense, a religious conception of the world. (Max Eastman, Marxism—Is It Science?)

Max Eastman (1883-1969) was a prominent editor, political activist and “prominent radical” who, like many in Woodrow Wilson’s “progressive” America, became infatuated with Marxism. Eastman traveled to the Soviet Union to learn firsthand how to be a good socialist and became friends with Leon Trotsky. Years later, when Eastman became convinced that socialism is void of validity, he reflected upon his time as a Marxist. “I sadly regret the precious twenty years I spent muddling and messing around with this idea, which with enough mental clarity and moral force I might have seen through when I went to Russia in 1922” (Reflections on the Failure of Socialism).

Socialism is not normally classified as a religion, but when its doctrines are examined, it more closely resembles a religious concept than anything else. The only difference between socialism and Christianity is that the latter is grounded upon historical fact while socialistic faith is founded upon unproven assumptions. Communism particularly is a philosophy of faith in the dialectic—the zig-zagging of history onward and upward to a more perfect society.

Nikita Khrushchev was appealing to this “dialectic” when he said that history was on their side and they (Soviet Union) would bury us (J.D. Bales, Communism, Its Faith and Fallacies, p. 102). “Communists represent the antithesis which the dialectic has decreed with destroy us, the thesis. It is this faith which helps keep the rank and file members at their tasks when the going is difficult.” This is also, we might add, why myriads of collegiate students, trained by their Marxist professors, continue to march fanatically to the drumbeat of socialism.

Because of the religious nature of socialism, it was a simple matter for Norman Thomas (1884-1968), to trade his ministerial garbs and Presbyterian beliefs for a heaven-on-earth utopia strategy of socialism. He became known as “Mr. Socialist” in America.

Thomas, in turn, was heavily influenced by the 19th-century Social Gospel “theology” developed by Walter Rauschenbusch. Rauschenbusch was himself a Baptist preacher of the 19th century who mixed a version of modernistic “Christianity” together with Marxism to craft what became known as the “social gospel.”

The key to Rauschenbusch’s theology was his concept of the Kingdom of God. To him, this Kingdom was not located in another place called heaven or in a future millennium, but could best be described in modern terms as a level of consciousness in which one recognized the immanence of God in human life and the interconnected, interacting, interdependent nature of the entire human species.

So writes Dr. Elizabeth Balanoff, professor of history at Roosevelt University in Chicago in her paper, “Norman Thomas: Socialism and the Social Gospel.” “Walter Rauschenbusch was convinced that this was the original Christian vision which had been distorted and lost with time, and that it was possible to regain it.”

Because of the religious nature of socialism, H.G. Wells stated: “Socialism is to me a very great thing indeed, the form and substance of my ideal life and all the religion I possess.” Mr. Edmund Optiz, writing in Foundation for Economic Education (1969) observed that “As a religion, Socialism promised a terrestrial paradise, a heaven on earth.” This is why Optiz called Socialism “A Fanatic Faith.”

Max Eastman, in his 1962 book, Reflections on the Failure of Socialism, related that Norman Thomas, “in his rather pathetic Democratic Socialism, A New Appraisal (1953), throws overboard everything that gave distinct meaning to the word socialism, but continues to drive along in the old bandwagon with the name printed on it in large letters.”

For example, Eastman points out, Thomas’ words were “Socialism will do this, …” “Socialism will do that …” But Eastman asks, “how does that differ from what he preached as a Christian minister before his conversion to socialism?” In other words, socialism and Marxism are nothing less than a “religious-type” of conviction that has jettisoned biblical promises of heaven for a “garden of Eden” on earth. As stated succinctly by Mr. Socialism himself, his socialistic philosophy was an “implicit religion.”

Because socialism is in reality an implicit religion, Spargo & Arner, who virtually wrote the textbook on Socialism, called Elements of Socialism (1912), tell us that not only is a “future life” such as heaven an “invention of man” but that God Himself is a “construct of the human mind.” They present socialism as an “alternative to Christianity” which infuses a passion for perfection “without God” and “without heaven.” Further, it is based upon the general theory of evolution (p. 63, 75, 111, 206, 222), which itself is a theory designed to replace belief in God.

As does everything that seeks to replace biblical Christianity, socialism presents a misdiagnosis of what ails mankind. Dishonesty is not “in property ownership” (Spargo & Arner, 23); poverty itself is not an evil (p. 39); world peace is not the ultimate goal (p. 202); and “social injustice” is not the devil incarnate (p. 46). This is why Mr. Edmund Optiz describes socialism as a modern, “this-worldly” religion.

The real problem with man lies within his/her heart—it is called sin. “Above all else, guard your heart, fro everything you do flows from it” (Proverbs 4:23). Sin is a violation or transgression of God’s Almighty Law (1 John 3:4). All men have sinned and fallen short of God’s glory (Romans 6:23). There will be no improvement of society until humanity faces the stark reality of sin imbedded in the heart. Only when the corruption in the world is given its proper diagnosis can people turn to the only real healing—forgiveness in Jesus Christ (Romans 3:21-23).