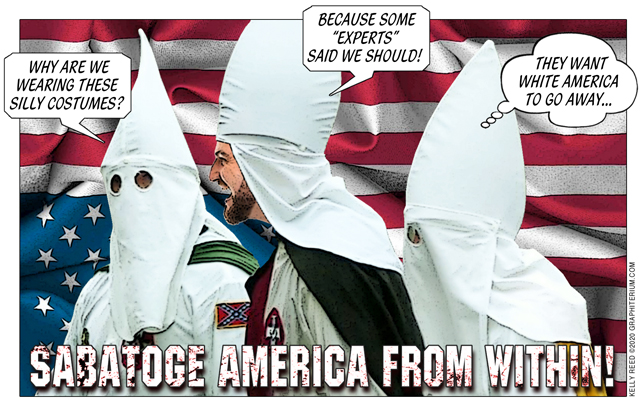 We have seemingly heard more how racist is white America within the last decade than ever before. The British Academy Awards this year featured Joaquin Phoenix lecturing the film industry for its “systemic racism.” The United States Conference of Catholic Bishops published a “pastoral letter” in 2018 which indicts the entire western culture for being racist at a “systemic” level.

What exactly is systemic racism? According to theconversation.com, which published the article regarding Joaquin Phoenix, “systemic” or “institutional” racism refers to how “ideas of white superiority are captured in everyday thinking at a systems level: taking in the big picture of how society operates, rather than looking at one-on-one interactions.” These “systems can include laws and regulations, but also unquestioned social systems,” such as education and hiring practices.

For clarification, this crime is not, in official politically correct thought, imbedded within other races of people—only whites in western culture. Those who harangue the loudest about systemic racism refuse to mention the current South African crisis in which open genocide is occurring against white property owners by the black communist group African National Congress (see article by Alex Newman, The New American, “South Africa Facing White Genocide: Total Communist Takeover,” August, 2012).

The socialist-inspired conclusion that the bishops wish one to draw is the assumption that disparities result because foul-play must be involved. People of color suffer injustices from “white society.” But differences among peoples and subcultures as a possible cause is never considered—that would be the “politically incorrect” thing to do. No discussion ever occurs on whether or not minority subcultures actually value different ideas. No examination of personal choices; no study of what minority cultures may be infusing into its own people; no time pondering divergent habits or values that may be ingrained in minority populations—simply announce that America is a “racist” society—systemically so.

What about other statistics which show disparity? For example, out-of-wedlock birth rates for different racial and ethnic groups in 2008 was just over 40 percent. The breakdown of that statistic shows that among white non-Hispanic women, the out-of-wedlock birth rate was 28.6 percent; among Hispanics it was 52.5 percent; but among blacks the figure jumps to a startling 72.3 percent.

What about abortion? In 2005 the abortion rate for blacks in the United States is almost 5 times than for white women. Similar “disparities” are found in almost every measurable statistic. Fatherless homes rank as a continuing problem, particularly among minority communities where male children growing up without fathers severs a child from male leadership outside of teenage gang memberships.

Is this to say that minorities have an immoral DNA? No. But it does show that those communities that are more totally dependent upon the government through systems of welfare have a deteriorating moral standard. That’s the nature of government dependency. Witness the Indian reservations wherein every single social malady skyrockets compared to the wider culture. Abortion, suicide, alcoholism, joblessness, fatherless homes and drug abuse are common problems associated with Indian reservations.

The point is simply this; in statistics that are measurable minority communities indicate that they have a different value system. Their moral standards have been corroded. And unless we can face these hard facts there is no hope for America.

Communist strategy has always been to exploit the natural fissures of society. Chiang Kai-shek, president of the Republic of China who passed in 1975, contended with communism for over thirty years. His first-hand observation was that the communist strategy is “always to analyze a country’s social structure before infiltrating it. They not only explore and exploit, but also create professional, regional, and religious contradictions. Then in the midst of the confusion, they win the masses over by disseminating propaganda about class struggle and establishing party cells among them.” Drive wedges into the natural divisions of society.

Vladimir Lenin stated in 1921 that it is “possible to defeat a more powerful enemy only by exerting the utmost effort, and by being thorough, careful, attentive and skillful in taking advantage of various kinds of fissures, even the smallest ones, on the part of the enemy …” That which naturally commended itself to communist infiltration was the racial divide in America.

Little wonder that the Roman Catholic bishops are now led by Marxist-oriented Pope Francis. It is also no coincidence that in seeking to establish “systemic racism” in America theconversation.com (cited above) leads with a quote from communist “Black Power” militant Stokely Carmichael to accentuate racism in America. Carmichael, originally from Trinidad, became interested in High School in studying the work of none other than Karl Marx from which he became an immediate militant demonstrating against the House Committee on Un-American Activities that had been exposing communists in America.

No need today for exposure of communist militants working “behind-the-scenes.” Saboteurs of our culture work in high places such as the former Obama Administration; the Vatican; and various professorships in academia. Therefore, we will increasingly hear how “systemic” our racism has been. It is past time to question their assumptions.