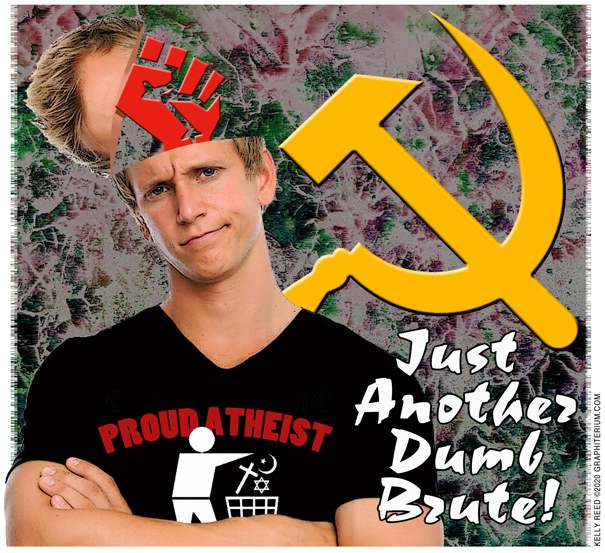 In spite of the many challenges in defining “religion” versus “irreligion”, or even “atheism” as opposed to “theism,” multiple studies indicate that Americans are becoming increasingly non-religious—even atheistic–in their orientation. Why is this? In part, it is doubtless due to the fact that socialism has become the state-sponsored creed not only taught in public schools and universities, but practiced by both major political parties. The philosophy of Socialism itself is rooted in atheistic assumptions, offering an alternative view of man, the family, society, sin, and the role of government.

First, socialism and communism are one and the same. Textbook authors of Elements of Socialism, John Spargo and George Louis Arner (1912) state it plainly. Communism is “equivalent” to Socialism (226). Karl Marx and Friedrich Engels, who wrote the Communist Manifesto, are lauded as the founders of modern-day socialism.

Second, how is the socialistic system atheistic? Engels argued that the “idea of God” resulted from fallacious reasoning by early man when he observed natural phenomena. “…the first gods arose through the personification of natural forces … out of the many more or less limited and mutually limiting gods there arose in the minds of men the idea of the one exclusive god of the monotheistic religion.” This is a concept still maintained by socialists.

Again, Engels theorizes that the Idea of God is a “reflection of the mind of men.” “All religion, however, is nothing but the fantastic reflection in men’s minds of those external forces which control their daily life, a reflection in which the terrestrial forces assume the form of supernatural forces. In the beginning of history, it was the forces of nature which were at first so reflected.”

Spargo and Arner suggest that, “Primitive man began to think and talk about himself and his environment. The world seemed full of mystery. How could he hunt in a dream when his friends swore that he had not moved? The echo and the shadow puzzled him. The mighty forces of nature awed him. There must be a power greater than himself, and since he could not think of forces as impersonal, he imputed personality to that power. There must be a spirit apart from the body or he could not hunt in is dreams. Thus were evolved the ideas of anthropomorphic gods, spirits, and ghosts.” “…a stage earlier than … even the lowest modern savages …”

What About These Socialistic Assertions?

First, if these things be true, then origin of religion not explained on basis of economic system. Therefore, the economic interpretation of history cannot account for religion which has been one of the most powerful forces in history. Engels himself even agreed to this. “It would surely be pedantic to try and find economic causes for all this primitive nonsense.”

Thus, according to one of the founders of modern-day socialism, it was not until after religion had arisen as a reflection of natural forces in men’s minds, that the social and evolutionary forces began to act and the “changing economic system” forged it differently. The philosophy of communism falls on its own sword here, for not everything can be explained on the basis of economics.

Second, there is no historical PROOF of any of these assertions suggesting that polytheism (belief in many gods) preceded monotheism (belief in one god). Assumption is a long way from proof. Actually, that is also the unfounded position of a growing number of so-called biblical scholars who begin their studies on this assumption. In point of fact, the opposite is true.

When men are not hypnotized by the hypothesis of evolution which demands that historical facts be arranged in such a way as to fit the hypothesis, they realize that the further back into any culture they go the fewer gods that culture has. William W.F. Petrie, in The Religion of Ancient Egypt, “What we actually find is the contrary of this, monotheism is the first state traceable in theology … Wherever we can trace back polytheism to its earliest stages we find that it results from combinations of monotheism …”

Professor Stephen Langdon studied Sumerian and Semitic religion. “Monotheism preceded polytheism and belief in good and evil spirits” (Semitic Mythology, 1931). Herbert Farmer, who was a Gifford Lecturer, stated that with but few exceptions the evidences show that “the most primitive levels of human life which we can reach by the soundest ethnological methods reveal a belief in one supreme deity or High God …” Many other unbiased scholars could be noted.

Third, deception is “built into” the socialistic system. How so? Setting aside the foolish assumption that early man was simply a dumb brute who could not discern his dreams from reality, Spargo & Arner argue at length that they are not “atheists.” But before the page is turned in the book they argue that God is a “construct of the human mind”; that religion itself is “man’s attempt to put himself into harmonious relation with, and to discover the meaning of the universe.”

Deceptively adept again, they rush to say that “The Marxian theory does not deny that men may have benefitted by seeking an interpretation of the universe, or that the quest for such an interpretation is compatible with rational conduct … Marx could not ignore such an important and universal phenomenon as religion” (p. 79-80).

It appears that these socialists believe that we are still “dumb brutes” who cannot reason. The question is not whether anyone believes that “religious belief” itself has played a part in men’s lives or in civilization—but is there any ultimate reality behind this belief in God?? To this question they answer “No.” This is atheism. When they confess that one’s beliefs has been a “force” in human history, that is a far cry from confessing whether or not there is any reality at the base of those beliefs.

As Americans plunge increasingly into a socialistic state, we are fed more and more lies by communistic masters. This is the very nature of socialism. This is one major reason why atheism and irreligion grow in America.