Bill Lockwood: The Left: A Coven of Neo-Canaanites 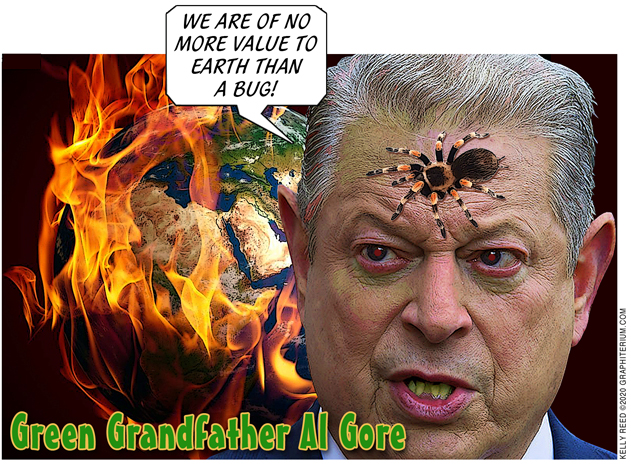 Nothing more clearly demonstrates the pagan religious orientation of the left than the recent effort by Democrats to begin turning our entire economy Greenward as their input into the recent COVID-19 stimulus package. According to Jeff Brady of NPR, “Clean energy and climate advocates say the huge stimulus bill Congress is negotiating should address not only the economy, but also climate change.” To Democrats, the Corona Virus pandemic is not about helping the American people—it is about fundamentally transforming the American economy.

For example, eight Democratic U.S. senators also called upon fellow lawmakers, according to NPR news, to tie financial help for airlines and cruise lines to new environmental requirements that would reduce their carbon footprints.” According to Michael Greenstone, who served as the Chief Economist for President Obama’s Council of Economic Advisers, “We can both stimulate the economy … and we can lay the foundation for a lower-carbon future.”

The Green Agenda, sponsored by all socialists and Democrats, is not about science. It is more nearly akin to a paganistic religious belief which jettisons real science in favor of doctrine. Like the Canaanite paganism of the Old Testament which involved itself in nature-worship and sacrificing in “sacred groves”, the New Green Deal advocates root themselves in a false ideology.

In what was called the “Eco-shot heard ‘round the world,” Berkeley historian Lynn White, before the American Association for the Advancement of Science over 30 years ago, frankly admitted that the source of our environmental “crisis” was the “victory of Christianity over paganism.” Plainly siding with ancient Canaanite paganism, he went on to say that “Christianity made it possible to exploit nature in a mood of detachment to the feelings of natural objects …Christianity bears a huge burden of guilt.” He went on to predict that “more science and more technology are not going to get us out of the present ecological crisis until we find a new religion.”

Note carefully the Environmental Activists were sounding apocalyptic alarms over 30 years ago. They haven’t changed. Noteworthy it is as well that it is all about religion.

The same thing is true according to Green Grandfather Al Gore. His infamous book Earth in the Balance made a frontal attack on the Genesis account of creation by re-writing the entire first few chapters of Moses’ account. The end result was a complete VALUE SHIFT from a human-centered world view to what the Clinton Administration called A Biocentric Worldview. This tells us that humans are seen as merely another species inhabiting a democratic “ecosystem.” No more value a human being than a bug.

Steven C. Rockefeller of Middlebury College, a theology professor and environmentalist, explains: “In a biocentric approach, the rights of nature are defended first and foremost on the grounds of the intrinsic value of animals, plants, rivers, mountains, and eco-systems rather than simply the basis for their utilitarian value or benefit to humans.”

In December of last year the United Nations sponsored a COP25 conference in Madrid, Spain. Attendee Alex Newman writes that the “cult-like nature of climatism was on full display.” An alternative conference occurred in Madrid which was totally ignored by the Main Stream Media. It was called “Climate Reality Conference” hosted by a coalition of environmental groups that reject climate alarmism, including The Heartland Institute, the CO2 Coalition, the Committee for a Constructive Tomorrow (CFACT), and the European Institute for Climate and Energy (EIKE).

The Climate Reality Conference featured numerous scientific experts which totally debunked the UN Global Alarmists. But what is particularly interesting is that a number of these world-class scientists likened the Green Agenda to so much religious propaganda.

William Happer, for instance, an international renowned Princeton physicist, put it plainly. “I hope sooner or later enough people recognize the phoniness of this bizarre environmental cult and bring it to an end.” MIT Meteorologist Richard Lindzen has frequently referred to the Global Warming crowd as a “cult” because they refuse to change their beliefs in response to evidence and proof. (See Alex Newman, “Dangerous Climate ‘Cult’ Ignores Science,” in The New American, 2-17-20).

Lindzen even stated it this way in a 2015 radio interview: “Think about it: You’ve led an unpleasant life, you haven’t led a virtuous life, but now you’re told, you get absolution if you watch your carbon footprint. It’s salvation!” Dr. Ivstan Marko, a chemistry professor at the Catholic University of Louvain and head of the European Chemical Society, told The New American magazine that “the climate cult had perverted Christianity to develop its dangerous theology. Instead of repenting of sins, climate cultists want you to believe that you must repent of your ‘carbon footprint.’”

“It’s a new religion going on,” Marko explained. Many other top scientists and political leaders are also calling the Green Agenda pushed by Democrats and soft-shelled Republicans a religion. Australian Prime Minister Tony Abbott as well as Eco-activist Stuart Scott have so likened it.

The entire Green debate illustrates the throes of a religious conflict occurring in America. Unless enough American Christians, oriented and educated sufficiently in the Holy Scriptures to combat the growing forms of ancient Canaanite religious beliefs, engage in the cultural wars, America has seen its better days.