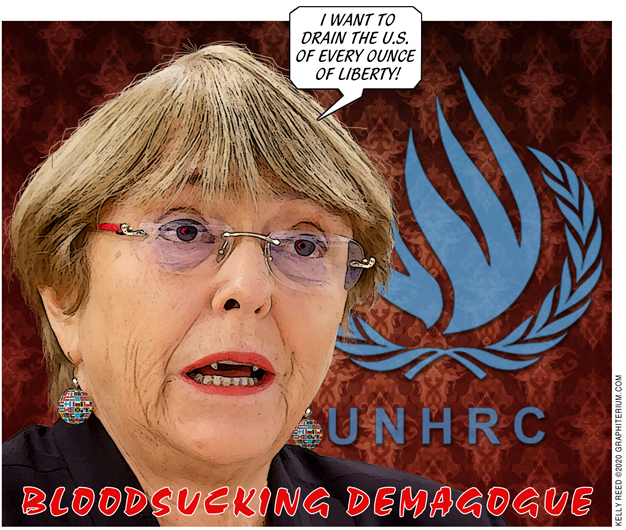 United Nations High Commissioner for Human Rights Michelle Bachelet blasted the Trump administration for its policies on immigration, the environment, and more. According to the far-left UN boss, a Chilean socialist with close ties to mass-murdering communist dictatorships, the U.S. government threatens everything from water and children to “human rights.” Many Third World regimes, by contrast, were praised by Bachelet for their alleged progress in complying with UN demands.

Among Bachelet’s most significant targets was the White House effort to secure the border and enforce U.S. immigration law. “Restrictive U.S. migration policies raise significant human rights concerns,” the UN “human rights” chief claimed during a recent session of the UN Human Rights Council in Geneva. “Reducing the number of people trying to enter the country should not be done in disregard of asylum and migrant protections. The situation of children in detention is of particular concern.”

Bachelet, who once defected to the mass-murdering East German dictatorship, was referring to Trump’s attempts to somewhat slow the enormous flow of illegal migrants into the United States — the nation that accepts more immigrants than any other on the planet, by far. How accepting more migrants than any country on Earth could be viewed as “restrictive” was not explained. The claim about children in detention was also left unexplained, with the UN human rights chief not making clear whether she believed having children in tow should constitute a proverbial “get out of jail free” card for any and all criminals.

Another focus of Bachelet’s ire was the Trump administration’s move toward deregulation, particularly on pseudo-environmental concerns. “The United States is also rolling back environmental protections, including for waterways and wetlands,” she complained, referring to Trump’s undoing of the Obama administration’s illegal scheme to federalize control over virtually every mud puddle in the United States. “Untreated pollutants may now be poured directly into millions of miles of streams and rivers, putting ecosystems, drinking water and human health at risk.”

Of course, in the real world, pouring untreated pollutants into a river or stream — and especially into drinking water — is a crime in every single state. Under the U.S. Constitution, which delegates a few limited powers to the central government, federal authorities actually have no regulatory authority over rivers, streams, or other environmental issues. Instead, as the 10th Amendment makes clear, those powers are reserved to the states or to the people who own the property that is affected.

As if to prove that the UN does indeed intend to control every aspect of human life, even the current regulation of fuel standards in the United States is now a target of the UN’s human rights machine. “Weaker fuel emission standards for vehicles, and decreased regulations on the oil and gas industries, could also harm human rights,” claimed Bachelet, as if American energy independence and slightly less onerous (but still unconstitutional) federal regulations on the energy sector were some sort of human rights crisis requiring UN intervention.

Meanwhile, Bachelet had nothing but praises for more than a few brutal regimes that literally remain in power through terror and mass murder. Not a word of condemnation, for instance, was handed out to the mass-murdering Communist Chinese regime, which has millions of dissidents in re-education camps and continues to perpetrate forced abortions, among other horrific violations of actual human rights. Bachelet said only that she welcomes the invitation to visit to “analyze in depth the human rights situation in China,” and that other governments should “do their utmost to combat discrimination” against Chinese people in light of the coronavirus. Seriously.

Regarding her native Chile, which has been under intense attack by communist forces led in part by Venezuelan and Cuban intelligence operatives, Bachelet demanded that authorities there “address the protests’ root causes: inequalities.” In other words, to placate the violent rioters and looters seeking the overthrow of individual liberty and economic freedom with Marxism, Chile must accept more Marxism. Seriously. Her office has apparently “provided recommendations” to Chilean authorities “for a sustainable roadmap guided by human rights norms.”

Of course, this is not the first time Bachelet has attacked the Trump administration and its policies. In fact, last summer, she lashed out against the U.S. government, claiming to be “appalled” and “deeply shocked” by the enforcement of federal immigration law. Taking the globalist extremism to new heights, she even claimed the U.S. government’s practice of detaining illegal immigrant self-proclaimed “families” for prosecution may be “prohibited by international law” for being “cruel” or “degrading.”

“In most of these cases, the migrants and refugees have embarked on perilous journeys with their children in search of protection and dignity and away from violence and hunger,” Bachelet said, displaying either ignorance or dishonesty regarding the true situation at the U.S. border. “When they finally believe they have arrived in safety, they may find themselves separated from their loved ones and locked in undignified conditions. This should never happen anywhere.”

In reality, as the U.S. government has thoroughly documented, human-smuggling rings are using children — some of whom are being trafficked for sex slavery — as a pretext to avoid detention after crossing the border illegally. “They are pairing children with unrelated adults, knowing adults who enter the United States with children won’t be detained,” explained U.S. Senate Judiciary Committee Chairman Chuck Grassley, citing a recent Department of Homeland Security Human Smuggling Cell report. Some of those children are kidnapped for the purpose, he continued, noting that once in the United States, they are often sold into sex or labor slavery. Many of the smugglers use fake documents to make it seem like the children are part of their “family.”

Before Bachelet’s comments, Deputy Human Rights High Commissioner Kate Gilmore lambasted the state of Alabama for trying to protect the lives of innocent children, calling the alleged attack on “women’s rights” a “crisis.” Another “human rights” spokesman for the UN also chimed in on the issue, saying the global body was “very concerned” about American states passing laws that “define all unborn children as persons.” In the UN’s view, murdering pre-born babies is a “human right,” while protecting the God-given right to life of those same children is a violation of human rights.

And before Bachelet even took over, her predecessor, a radicalized Islamic prince, was constantly attacking the United States and Trump. So extreme was Prince Zeid bin Ra’ad Al Hussein that he compared the American president’s tactics with those used by the Islamic State (ISIS). He also routinely attacked the God-given rights guaranteed in both the First and Second amendments to the U.S. Constitution, demanding “robust” gun control and draconian restrictions on free speech under the guise of “international human rights law.”

Of course, the UN has a very different view of “human rights” than Americans’ traditional understanding. America’s Founding Fathers declared that rights were endowed upon each individual by God, and that governments are created to protect those pre-existing, unalienable rights. The UN, by contrast, makes clear that governments and international instruments are the source of “rights” (really privileges) and that those pseudo-rights can be revoked or limited by government at will. In Article 29, the UN’s “Universal Declaration of Human Rights” states that those supposed “rights” may “in no case be exercised contrary to the purposes and principles of the United Nations.”

To understand the depth of the absurdity of UN’s self-proclaimed role as overseer of human rights, consider the fact that the mass-murdering communist dictatorship enslaving Venezuela was recently selected to sit on the UN Human Rights Council. The regimes enslaving Communist China, Cuba, Sudan, and other nations are also welcome. Or consider Bachelet’s own background as a notorious communist operative allied with mass murderer Fidel Castro and other Latin American barbarians. Considering that reality, it is no surprise that brutal dictators are celebrated by the fraudulent UN human rights bureaucracy, while liberty-minded nations are under relentless attack.

President Trump gave a devastating blow to this fraud by ordering the withdrawal of the U.S. government from the UN Human Rights Council in his first term. However, that is not enough. As American taxpayers fork over more than $10 billion each year to fund the UN, much of that money goes into demonizing the United States and trying to subvert its sovereignty. The only sustainable solution to this grotesque reality is a full withdrawal from the UN and all of its agencies. In his second term, Trump would do well to push for that goal with the passage of the American Sovereignty Restoration Act (H.R. 204). Nothing less will do.