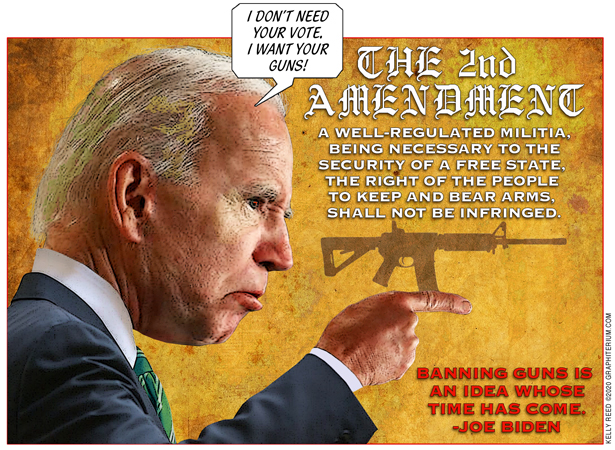 Presidential hopeful Joe Biden made a campaign stop this week at an auto factory in Michigan. When asked about “eroding” the 2nd Amendment right to keep and bear arms, Biden exploded and told the worker he was “full of ___.” The former VP was at the same time “shushing” his handlers who saw he was going off into the danger zone and were trying to stop him.

Elitist Biden then referred to the AR-15 as an “AR-14” and claims he supports the 2nd Amendment. Then he said the “AR-14” is a “machine gun” and declared it illegal in the United States and questioned why anyone wanted 100 rounds of ammunition.

There are so many things wrong with Biden’s position, it is difficult to summarize within a short piece.

First, the 2nd Amendment states to the federal government: “Shall not infringe.” The entire Bill of Rights is a ban on the federal government from touching the rights which Americans consider sacred. Really, the Bill of Rights is really not a “declaration of rights” at all. Instead, it is a specific list of prohibitions against the Federal Government. The Founders believed, and rightly so, that federal intrusions into the affairs of the people were the most ominous threats to the happiness and welfare of society. Therefore, regardless of the “wisdom” that elitist Biden thinks he may have if elected President, the Founders already barred him from touching the right of the people to keep and bear arms—whatever those arms may be.

Secondly, the 2nd Amendment includes every American, not simply a “national guard.” Modern liberals, who apparently know nothing of the real history of America and the Constitution, all claim that the 2nd Amendment applies only to the organized “National Guard.” Anyone who cares to actually read what the Framers of the Constitution themselves said on the topic will recognize at once this mistake.

Richard Henry Lee stated that “To preserve liberty, it is essential that the whole body of people always possess arms, and be taught alike, especially when young, how to use them.” The men who crafted the Bill of Rights spoke with one accord regarding what they meant by “militia.” Samuel Adams observed, “The said Constitution shall never be construed to authorize Congress to … prevent the people of the United States who are peaceable citizens from keeping their own arms.” Another, Patrick Henry, was quite adamant. “The great object is that every man be armed … Everyone who is able may have a gun.”

It is sheer nonsense to suppose that the 2nd Amendment authorized only an organized “national guard.’ A United States Senate Subcommittee in 1982, after thoroughly examining the founders’ intent on the Second Amendment, concluded: “The framers of the Bill of Rights consistently use the words ‘right of the people’ to reflect individual rights… the ‘militia’ itself referred to a concept of universally armed people, not to any specifically organized unit.”

Third, the 2nd Amendment is tantamount to valuation of life and liberty. Jeffrey Snyder is an attorney in private practice in Washington, D.C. In a publication entitled The Public Interest, under “Nation of Cowards,” Snyder makes the following observations regarding the right to keep and bear arms enjoyed by Americans.

“Gun control is a moral crusade against a benighted, barbaric citizenry. This is demonstrated not only by the ineffectualness of gun control in preventing crime, and by the fact that it focuses on restricting behavior of the law-abiding rather than apprehending and punishing the guilty, but also by the execration that gun control proponents heap on gun owners and their evil instrumentality, the NRA.”

“Gun owners are routinely portrayed as uneducated, paranoid rednecks fascinated by and prone to violence, i.e. exactly the type of person who opposes the liberal agenda and whose moral and social ‘re-education’ is the object of liberal social policies. Typical of such bigotry is New York Gov. Mario Cuomo’s famous characterization of gun owners as ‘hunters who drink beer, don’t vote, and lie to their wives about where they were all weekend.”

Snyder points out too that the late Sen. Kennedy characterized gun owners as the “pusher’s best friend.” And who can forget Barak Obama’s picture of the ignorant masses who cling to their “bibles and their guns.”

In the end, Snyder observes that gun controllers routinely are those who devalue life, and we might add, liberty. The notion that defending oneself with lethal force is not somehow “civilized” “arises from the view that violence is always wrong, or the view that each human being is of such intrinsic worth that it is wrong to kill anyone under any circumstances. The necessary implication of these propositions, however, is that life is not worth defending.”

The above explains why the left not only do not wish for Americans to defend themselves against tyrannical governments, but are happily for the murder of the unborn. Life has little value to them. “One who believes it wrong to arm himself against criminal violence shows contempt of God’s gift of life …”

The same can be said regarding our ability to defend against tyranny and God’s gift of freedom. Biden does not value life nor liberty.