Bill Lockwood: Ocasio-Cortez Should Spend Time Reading the Bible Before She Criticizes It 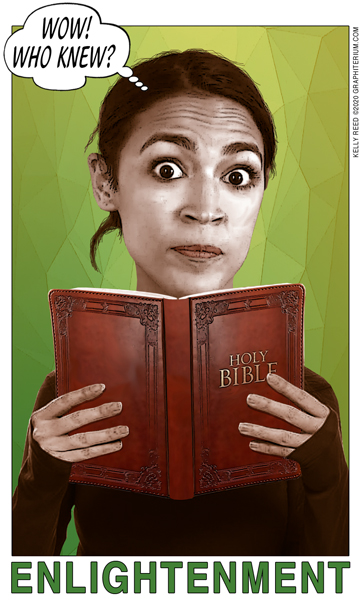 Nothing more clearly illustrates that the ideology of Socialism is in reality a religious doctrine dressed in political clothes than the amount of vigor socialists exert to criticize the Bible. Our entire culture war is a religious one. From Barack Obama to Alexandra Ocasio-Cortez, socialists have felt the need to attack God’s Word. Ocasio-Cortez, for example, once again this week unleashed on biblical values. Why? Because the Bible demonstrates that totalitarian systems are wicked.

This is all very peculiar to many mistaken Christians who naively suppose that Christians have no business logging in on “political issues.” Their idea seems to be; allow atheistic socialism and communism and fascism to trample God’s Word with hobnail boots—just keep your mouth shut. Give no answer.  This evidently comes about because they cannot see divine principles behind the political machinery in America. For example,

Take the issue of life. God’s Word teaches (Psalm 139:13-16) that God gives life to an infant within the mother’s womb. But the protection of that life, the very purpose of law, Ocasio-Cortez likened to “controlling women’s sexuality.” When the state of Alabama outlawed nearly all abortion in the state in 2017, she could hardly contain herself and charged that the “religious right” only invoked religion to “punish women.”

This is the classic dodge by a hedonistic society that has thrown out God’s Word and is therefore left with a big empty hole of nothingness by which to determine what is and what is NOT life. Godless women may be sexually active—but there are consequences to that behavior, including the formulation of life. For a society to allow the murder of that unborn life so that women and men may feel no repercussions for their immorality is itself a gross violation of natural law, to say nothing of biblical values.

What Shall We Say To These Things?

First, for one to claim biblical backing for a concept of “rights” does not mean that this is an accurate portrayal of the Bible. Some in history may have tried to “justify” racial superiority with scripture, but God’s Word cannot be blamed for every misuse which the invention of man may come up with. Ocasio-Cortez should understand this. The Bible declares that life is sacred because it is created by God (Gen. 1:27), even in the mother’s womb (Psalm 139). Yet, that does not stop liberals from demanding the murder of the unborn as a “right.”

Second, the legal standards historically established by our society have been biblically-based, including the outlawing of homosexuality. The New Testament is emphatically clear that homosexuality is a behavior-driven malpractice that results from a free choice that people make. Romans chapter one even points out that this grievous sin occurs in society only after that society has repudiated God.

If the absolute standard of God’s Word be no longer valid, then what would be wrong with being a “white supremacist” or a “black supremacist?” Can Ocasio-Cortez tell us? What standard condemns these ideologies? Regarding slavery, what would be wrong with slavery to begin with, if there is not an absolute standard by which to measure? Why would “bigotry” be an ugly thing, Ocasio-Cortez? What criminality or injustice would there be in being prejudiced and intolerant of others?

The natural parameters of Republican principles of government come from the Bible—including public morality. All the residents of a community are subject to these standards approved of by the majority. If not, government itself would be impossible. Ocasio-Cortez may rail against the “theology” of what she calls “religious fundamentalists,” but the only thing she has to offer in its place is a “theology” of atheistic hedonism which turns society into cesspool of wickedness and violence in which “every man does that which is right in his own eyes.”