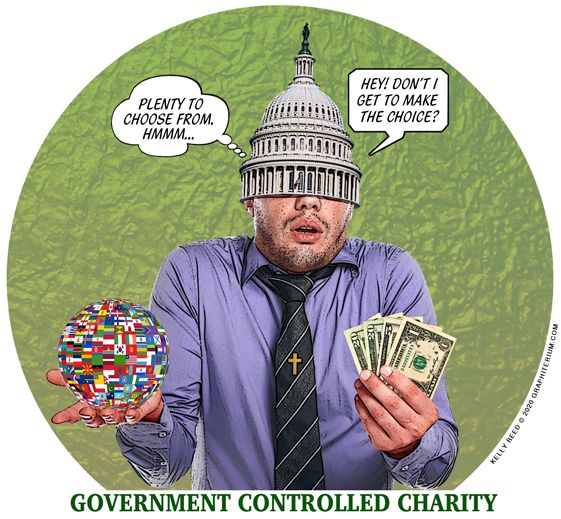 I worship with a church that supports a missionary family in Cape Town, South Africa. Several churches of Christ in the United States have pooled their resources to finance the work there, which includes feeding the poor in a soup kitchen, providing shelter to those who live in cardboard boxes, and preaching the gospel of Jesus Christ to them. The giving of our finances in the church is, of course, strictly voluntary.

What do Americans think of my preaching that we all need to assist the poor in foreign countries and “preach good tidings” to them? Obviously, they recognize that is my right. Most would probably agree that such works need be funded by American dollars.

But it is also their right to reject that work. They may prefer works closer to home than South Africa. What then if, in reaction to their rejection, I would then insist that all MUST give to this specific work or be counted as unchristian and hard-hearted? I could add some biblical warnings about assisting others in need and threatening the judgment of God if they did not.

Some may answer—“look here, we support other works that are just as charitable. Why do you insist that we participate in the specific work you and your church are engaged in?” That itself would be a charitable answer seeing the approach I had taken. Others would probably ignore me. Still others would rightly question my ability to think clearly.

Let’s take it one step further. Suppose I have influence through powerful lobbyists in the legislature of the State of Texas. Because of my frustration with my fellows for their “lack of compassion” to those in South Africa, I work through these lobbying influences until legislation is passed in the State that mandates portions of public tax dollars to the South Africa work. Now everyone WILL support the work that I have been preaching!

First, no one could classify the money that comes because of legal action as “charitable giving.” Legislative action does not spawn charity. The very reason “legislation” is passed is to compel compliance. Money may flow and people may benefit—but charity it is not. It is redistribution by force. The socialists dream. Not only so, but no one in their right mind would consider forcible redistribution a part of the “charitable giving” of the Congressmen who so legislated. They will not write this off on their tax returns.

Second, the legislative action has a deleterious effect on real avenues of giving. As long as the government compels from me more money to apply to one specific work that bureaucrats have selected, my ability to give to other needs that I personally would rather support has depleted. And how many charitable works are there that the government demands I sponsor? As many as there are legislators. That being the case, how much of my own money do I have remaining with which to support works that I select? Other works are just as fine as supporting missionary work in South Africa, but they will have to do with less.

Third, are those who oppose the legislation that FORCES tax money to flow to South Africa “unchristian?” Are they “uncharitable?” Shall I go about bellowing how “unchristian” my fellows are because they oppose that specific piece of legislation? Since it is not charity to begin with, it hardly is logical to say that those who oppose it are stingy, greedy, unchristian Scrooges. Common sense and even-handed reasoning recognizes that many people support many different causes and if you do not support the cause which I prefer it does not make you unchristian.

Now look at the southern border. Border states have been crying for as long as I have been alive for the federal government to do its job and curtail illegal crossings. But no politician has been brave enough—or desirous enough– to get that job done–until President Trump. President Obama even single-handedly, without constitutional authorization, negated some of our own laws in order to allow more foreigners to pour into America.

Now we are told we need to assist these foreigners from poor countries because that is our Christian duty! Translation: this is the charitable work that the liberal intelligentsia has selected for you to participate in, and money will be forced from your pocketbook to sponsor it. Not only so, but these poverty-stricken people that beg to come in will be housed in your neighborhoods at your expense. If you have misgivings about it, you are unchristian. Christian duty demands open borders, so the story goes.

Here are some questions. If it is Christianity to force Americans to pull down our border fences, is it not also Christian duty to allow the poor to camp in your front yard? Does ‘Love your Neighbor’ mean pull down the fence? Why are all of those who preach “open borders” shored up behind walled communities and housing area, normally in white middle-class neighborhoods? Is it not hypocritical to demand your neighbors to care for the poor, while we do very little? Why have front doors on our homes?

Shall American families be required to sponsor various families from south of the border? If so, should these families be forced to adopt-a-family by bringing them inside your homes? If not, why not?

If one selects some other charity work instead of the “open borders” program, is that less charitable? Is it necessary to follow the government’s agenda in order to be charitable? What if, as a Christian, I am for closing the border completely and funneling my resources to care for the poor among us?

Would it not be better just to GO to the country of origin of many of these people and do voluntary charity work there?

If I do NOT give charitably, should the government take control of my finances to make me be more charitable? Would that be charity at all?