Bill Lockwood: “The Glory of God” Emphasized by President Trump in State of Union 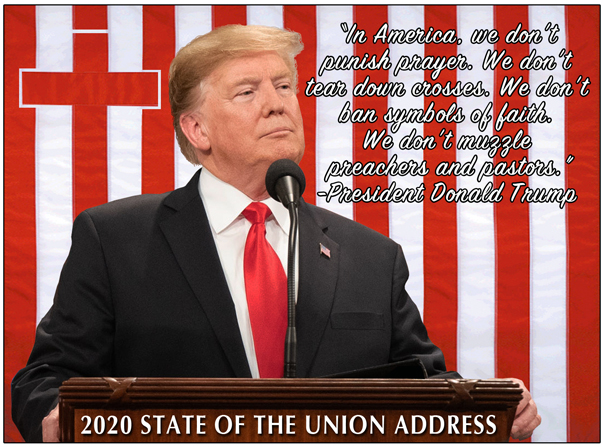 House speaker Nancy Pelosi theatrically tore up the copy of Trump’s speech as soon as he concluded on Tuesday night. Why? Perhaps it is in the fact that our president emphasized that which should cause Christians everywhere to celebrate.
Religious Freedom, The Glory of God, and the Celebration of the Life of the Unborn—these were major themes of the State of the Union on Tuesday night.
The News Division of Pulpitandpen.org wrote, “In what was quite possibly the most Christian-affirming State of the Union in history, President Donald Trump defended Freedom of Religion, denounced anti-religion ‘cancel culture’ and lauded the glory of God.”
“My administration is also defending religious liberty, and that includes the constitutional right to pray in the public schools.” He added, “In America, we don’t punish prayer. We don’t tear down crosses. We don’t ban symbols of faith. We don’t muzzle preachers and pastors.”
White House chief of staff Mick Mulvaney declared at the National Catholic Prayer Breakfast on Tuesday morning that “faith drives the Trump administration’s policy proposals, arguing that ‘the principles of our faith are being manifest” under the president’s watch (RNS News).
Apparently, however, belonging to the Democrat Party “trumps” religious considerations and moral principles, for Democrat Russell Moore, who chairs The Ethics and Religious Liberty Commission (ERLC) of the Southern Baptist Convention, has offered “no accolades to Trump for his remarks about religious liberty.” Instead, pulpitandpen.org notes, “the ERLC research fellows began a new round of attacks against Trump in social media.”
This freedom is why Nancy Pelosi demonstratively tore up the speech as soon as the final word was spoken. Cut liberty — especially religious liberty.