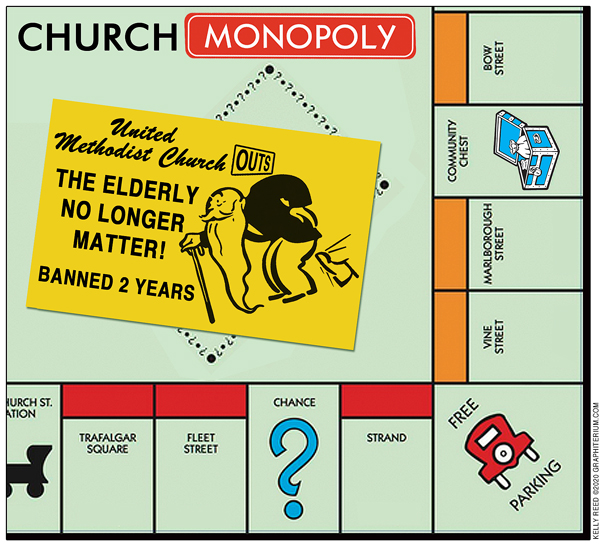 This headline appeared last week in The Washington Post. The Cottage Grove United Methodist Church on the outskirts of Minneapolis-St. Paul, is a small dwindling church of about 30 members that has put in place a new “strategic plan” for church growth among “younger people” such as Millennials. A major part of that plan, which one 70-year-old member calls “age discrimination,” is to ask the elderly to leave and worship elsewhere.

After this news went national, Dan Wetterstrom, the “head pastor” of the church, claimed that these allegations of “age discrimination unfairly represented the strategy for a church that has been on the decline for two decades.”

Instead, he explained, the church’s services are “being cancelled” and will re-open after a major refurbishing of the building, its staff, and its worship services, including replacing the traditional hymnals. A church memo also recommended that “current members stay away for two years, then consult with the pastor about reapplying.” That is according to the local news outlet, the Pioneer Press.

“The plan is to shut down the church in June and reopen later this year with a new pastor, new programming and building updates ‘aimed at engaging more members of a growing community.’” “While older members will not be physically barred from attending, the expectation is that they will not.” Wetterstrom added, “We are asking them to let this happen. For this to be truly new, we can’t have the core group of 30 people.”

So, it is technically not “disinviting” the elderly. They are only “physically shutting the doors” and the current elderly membership must “re-apply” to get back in after a recommended two-year absence.

Bruce Ough, the Methodist “bishop” of the Dakotas-Minnesota region and provides oversight to congregations, defended the strategy as part of a “relaunch effort” that has been “successful in other parts of the region.”

It is difficult to know where to begin to comment on such items as this. It does give a frightening insight into the mindset of many Americans which sees the elderly as a hindrance instead of an opportunity to serve. No wonder many churches have completely capitulated to a godless culture that demands the ceasing of preaching against sin.