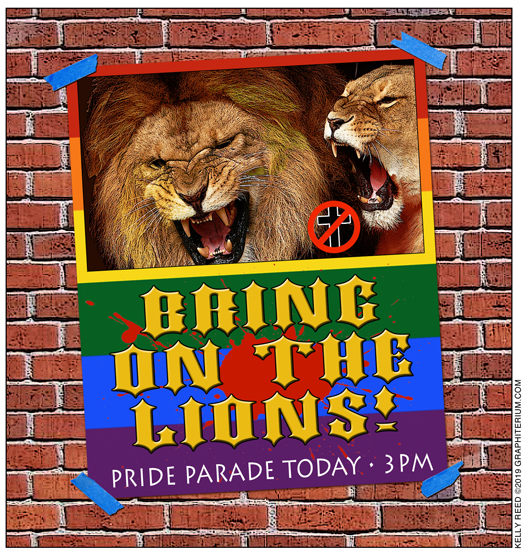 Several years ago a relative of mine was in a major northeastern city for a short visit and it so happened that a “Gay Pride” parade was occurring. Shocking as it seems, some of the marchers were carrying signs that read: “Bring on the Lions!” That, of course, referred to the extermination of Christians after the order of the ancient bloody Roman Empire and presented a completely different picture of the Homosexual Goal for America than the MSM would like for you to see.

The entire political & cultural battle today may be boiled down to a War on God by the political left, which is being driven by the Homosexual Agenda. Nothing can be clearer than this. Even Islam joins with homosexuals—for now–in this same goal of eradication of Christianity. Read the text of the Democratic Party’s so-called Equality Act (H.R. 5) and be in the dark no more. It completely eradicates The Religious Freedom Restoration Act (RFRA), originally passed in 1993, let alone respect the First Amendment which promised that the federal government is FORBIDDEN to touch religious speech and freedom.

“The Religious Freedom Restoration Act of 1993 (42 U.S.C. 2000bb et. seq.) shall not provide a claim concerning, or a defense to a claim under, a covered title, or provide a basis for challenging the application of enforcement of a covered title.”

The RFRA began as a reaction following a 1990 Supreme Court decision (Employment Division v. Smith) which concerned Christians that religious liberty might be threatened. This resulted in a huge national movement of Christians to protect their God-given rights.

How does this link to the Homosexual Agenda? GrasstopsUSA re-published a portion of homosexual activist Michael Swift’s Manifesto from 1987. For a real stomach-turner, read the entire text on Fordham University’s website entitled, “Michael Swift, ‘Gay Revolutionary,’” reprinted from the Congressional Record itself.

We shall sodomize your sons, emblems of your feeble masculinity … Your sons shall become our minions and do our bidding … All laws banning homosexual activity will be revoked. Instead, legislation shall be passed which engenders love between men… There will be no compromises … All churches who condemn us will be closed … All males who insist on remaining stupidly heterosexual will be tried in homosexual courts of justice … Tremble, hetero swine, when we appear before you without our masks.

As Grassroots correctly stated, “Disguised as a measure to extend civil rights protections” to homosexuals and “transgendered individuals,” H.R. 5 actually “forces every man, women and child in the United States to not simply accept anti-biblical behaviors but to actively affirm them under penalty of law.”

Brad Polumbo, a homosexual Opinion Writer for USA Today and who wishes to “outlaw” “conversion therapy”, while claiming to be “libertarian,” headlines the following, “Gay Conservative: Equality Act would crush religious freedom. Trump is right to oppose it.”

Polumbo calls the “Equality Act,” “the landmark LGBT rights bill.” “From my vantage point as a gay conservative, I can see that the Equality Act goes too far for any level-headed gay rights advocate to support, and its blatant disregard for the basic right to religious freedom is appalling.”

The bill purports to protect LGBT Americans like me by prohibiting discrimination ‘based on sex, sexual orientation and gender identity in areas including public accommodations and facilities, education, federal funding, employment, housing, credit and the jury system.’ On the surface, this sounds unobjectionable—after all, no one deserves to face discrimination. Yet the bill defined ‘public accommodations’ so loosely and called for regulations so sweeping that it would crush religious freedom and radically reshape American society.

Polumbo warns that “The Equality Act could potentially see houses of worship deemed ‘public accommodations’ and subjected to anti-discrimination law. It would also declare any hospital or establishment providing medical services a ‘public accommodation,’ which would include religious organization and hospitals.”

Homosexual activist Steven Warren issued in 1987 a “Warning to homophobes.” In it he stated that homosexuality will be spoken of in your churches and synagogues as an “honorable estate” and “you can either let us marry people of the same sex, or better yet abolish marriage altogether.”

Throwing down the gauntlet to Christianity, he warned, “You will be expected to offer ceremonies that bless our sexual arrangements” and you will “instruct your people in homosexual as well as heterosexual behavior, and you will go out of your way to make certain that homosexual youths are allowed to date, attend religious functions together, openly display affection, and enjoy each others’ sexuality without embarrassment or guilt.”

If the older people object “you will deal with them sternly, making certain they renounce their ugly and ignorant homophobia or suffer public humiliation.” “Finally, we will in all likelihood, want to expunge a number of passages from your Scriptures and rewrite others …”

The final warning: “If all these things do not come to pass quickly, we will subject Orthodox Jews and Christians to the most sustained hatred and vilification in recent memory.”

Bring on the Lions.