Bill Lockwood: The American War on God & the First Amendment 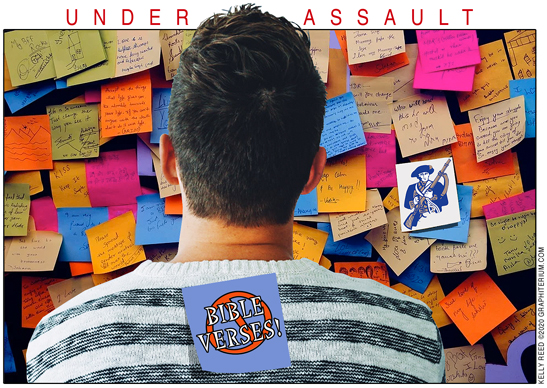 American leaders have been hostile to God for over a century. Our cultural landscape has been re-shaped because of it. One of the most recent battles involves a High School in West Virginia.

The Rutherford Institute, led by John Whitehead, has a press release this week which once again shows the depth and nature of this war against Christianity. A high school student-led club called Youth Alive in Weston, West Virginia has practiced posting sticky notes with inspirational messages to encourage each other on a bulletin board in one of the hallways. It is student-led, featuring Young Republicans, Young Democrats, Youth Alive, and other groups–all which use the board.

The trouble apparently came when students began posting Bible verses of a self-help nature on the board. That was too much for the Lewis County High School administration, which promptly shut down the bulletin board completely. No Bible allowed. It probably would have still been in use had students posted a quote from Karl Marx such as “Workers of the World, Unite!”

The nature of the America’s struggle is here seen. It is The Bible that is under assault. With concerns over a non-constitutional measure called “Separation of church and state,” the Lewis County High School actually has capitulated to the onslaught of secular forces in America.

John Whitehead, a constitutional attorney, comments, “What a missed opportunity to support young people in their efforts to find positive, constructive methods of engaging with fellow students who might be struggling with feelings of depression, unhappiness and stress.”

Whitehead has been fighting this secular onslaught for forty years. “Not only is the removal of these inspirational notes a clear act of censorship that violates the First Amendment,” he said, “but it also sends the disheartening message to young people that school officials care more about doing what is politically correct than doing what is right.”

The Rutherford Institute is leading the legal fight for liberty in Lewis County, demanding the Youth Alive be allowed to re-post inspirational notes, including selections from Bible verses. Students need faith, encouragement and forgiveness in a world where people are broken-hearted, alone, insecure, stressed and confused. The Lewis County High School has actually violated the First Amendment and the Equal Access Act, a federal statute that guarantees religious and political clubs equal rights in public schools.

Two things here. One, the First Amendment is designed to forbid government from endorsing or supporting one particular church in the Christian world—nothing to do with removing Bible, Christianity, or godly principles from the public square. The forbidding of “establishment of religion” in the First Amendment simply refers to a “National Denomination” in the sense that America was to have a State Church supported by public taxes.

Note that the word “religion” is interchangeable with “denomination.” The founders were unanimous that the First Amendment merely forbade the establishment of a National Church. It had nothing to do with excluding God from the public square, least of all from schools. But what do secularists care about original intent?

Second, Dr. Samuel Mitcham, Jr., a military historian who has authored the recent It Wasn’t About Slavery: Exposing the Great Lie of the Civil War, stated in a recent interview on the American Liberty with Bill Lockwood radio show, that which we term “political correctness” is actually nothing less than Cultural Marxism. Everything has a place in the market-place of ideas—except the Bible.

Dr. Mitcham knows whereof he speaks. A college professor for over twenty years and author of more than 40 books on military history and the culture, Dr. Mitcham is right on target. Who would have guessed that none the less than Karl Marx would have been the dominant force in American political “correctness” within two hundred-fifty years of his Manifesto?