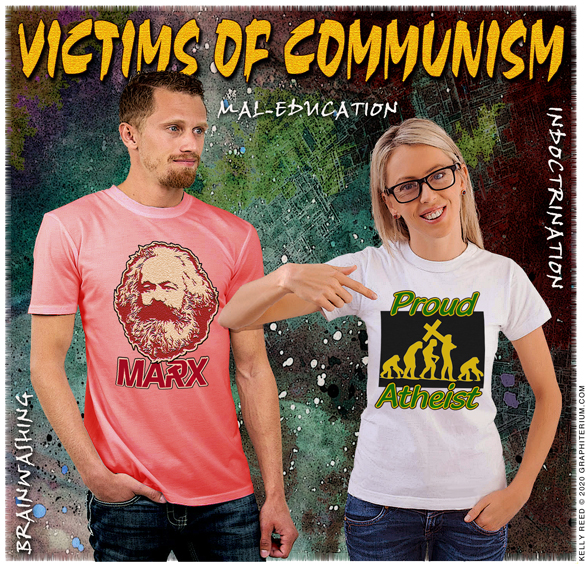 A recent article in Market Watch by Shawn Langlois highlights a frightening prospect for America’s future. A new survey released by the non-profit Victims of Communism in Washington, D.C., 36% of millennials say they approve of communism, which is up about 10 percentage points from a year ago. Added to that is that 70% of millennials say they are “likely to vote” for a socialist candidate. Further, 22% of the same age bracket say that “private property ought to be abolished.”

This is not merely about lack of education of the youth. It is about mal-education, specifically at the collegiate level, although High Schools and Junior Highs are preparing children for that brainwashing via the doctrine of Climate Change. As these young people begin assuming leadership roles in America, our society will be completely turned up-side down. This is the case precisely because socialism is not simply about economics, but is about a “cultural change.”

Charles Scaliger, in a recent article in The New American print magazine, explains. Socialism is “first and foremost… a social movement, not an economic one. The primary objective of socialism is to destroy the social and moral fabric of society, using economic control as a major tool.”

But this cultural change traces to a different view of human nature than that upon which western civilization has been built. This foundation is a biblical concept of man, nature, and society. Man was created in the image of God (Gen. 1:27) and life itself is a gift from God. Ideas of limited government, liberty and private property are by-products of this religious heritage.

For this reason, our Founders with one accord referred to this as a Christian nation. On the other hand, all forms of socialism reject this concept of human nature, and consequently, our free society forged by the Bible.

Socialism and communism are two peas in the same pod, as seen from the Victims of Communism poll. Communism is merely a form of socialism. Both seek to overturn society, one by the bullet and the other by the ballot. Both trace their heritage to the philosophy of Karl Marx and his atheistic view of human nature and both therefore fervently reject the concept of human nature as presented by Moses in Genesis. Marx’s view in brief is that man’s nature is created solely by the economic system and one’s relationship to it. Society is therefore changed by altering the economic system.

That both socialism and communism are the same philosophy, consider also the fact that the Labour Party, the Socialist Party in Britain, put out in 1948 a Centennial Edition of The Manifesto of the Communist Party with an introduction written by a fellow socialist, Harold Laski. In 1961 the Socialist Party in America listed The Manifesto on its reading list as a socialist classic. Norman Thomas, who was known in yesteryear America as “Mr. Socialist,” said that the Manifesto was the first formulation of socialism.

Fascism is also another form of socialism. Professor Thomas DiLorenzo, in his excellent treatment of the entire topic in The Problem with Socialism, points out, for example, that Benito Mussolini was always a socialist. Fascism is merely national socialism as opposed to international socialism. National socialism, or fascism, is content to allow private business to survive as long as they are directed by government subsidies and policies—which is exactly where America is today.

Without suggesting that socialists follow Marx in everything, it is the case that all these views—socialism, communism, fascism– explicitly or implicitly accept the view of human nature that Karl Marx set forward. College students today are feasting at Marx’s table which eventually influences them adopt his world-view and specifically his view of human nature. This is why the differences today between the Left and Right are irreconcilable. These views begin at a different place regarding God, nature, and humanity. In reality, socialism itself is atheistic.

See how the atheistic view of human nature lies at the bottom. Mussolini wrote that “The Fascist conception of life stresses the importance of the State and accepts the individual only in so far as his interests coincide with the State….It is opposed to classic liberalism … [which] denied the State in the name of the individual.” (Quoted by DiLorenzo, 68).

The fact is is that Mussolini wanted the individual is to be subsumed into the State. What is the difference between this and the current proposals of the Democratic Party? State redistribution of wealth, income taxes, reparations, minimum wages, universal socialized medicine, guaranteed living income, and more make up the panoply of old socialist ideas pushed by the Democrats. All for the state, very little individual liberty. This is why the Democrats in America are always, and have always been, on a collision course with biblical values.

Vergilius Ferm, in his Encyclopedia of Religion, explains the depth of the conflict between Christianity and socialism:

“American socialism is heir to the tradition of materialism and atheism. It relies on the growth of automatic perfection, not indeed by virtue of the given natural faculties of man, but as the product of causally inevitable economic changes. The result is parallel to that of the liberal utopia, a self-contained world of man, individualistic here, collectivist there, and redeemed from evil, once and for all, by the economic process, much as this requires men conscious of their opportunity. This is an overtly anti-Christian doctrine.”

The social and moral fabric of American society must be remade, per the socialists, aka Democrats. This is also why the war in America occurring now is not simply about politics, left or right. It is all about biblical values and whether we will honor them.