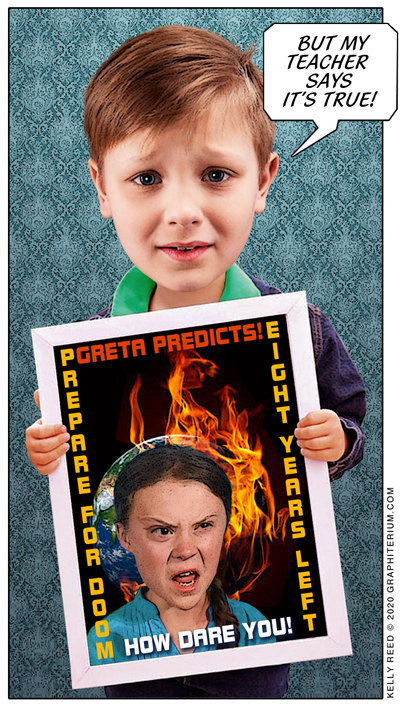 MADRID — Inmates at government schools in Canada and beyond are being absolutely terrorized with “climate” alarmism, to the point that some of them were convinced that they will die in just 8 years unless the United Nations is given more power and money. Scientists have compared the tactics and hysteria to those used by cults and dictators.

The poor children were absolutely terrified. “We are gonna die! I don’t want to die!” screamed one little child during a propaganda session on “climate” forced on 2nd and 3rd graders at a public school in Toronto. A concerned parent who reached out to FreedomProject Media about the scandal, Lejla Blazevik, said her 8-year-old daughter told her the rest of the class had joined in, too.

Her own daughter, Joylaea Blazevic, got home from school after the indoctrination and recounted what happened at school that day: “She’s like: ‘Mommy, they said that we’re going to die in eight years.’” Even believers in the man-made global-warming hypothesis, including child psychologists, told media outlets reporting on the traumatic incident that it was “inappropriate.”

Among other things, the video featured Swedish girl Greta Thunberg scolding adults. The video included the now-infamous remarks: “People are suffering. People are dying. Entire ecosystems are collapsing. We are in the beginning of a mass extinction and all you can talk about is money and fairytales of eternal economic growth. How dare you!” After that, a clock counting down 8 years was shown to the students, causing panic.

Ms. Blazevic vowed not to give up in this fight. “Again, my concern is for the 7- and 8-year-old children in this grade 2nd and 3rd class who may still believe that they’re going to die,” the mother told The Newman Report in an email before the story became an international scandal following an article in Canada’s National Post. “Also, the parents of these children need to be notified.”

School officials have issued contradictory responses to the scandal, ranging from denying and downplaying it, to apologizing and claiming it was for the children’s own good. On several occasions, according to emails obtained by The Newman Report, administrators claimed that it was just one student who yelled about dying. School officials also later claimed that the student in question had a habit of shouting that.

But not according to Ms. Blazevik, who wondered which of the contradictory statements by school officials were lies. “It was most of the children in the class who exclaimed ‘I don’t wanna die’ and not only one child,” she told The Newman Report. Indeed, the concerned mother spoke to a 7-year-old girl from her daughter’s class in front of that girl’s father, “and she said that she was happy that she’s going to die soon because that meant that she didn’t need to get married,” Blazevic recounted.

School officials also later claimed that students were “debriefed” and that the “nerves” of the children were “likely calmed” by re-assurances that they would not die from supposed man-made warming in 8 years. “My daughter is the best student in class, she attends school regularly and she is sure that the class was never corrected, not even on that day, during the presentation,” Blazevic said, expressing concerns that government-school employees were misleading parents and students.

School officials claimed the purpose of the propaganda video was actually to help the children to “resolve” the supposed problem of man-made climate doom. “Once again, we regret the impact the video and clock had on Joylea,” Prinipal Michael George told Blazevic in an e-mail obtained by FreedomProject Media. “Our intent is always to create critical thinkers & problem solvers with a perspective of contributing to the well-being of our global community.”

Meanwhile, in Germany, outraged citizens protested after the state-broadcaster showed video footage of young school children being taught to sing that their grandmothers are “pigs” for eating meat and driving gasoline-powered cars. “Every day my grandma fries herself a pork chop,” the seemingly happy children sing. “She does it because discount meat costs nearly nothing, my grandma is an old environmental pig!”

All over the United Nations COP25 “climate” summit in Madrid in December, meanwhile, brainwashed children ran around screaming about the alleged need to dismantle free markets, patriarchy, the economy, Western civilization, and more. They also demanded that the UN loot Western taxpayers, ban airplanes and “fossil fuels,” restrict meat consumption, and much more.

Leading scientists in Madrid, such as Princeton physicist and Trump advisor Dr. William Happer, warned that this was the behavior of a dangerous “cult.” “I hope sooner or later enough people recognize the phoniness of this bizarre environmental cult and bring it to an end,” said Happer, who added that the UN and governments were “wasting our time talking about a non-existent climate emergency.”

Clearly, though, the children are being prepared for something big. Former Vice President and discredited “climate” guru Al Gore, for instance, was quoted in the UN’s propaganda book “Rescue Mission Planet Earth: A Children’s Edition of Agenda 21” calling for a “worldwide monitoring system staffed by children … designed to rescue the global environment.”

The mass-murdering totalitarian regimes of the 20th century such as those of National Socialist (Nazi) Adolf Hitler and Chinese Communist butcher Mao Tse-Tung relied on remarkably similar tactics to those now being deployed against Western children. With a combination of fear-mongering, indoctrination, and propaganda, these savage regimes drove a wedge between parents and their children, turning the children against their families to facilitate the destruction of liberty.

The results were deadly and catastrophic. Indeed, those tyrants collectively slaughtered hundreds of millions of people and enslaved billions more. It is time for parents to step in and put a stop to it — now — before it gets too far out of hand.