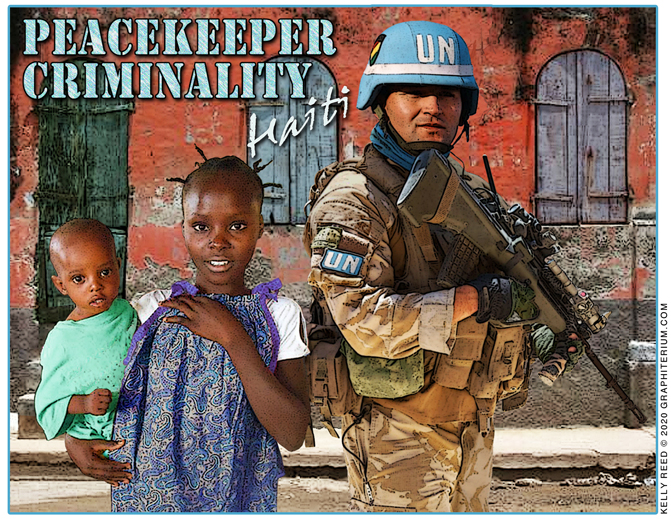 A new report on the crimes of UN “peacekeepers” in Haiti reveals how “girls as young as 11 were sexually abused and impregnated by peacekeepers and then, as one man put it, ‘left in misery’ to raise their children alone, often because the fathers are repatriated once the pregnancy becomes known.”

The report, based on interviews with approximately 2,500 Haitians, was published on December 17 in The Conversation, a liberal-left collaborative effort of hundreds of academics and reporters funded by dozens of universities and globalist foundations (Ford, Carnegie, Gates, Sloan, Lilly). As The New American has been reporting for years, the UN’s “peacekeeping” troops and  police forces are infamous for carrying out atrocities — mass slaughter, torture, rape, child sex trafficking, pillaging — all over the world.

In addition, thanks to totally irresponsible supervision by UN officials, its peacekeepers caused a cholera epidemic that has already killed about 10,000 in the last several years and has infected hundreds of thousands of Haitians with the deadly disease. It is still killing around 1,000 Haitians per year. As outrageous as the heinous acts of the UN’s “Blue Helmets” are, the repeated inaction, indifference, and cover-up by the UN’s top officials is in many ways even more outrageous. Even worse than turning a blind eye to the criminal activities of those whom they have charge over, UN officials have repeatedly retaliated against heroic whistleblowers that have come forward to expose peacekeeper abuses.

The authors of the new report, Professor Sabine Lee of Britain’s University of Birmingham and Susan Bartels of Queen’s University in Ontario, Canada, together with their research team, interviewed 2,500 Haitians during the summer of 2017. They found hundreds of cases of sexual exploitation and abuse, but as in past incidents of rampant peacekeeper criminality — in Haiti, Mali, Congo, Ivory Coast, South Sudan,  the Central African Republic, the Balkans, etc. — no one has been held to account.

The Lee-Bartels report is entitled “‘They put a few coins in your hands to drop a baby in you’ — 265 stories of Haitian children abandoned by UN fathers.” “The UN Stabilisation Mission in Haiti (MINUSTAH) — the longest running mission by the organization in the country (2004-2017) — was originally mandated to assist local Haitian institutions in a context of political instability and organized crime,” Lee and Bartels write. “Its mandate was then extended due to natural disasters, most notably an earthquake in 2010 and Hurricane Matthew in 2016, both of which added to the volatility of the political situation in the country. After 13 years of operation, MINUSTAH closed in October 2017, transitioning to the smaller UN Mission for Justice Support in Haiti (MINUJUSTH).”

“MINUSTAH is one of the most controversial UN missions ever,” the authors note. “It has been the focus of extensive allegations of sexual exploitation and abuse. A shocking number of uniformed and non-uniformed peacekeeping personnel have been linked to human rights abuses including sexual exploitation, rape, and even unlawful deaths.”

However, the UN deals with the recurring charges of brutality and sexual exploitation by simply delivering more pacifying rhetoric. “Let us declare in one voice: We will not tolerate anyone committing or condoning sexual exploitation and abuse. We will not let anyone cover up these crimes with the UN flag…. Let us make zero tolerance a reality,” UN Secretary-General Antonio Guterres said, before a group of world leaders in 2017.

But, as the Associated Press noted shortly after the Guterres pledge quoted above, it was all sound and fury signifying nothing. “In March, UN Secretary-General Antonio Guterres announced new measures to tackle sexual abuse and exploitation by UN peacekeepers and other personnel. But the proclamation had a depressingly familiar ring: More than a decade ago, the United Nations commissioned a report that promised to do much the same thing, yet most of the reforms never materialized,” the AP story noted. “For a full two years after those promises were made, the children in Haiti were passed around from soldier to soldier. And in the years since, peacekeepers have been accused of sexual abuse the world over.”

On its Web page promoting UN careers, the UN self-servingly proclaims: “Wherever help is needed and people are suffering you will find dedicated United Nations staff contributing their time, assistance and expertise to positively transform lives and make the world a safer and better place for this and future generations.”

As the UN’s atrocious record in country after country shows, such UN boasts are mendacious and hypocritical beyond measure. Contrary to the UN’s claim that it has a “zero tolerance” policy regarding sexual exploitation and abuse (SEA in UN jargon), the reality is that the UN has given de facto immunity to its minions to rape and exploit with impunity. When peacekeeper violations become so blatant that even the pro-UN Fake News media start to demand some accountability, the UN simply sends the offending criminals home and recycles Blue Helmets in from one of its other operations around the world. While prattling endless platitudes about “the rule of law” and “justice for victims,” the UN makes sure that its accused employees are whisked away from national jurisdictions where they might have to actually answer for their crimes.

As we reported in 2016, the UN’s own field operations director at the UN Office of the High Commissioner for Human Rights resigned in disgust over the UN’s determined resistance to correcting the systemic peacekeeper abuse, as well as the retaliatory attitude of UN officialdom toward whistleblowers. That UN employee, Swedish national Anders Kompass, said the “complete impunity” for officials and the “lack of accountability” is so entrenched in the UN that it was “impossible” for him to continue working there.

Responding to the Lee-Bartels report, the UN, on December 19, issued a typical public-relations statement: “Sexual exploitation & abuse is unacceptable: it undermines the crucial trust between our personnel and the people we serve. Our partnership with Member States is bearing fruit to ensure accountability, justice & assistance for victims.”

This vacuous statement is simply another indication that depending on the UN to police and regulate itself is a false hope. Expecting genuine reform at the UN — after decades of repeated promises of reform —is not only a delusion, but a dangerous, deadly delusion.

Alex Newman has been the point man for The New American over the past several years on UN peacekeeper abuses and atrocities. His stories (see the linked articles listed below) detail a staggering record of peacekeeper barbarism in Haiti and around the globe.