Robert Spencer: Elle Magazine Puts White Linda Sarsour on Its List of ‘Women of Color in Politics to Watch in 2020’ 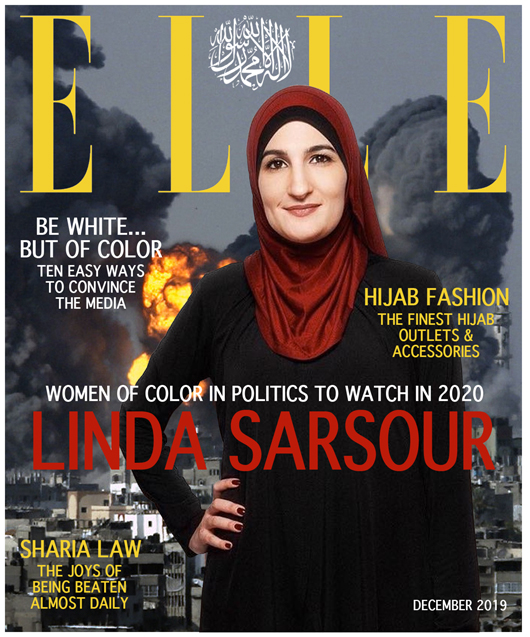 Elle magazine seems somewhat embarrassed by its list, published last week, of “20 Women of Color in Politics to Watch in 2020.” The article now carries this prominent disclaimer: “The below list was compiled by She the People, a national non profit network of women of color committed to social justice and voter mobilization. A previous version of this story did not make clear that the list was compiled by She the People and not ELLE magazine.” This was added because Elle faced a backlash for including the vehemently anti-Semitic Leftist activist Linda Sarsour on the list. But no one seems to have noticed another problem: the list is of “women of color,” and Sarsour is white.

Such minor quibbles will fall on deaf ears among Leftists. For the Left is at war not just with conservatives, but with reality itself. This has been clear for quite some time. Instead of trying to achieve some reconciliation with the nature of things as they are, the Left is growing ever more divorced from truth, reason, and ineluctable facts. For example, witness the hijab-wearing feminist (an oxymoron just as much as a white “woman of color,” as white is not a color in the Left’s world) Linda Sarsour’s magical race transformation.

It has been absurd enough to see Sarsour, a hijab-wearing defender of that most misogynistic of legal codes, Sharia, emerge as a champion of women’s rights and a feminist leader. But that was rational compared to the weapons-grade absurdity that Elle, or She The People, is now serving up regarding this palest of “women of color.”

The stage was set for Elle to anoint Sarsour as a “woman of color in politics to watch in 2020” several years ago, when the blogger Elder of Ziyon made an amazing discovery: Linda Sarsour claimed she “magically changed from white to a ‘woman of color’ in an instant,” just by putting on a hijab.

It’s true: in a Vox video published in January 2017, Sarsour said: When I wasn’t wearing hijab I was just some ordinary white girl from New York City.

But in an April 2017 interview of this hero of feminism, there is this: After watching Michelle Pfeiffer’s character in Dangerous Minds, Sarsour decided to become a high school teacher, “inspiring young people of color like me, to show them their potential.” She graduated a year early, gave birth to her eldest son, and enrolled in community college.

In the ensuing controversy, Linda Sarsour doubled down, saying: I’m Palestinian. If I want to say “I’m black,” I’m black!

What did being Palestinian have to do in Linda Sarsour’s crowded mind with her spurious claim of blackness? Well, it’s a fictional nationality, so Sarsour might as well take on a fictional race to go along with it. Maybe she was saying that since she had already made one fantasy a cornerstone of her public identity, adding another couldn’t hurt. As The Palestinian Delusion: The Catastrophic History of the Middle East Peace Process demonstrates, the “Palestinians” as a people were indistinguishable from the neighboring Arabs. The “Palestinian” ethnicity or nationality was never known or mentioned throughout human history until the 1960s, when Yasser Arafat and the KGB invented it as a stick to beat the Israelis with. Tiny Israel arrayed against 22 hostile Arab countries looked like the plucky, heroic underdog; but the tinier “Palestinian” people facing the massive Israeli war machine reversed the narrative.

PLO executive committee member Zahir Muhsein said this in 1977: The Palestinian people does not exist.

For tactical reasons, Jordan, which is a sovereign state with defined borders, cannot raise claims to Haifa and Jaffa, while as a “Palestinian,” I can undoubtedly demand Haifa, Jaffa, Beer-Sheva and Jerusalem.

However, the moment we reclaim our right to all of Palestine, we will not wait even a minute to unite Palestine and Jordan.

If Islamic jihadis (with considerable help from Marxist strategists) can invent an entire ethnic group, why can’t Linda Sarsour, a proud member of this invented ethnic group, change races? For “tactical reasons,” in order to identify with the fashionable victim classes instead of with the universally designated oppressor, white people?

Elle’s article shows that Sarsour’s tactic has worked wonderfully, and reality can take the hindmost. The Left left it behind long ago, and if you still pay attention to it, you’re just not woke.