Pamela Geller: The Ground Zero Mosque Project Is Back 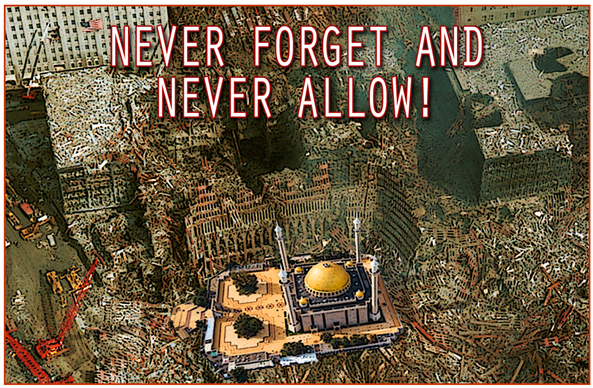 Lest we forget, the building of the intended “Islamic center” was destroyed in the 911 Islamic attacks. Human remains were found on the site. 9/11 families were joined by immigrants from India, Russia, Egypt, Israel, Africa, Iran and Europe to show opposition to the construction of a mega-mosque at our protest at Ground Zero. Others flew in from overseas to speak or just to share their particular ethnic communities’ experiences at the hands of moslems.

The news was buried under two dense paragraphs and five large photos in an article in New York YIMBY about a different project: “Construction has also yet to begin on 51 Park Place, which is slated to become a 71-foot-tall, 16,000-square-foot Islamic cultural center.”  The infamous Ground Zero Mosque project, a long buried effort to build a triumphal mosque at the site of the worst jihad terror attack in American history, is back.

Construction has yet to begin, but it will: the shady developer behind the Ground Zero Mosque scheme, Sharif El-Gamal, has been working to build this sinister structure for years.

We defeated the Ground Zero Mosque project once before.  The 16-story mosque that El-Gamal initially planned to build there has not been built.  Our efforts in showing what an insult it was to the American people and to the victims of 9/11, and how many Muslims worldwide would inevitably view it as a triumphal mosque built on the site of a jihad attack, defeated it.  Tens of thousands of people came out for our rallies in lower Manhattan against this celebration of this 9/11 attacks, and El-Gamal was beaten in the court of public opinion.

It was a long battle.  President Obama announced his support for the mosque at an Iftar dinner, no less.  Then-mayor of New York City and current presidential candidate Michael Bloomberg supported the mosque as well, claiming hysterically that “if we don’t build it, the terrorists will win!”  The media actively campaigned for it — the elites in their increasingly fragile ivory towers relentlessly stumped for the Cordoba mosque (euphemistically called an Islamic center with a prayer space) for years.

And yet despite all this opposition and much more, the people stood up and fought the Ground Zero Mosque and won.  An army of Davids.

But that wasn’t the end of the story.  Crains New York reported on El-Gamal’s new project in 2015 in a story that demonstrated how the developer was hoping to sneak his triumphal mosque into existence: “Mr. El-Gamal’s Soho Properties has proposed a 667-foot condominium tower at lower Manhattan’s 45 Park Place.  The glass skyscraper, which has yet to break ground, will include at least 15 full-floor units of 3,200 to 3,700 square feet, and average prices higher than $3,000 a square foot, according to plans released to Bloomberg by the developer.”

That sounded normal enough.  But then the article added: “Adjacent to the tower, Soho Properties will build a public plaza connected to a three-story Islamic museum and prayer space.”  An Islamic prayer space is a mosque.  The article also said: “An Islamic museum ‘is just as much of an insult,’ Pamela Geller, a blogger and one of the center’s most vocal opponents, wrote in an email.  ‘It will be like having a museum touting the glories of the Japanese Empire at Pearl Harbor.’”

I think an Islamic museum at Ground Zero dedicated to the half-billion victims of jihadi wars, land appropriations, sharia, cultural annihilations, enslavements, and sharia enforcement is an excellent idea, but is that what Sharif El-Gamal had in mind?  Of course not.  And how did El-Gamal plan to finance this?  The answer was predictable.  The New York Post reported in May 2016 that “the developer of the failed Ground Zero Mosque has nailed down ‘Sharia-compliant financing’ for a new, luxury condominium tower and Islamic cultural museum on the same site, he and his banking partners said.”

Then in May 2017, the New York Times ran a story entitled “Condo Tower to Rise Where Muslim Community Center Was Proposed.”  The Times said that “45 Park Place, a 43-story condominium that will soon rise three blocks from the World Trade Center,” was “something of a consolation prize for the developer,” as it “replaces the developer’s 2010 plan to build a 15-story Islamic mosque and cultural center on this site, an idea that erupted into a national controversy and cable news network bonanza.”

In the last couple of years, there has been virtually no news about this “Islamic museum.”  But the New York YIMBY story shows that the project has been advancing under cover of darkness.  A 71-foot-tall structure is three stories high, as in the revised plans announced in 2015.

El-Gamal has many friends and allies among New York City’s political and media elites.  It is likely that de Blasio city officials and the New York Times and other city papers all met with El-Gamal and agreed to keep the reporting on this project to an absolute minimum, so that it could get built without incurring the righteous anger of the public again.  The first time around, they courted publicity and tried to make El-Gamal a hero.  We demolished that and destroyed their plans.  So now they’ve clearly decided to go ahead surreptitiously.

It is disgusting that El-Gamal continues to taunt Americans and poke at America’s most egregious recent memory.  El-Gamal was there when we had tens of thousands in the streets opposing his Ground Zero mosque.  He knows how angry and upset people get at these Islamic structures on the site of jihad war.  The 9/11 Muslim terrorists extolled Allah no fewer than 90 times in their last letters.  Will those letters be on display at this Islamic cultural center/museum?

There is an important lesson to be learned here — and one we would be wise to adopt.  They never stop.  No matter how absolutely they lose, how many setbacks they suffer, they keep on pursuing their supremacist goals.

The Ground Zero Mosque project was and is a middle finger to the American people.  There has never been a mosque of reconciliation and healing built on the site of a jihadi attack.  Ever.  It is, on the other hand, an Islamic pattern to build triumphal mosques on the cherished sites of conquered lands.  History is riddled with triumphal mosques built on the sites of jihad attacks or appropriated from other religions: the Dome of the Rock and the al-Aqsa Mosque on the site of the Jewish Temple in Jerusalem, the Hagia Sophia in Istanbul, the Umayyad Mosque in Damascus, and innumerable mosques built on the sites of Hindu temples that were demolished by Muslims all attest to that.

And now it looks as if Sharif El-Gamal is going to be able to build his own triumphal mosque at Ground Zero after all.

Pamela Geller is the founder, editor and publisher of The Geller Report and President of the American Freedom Defense Initiative (AFDI) and Stop Islamization of America (SIOA). She is the author of Fatwa: Hunted in America (foreword by Geert Wilders) (Dangerous Books), The Post-American Presidency: The Obama Administration’s War on America (foreword by Ambassador John Bolton) (Simon & Schuster) and Stop the Islamization of America: A Practical Guide to the Resistance (WND Books). She is also a regular columnist for numerous publications.