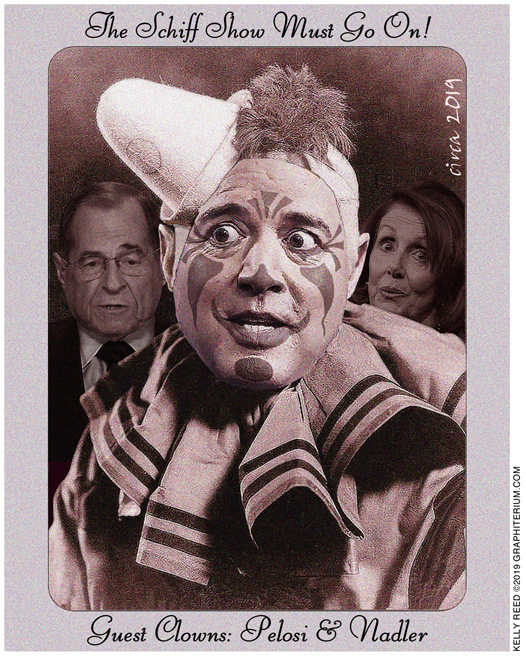 Representatives Adam Schiff and Jerry Nadler set a very dangerous precedent when they refused to conduct impeachment hearings according to constitutional due process standards. Democrats are so desperate for power that they would overturn the election of a President of the United States based on their biased and partisan interpretation of his telephone conversation with a foreign leader.

House Speaker Nancy Pelosi was initially reluctant to risk the electoral backlash of impeachment. She finally bowed to far-left pressure, ignoring the President’s astounding economic and foreign policy successes. Her worst nightmare is coming true — rising approval for President Trump and rising disapproval for the Democrat Party and their presidential candidates.

This is because the impeachment process we are witnessing is decidedly un-American. Using secretive, totalitarian-style, one-party interrogations is not due process and is unworthy of a constitutional republic.

Democrats ignored the constitutional standard for impeachment to remove a president:  “Treason, Bribery, or other High Crimes and Misdemeanors.”  No unbiased  adjudicator could conclude that President Trump’s telephone discussion with Ukraine President Volodymyr Zelensky is an impeachable offense. Far from a “high crime,” the President was carrying out his duty to the people of the United States. He was guarding our treasure and protecting our national integrity. Ukraine has been one of the most corrupt nations in the world, and he was right to request an investigation. If taxpayer funded aide was used as leverage to enrich the former vice president’s son, the American people should know.

Instead of thanking the President for his diligence, Democrats in Congress had the temerity to accuse him of committing an “abuse of power.” The Executive Branch of the United States government is separate and co-equal. George Washington University law professor and constitutional scholar Jonathan Turley told the House Judiciary Committee that it would be Congress abusing power if they try to stop the President from exercising his constitutional prerogatives. Schiff, Nader and Pelosi ignored that unbiased counsel.

They have chosen instead to drag the country through an impeachment process while trampling the constitutional and due process rights of a sitting President. If they ignore his rights, why would they respect those of the average citizen?

Due process rules are not reserved to criminal trials alone. They are essentially the same in regulatory and administrative hearings. Those rules reach even to private entities operating under “color of law.” To suggest that a proceeding as grave as a presidential impeachment need not follow the same basic procedural rules of fairness is ludicrous on its face.

Hearsay is excluded from evidence in court proceedings because it is notoriously unreliable. Yet Deputy Assistant Secretary of State George Kent and acting U.S. ambassador to Ukraine William Taylor were called before the House Intelligence Committee with great pomp and ceremony to offer only hearsay. Defendants always have a right to confront their accusers, yet the “whistleblower” remains an anonymous figure.

Adam Schiff went beyond hearsay to outright falsehood. Speaking on the floor of Congress, he reported that President Trump said to President Zelensky, “I want you to dig up dirt on my opponent and lots of it.” The President said nothing of the kind. Schiff later claimed it was a “parody.”  This is the same Adam Schiff who said he had incontrovertible evidence that President Trump colluded with Russia. The only conclusion supported by evidence is that Adam Schiff is a pathological liar.

Democrats also violated the principle that the accused has a right to a vigorous defense. The earliest hearings were closed to Republicans. Information from those inquiries was selectively leaked to the press. Depositions were taken in secret. Rep. Andy Biggs, Chairman of the House Freedom Caucus, compared the sessions to Soviet secret hearings. He proposed a resolution on the House floor to condemn and censure Schiff, but of course House Democrats tabled the proposal.

Long gone is the Democratic Party of President John F. Kennedy, Vice President Hubert Humphrey, Senators Scoop Jackson and Sam Nunn. It is now a party of hardcore leftists, more aligned with Karl Marx than Thomas Jefferson. They are now completely driven by extreme leftist ideology.  Lacking evidence that President Trump committed any crime or even did anything morally wrong, they recklessly passed articles of impeachment, with no regard to the great damage they are doing to our Republic. The Democratic Party once had statesmen, but it is now the refuge of demagogues.

Their Stalinist impeachment show trial demonstrated gross disrespect for our elections and the peaceful transition of power. This has been nothing less than an attempted coup d’etat, but these de facto communist revolutionaries will face the wrath of the American voter. Tuesday, November 3, 2020 will be a day of reckoning.