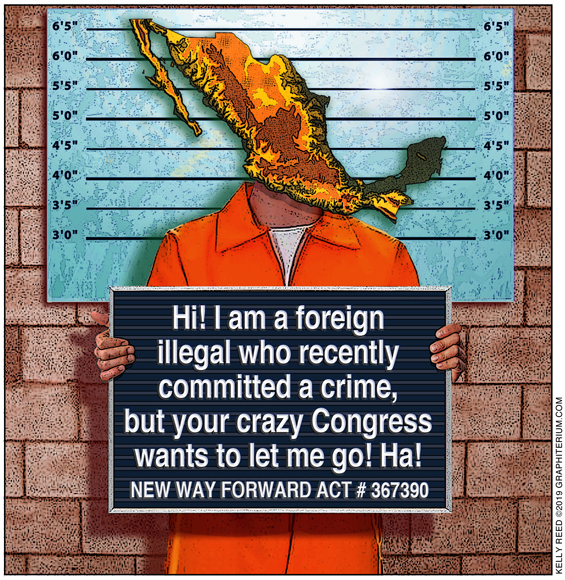 Democrats in the House of Representatives have proposed a new immigration bill called the New Way Forward Act. Although touted by the Sacramento Bee as, “[restoring] due process protections for all immigrants, including those in deportation proceedings, the bill does nothing of the sort. If enacted, what it would actually do is destroy the Immigration and Nationality Act (INA) and remove all distinctions between U.S. citizens, lawful immigrants, and illegal aliens.

Among the New Way Forward Act’s provisions are the following radical departures from current legal norms:
• End mandatory detention of aggravated felons.
• Exempt drug traffickers from deportation.
• Place a five-year statute of limitations on all deportations.
• Grant all foreign immigration violators a right to release from detention on bail.

As an example of the alien criminals who would benefit from the New Way Forward Act, the Sacramento Bee points to Cuong Nguyen. Nguyen came to the U.S. as a refugee at age 11. However, when he was a grown man, he knowingly transported illegal drugs to pay off a debt owed by his father.

Nguyen was arrested, convicted and served 24 months in prison. INA § 101(a)(43)(B) explicitly states that illicit trafficking of a controlled substance is a deportable offense. Therefore Nguyen’s conviction rendered him subject to removal from the United States and ineligible for any relief.

According to New Way Forward Act sponsor Ayanna Pressley, that’s evidence of “racial and anti-immigrant injustices embedded in our immigration laws.” And that’s why, in her opinion, we need her bill.

But it should be obvious that it’s actually Pressley and her ilk who are being racist. Their approach to immigration law presumes that all non-European immigrants, no matter how long they have been in the United States, are hapless victims, forced into a life of crime by a racist system. It’s an example of what Bush ’43 speechwriter Michael Gerson labeled the “the soft bigotry of low expectations.”

Bizarrely, Pressley and her cohort make the “hapless victim” argument while simultaneously claiming that immigrants are essential to the U.S. because they are more entrepreneurial than native-born Americans. But that’s a prime example of cognitive dissonance in action. One can be a hapless victim, or one can be an intelligent individual in control of one’s own destiny. It’s impossible to be both.

People who care about the rule of law in the United States cannot afford to succumb to emotional caricatures that portray immigrants like two-dimensional characters in made-for-TV movies. The most just approach we can take is to hold immigrants to the same standards as we hold ourselves. In fact, one of the reasons immigrants want to come here is because we have a free and fair legal system.

So instead of asking how we can give foreign felons a greater chance to remain in the U.S., we should begin asking more important questions: Why do legislators like Ayanna Pressley balk at the notion of holding immigrants to the baseline requirements of our society – like holding down a job, supporting one’s children, and staying out of trouble with the law? And why do they exalt foreigners, even those who fail to live up to those baseline requirements, even as they deride honest, hard-working Americans as “racists” for simply expecting foreign guests to obey American laws?

In reality, the best way forward is to stop infantilizing immigrants and demonizing Americans. In a world inhabited by people, not cartoons, it isn’t remotely unfair to expect adults – immigrant or citizen – to accept responsibility when they commit serious crimes.