Bill Lockwood: Was Jesus a “Refugee?” 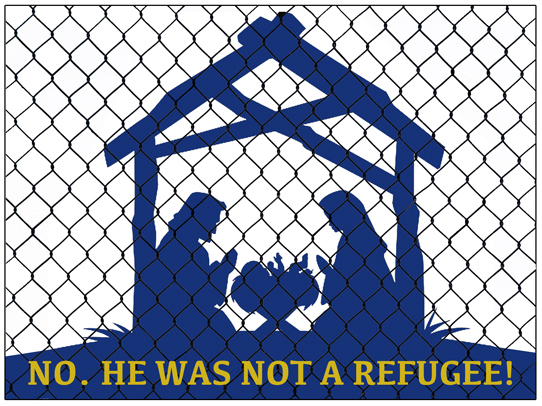 As reported by CNN, a Methodist church in California is displaying a nativity scene depicting Jesus, Mary and Joseph as refugees in cages to “draw attention to the conditions faced by migrants seeking asylum in the United States.” The Claremont United Methodist Church, which is about 30 miles east of Los Angeles, “posted the photo on its website showing the three held in separate cages topped with barbed wire. The baby Jesus is wrapped in a silver foil blanket.” The “lead pastor” Karen Clark Ristine told CNN that “we thought about the most famous refugee family in the world.”

The United Methodist Church, ever ready to warp biblical narratives into liberal political messages, has displayed a stunning ignorance of the Bible. As Gary DeMar observes, “Leftists have little regard for the Bible unless it can be used to scold Christians for judging righteously … and to support socialism based on a passage about voluntary giving (Acts 2:42-45; 4:32-35).”

As I wrote in a former article, there are several biblical considerations that need be made. (1) God Himself established borders of nations. Read Acts 17:26. (2) God demanded that Old Testament Israel respect the borders of other nations. God gave Mt. Seir to Esau and his descendants for a “possession.” Therefore, Israel, when coming out of Egypt, was not to cross it (Deuteronomy. 2:5). The same regarded Israel’s respect of Moab’s borders.

(3) Once settled in Canaan, the Israelites were sternly warned to “drive the Canaanites out.” The stated reason for this was to preserve the culture of Israel (Numbers. 33:51,52). (4) Even Abraham was deported once it was discovered that he lied to border agents. Read Genesis 12. (5) Regarding Jesus and the holy family, as DeMar notes, they were living within the confines of the Roman Empire. Egypt was part of the Roman Empire at the time of Jesus’ birth. Their escape from Bethlehem was only to another Roman Province. (6) Another command given to Joseph and Mary was that they were to return to their homeland after the death of Herod (Matthew. 2:20). DeMar asks, “How many refugees return to their home nations after entering the United States?”