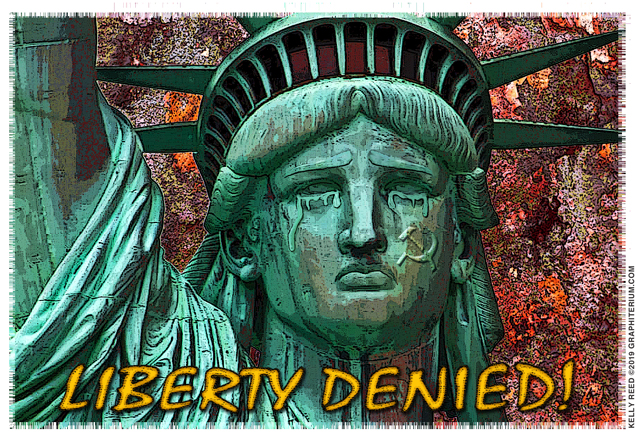 Freedom irritates the left. Not their own freedom—but yours. Democrats live with a hatred; a despising of the very principle of liberty. This is the essential difference between the left and the right—not merely how spend money and upon what—but whether or not to curtail your freedom.

Consider free speech. The free and open exchange of ideas has been the hallmark of American society for over two centuries. The First Amendment has served as a prohibition against the Federal Government from managing any kind of speech. Alarmingly, however, more than one-half of Americans today favor a “re-writing” of the First Amendment whereby “hate speech” would be illegal. The survey was taken by the nonpartisan Campaign for Free Speech (CFS).

As everyone knows, the determination of what constitutes “hate speech” is the crux. Who will determine what type of speech is hateful enough to be illegal? (see First Liberty Institute article, 11-15-19).

College campuses lead the nation in showing contempt for free speech. Most college students, according to surveys, want restrictions on what they call “offensive” speech. Marxist professors have instilled a pure hatred for free speech in the student bodies. Witness the hostile reception conservative speakers have had at various Universities around the country.

Even the liberal American Bar Association (ABA) documents in a recent article the silencing of various speakers at college campuses. The authors, Stephen J. Wermiel & Josh Blackman, try to explain that it comes from “both sides”, left and right, but conclude that the “incidents” of disruption to speakers on the liberal side are “less common.” Indeed! And it is more than a stretch to say that “hecklers” wearing “Make America Great Again” hats equate with the violence of shutting down speakers and forcing college campuses to withdraw conservative invitations to speak. Silencing by force is the leftist method.

Force has been used so much by the left that some Republican-led state legislatures have felt the need to impose policies on their state university campuses to allow free speech.

Under the rubric of “hate speech” the big tech giants Facebook and YouTube have already shut down Alex Jones’ voice on InfoWars.  Some Christian voices, like Julio Severo, are put in “Facebook jail” for posting Bible verses such as about homosexuality. Google suppressed Prager University and Twitter temporarily banned Candace Owens. So prevalent has this forcible silencing of speech been on the left that Bill Maher was compelled to ask, “If you’re a liberal, you’re supposed to be for free speech. That’s free speech for the speech that you hate.”

Consider Climate Change. The Paris Climate Accord from which Trump withdrew in 2017 is all about force. Those who preach the Green Gospel of saving the planet cannot garner enough support for their message by normal debate and means of persuasion. Therefore, these globalists wish to sign American taxpayers on to a globalist “Carbon Pricing Panel” whereby the dictators of the United Nations will force reparations from the United States to pay for our environmental sins. These payments will be distributed to Third World and developing nations.

All of us have pulpits. Some of us preach the gospel of Christ and by reasons addressed to the mind ask worshippers to contribute in collection trays. Leftists and socialists of the Democrat Party cannot garner enough support for their doomsday message that the Sky is Falling, consequently they must save us all—by forcing us to pay contributions to their collection baskets. They cannot rely on freedom or the free-flow of ideas, so proponents of the Green Gospel use force.

Fred Singer, prominent scientist at the Heartland summit, a University of Virginia environmental science Professor Emeritus, and founder of the Nongovernmental International Panel on Climate Change, observed, “This is about money and power. Science plays a small role, and mostly it’s being misused….It’s a matter of really trying to control things.”

Consider attacks on private property. So essential is this to freedom that John Adams commented that this was the single foundation stone undergirding all human freedom and liberty. “Property must be secured or liberty cannot exist.”

The left knows this as well. The all-out attack on private property by the program Affirmatively Furthering Fair Housing (AFFH), fostered by the United Nations’ Sustainable Development program and flourishing under HUD funding, has become common-place in American cities.

Big government planners do not like that you have the “freedom of association.” Liberty to live where you like and with those whom you are most comfortable is anathema. We must pare down your liberty branches! Cities are bribed with the endless access to federal money to “re-distribute” the racial mixes of their populations. Cities such as Baltimore, MD are placing minority families in white suburbia. No freedom here.

Liberal bastion Minneapolis, Minnesota became the first city to end single-family zoning. The Mayor of the city called such housing a mark of racism and “self-segregation” that must be halted at once. The white population is in his cross-hairs. Other cities are beginning to follow suit. 1

There are also a large number of organizations, such as Center for Study of Social Policy, Program for Environmental and Regional Equity (PERE); Center for American Progress (CAP); W. Kellogg Foundation, Annie E. Casey Foundation, and others, that are in the business of bribing cities with large amounts of George Soros money to forcibly re-zone various neighborhoods or re-draw school boundaries to dismantle schools that have “too large a white or Asian population.” 2

Another group, PolicyLink, a radical activist group, pushes policies such as “parks equity” which states that lack of access to city parks are partly responsible for “racial performance gaps” in school and on the job. The manifesto therefore is for middle-class tax-payers, once again by force, to begin funding more parks in slum areas of the country.

The common denominator in all of this is lack of freedom. Force replaces it. This is the tool of the left.