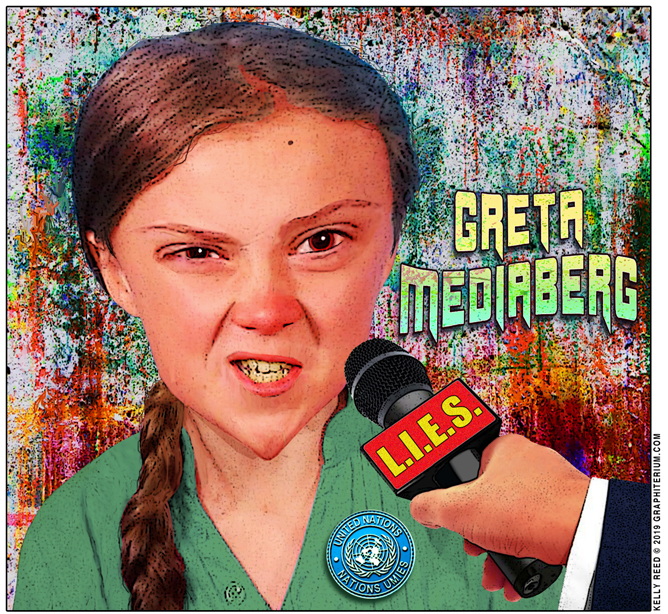 The Fake News Media has been caught again with pants down. The Daily Callerbroke the story on November 18, revealing that more than 250 U.S. news outlets and journalists had colluded in an effort to promote the idea that the planet faces a “climate crisis,” and to build support for the United Nations Climate Action Summit of world leaders held in New York City, September 15-23. Not that there was any paucity of lurid global warming propaganda; anyone who hasn’t assumed room temperature knows that we have been marinated in “news” stories proclaiming climate apocalypse for decades now.

However, there are still too many skeptical Americans who haven’t bought the over-heated hype and are not quite ready to accept the draconian government controls and pay the trillions of dollars we are told will be necessary to save the planet from man-made global warming. So “the good and the great” of the Fourth Estate decided they need to kick it up a few notches and really saturate the American public with intense fright peddling to drive home the new meme that we are facing a truly dire “climate emergency.”

Thus was launched Covering Climate Now, a massive effort to shape and coordinate an advocacy campaign camouflaged as news.  According to the organization’s own website, “Covering Climate Now is a joint initiative of The Nation and Columbia Journalism Review.” The Nation prides itself in being the oldest socialist magazine in America, and Columbia Journalism Review (CJR), flagship publication of Columbia University Graduate School of Journalism, postures as a model of professionalism and journalistic ethics.

The Covering Climate Now website boasts: “Our initiative includes more than 350 outlets worldwide, and dozens of institutional and independent partners, with a combined audience of more than 1 billion people. We’re growing every day.”

“Covering Climate Now’s founders kicked off the project in April and announced in May that they would ask partners to devote a week to climate-related news, starting in September,” the Daily Caller reported. “The Nation environmental correspondent Mark Hertsgaard co-founded the project under the assumption that the news outlets don’t cover climate change as urgently as he thinks they should.”

“We believe that every news organization in America, and many around the world, can play a part,” CJR stated in May. ”Sometimes that will mean committing your newsroom to important and high-impact stories. Other times it will mean sharing your content, engaging your community, or adding a few lines of climate information to stories that wouldn’t otherwise have them.”

“Much of the group’s coverage leading up to the U.S. climate summit,” notes the Daily Caller, “focused on Swedish activist Greta Thunberg, a 16-year-old girl who traveled to the U.S. in August on a racing yacht. Her visit was designed to galvanize American support for policies that seek to tackle climate change.”

That the tsunami of Thunberg stories was a completely orchestrated affair comes as no surprise to anyone who glimpsed even a fraction of the staged “news” events for the bratty, self-righteous teen, who delivered her venomous “How dare you!” speech to world leaders at the UN. Her apotheosis from pigtailed schoolgirl to beyond-rock-star, messiah status was obviously a contrived, concerted effort that went beyond the usual “Leftward Ho!” herd mentality of the “mainstream” media pack.

Collectively, the cabal succeeded wildly in drenching the planet with a suffocating blanket of global warming hype. As one example, take BuzzFeed. The Daily Caller reports: “BuzzFeed News reached more than 27 million unique views between September and October, according to Quantcast, a website measuring audience size. BuzzFeed is owned by Jonah Peretti, an internet entrepreneur who founded the outlet in 2006 to track viral online content, and the left-leaning HuffPo is owned by Verizon Communications. Media tycoon Arianna Huffington originally founded HuffPo in 2005 with the help of Peretti.”

This not the first time the media mavens have been caught in flagrante delicto. Remember the JournoList scandal of 2008, the scheme by the Washington Post’s Ezra Klein that recruited hundreds of reporters and news organizations to promote and defend then-candidate Barack Obama?

Then there was the Gamechanger Salon scandal, in which lesbian “community organizer,” CNN commentator and Obama/Clinton crony Sally Kohn was ringleader to more than 1,000 activists from Planned Parenthood, Big Media, Big Labor, and other “progressive” centers of power.

Then, last year there was the very open collusion scandal of more than 100 newspapers agreeing to simultaneously run anti-Trump editorials.

The media collusion exposed in the Covering Climate Now scandal is but the latest revelation proving that most of the “legacy media,” as well as much of the newer “alternative media” are indeed Fake News, as President Trump has charged.