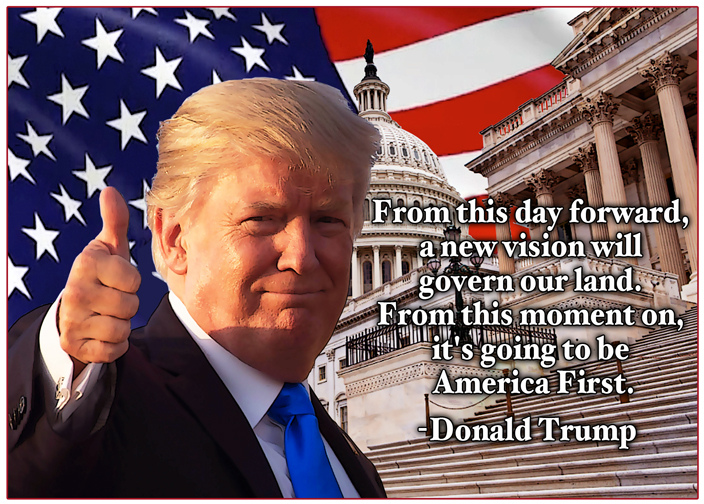 Not presuming to speak for all Christians, I do, however, wish to offer a few observations regarding the general support of Donald J. Trump by Christians and Constitutionalists. This is timely seeing that so many on the socialistic/Democratic side of the political spectrum love to harangue Trump-supporting Christians about the past personal behavior of Trump. They seem to delight in pointing out his multiple marriages, his infidelities, his foul language, or other personal indiscretions, always with a view to shaming Christians for their support.

First, no Christian of which I am aware excuses Trump’s personal sins. But this is a far cry from an elected official such as Bill Clinton using his powerful position as the chief executive to assault women in the oval office. On a broader scale, if an angry press would devote itself to scouring all public officials with the scrutiny they have applied to Donald Trump, I doubt there would be many officials to escape unscathed. So, what does this mean? Stop participating in the election process because those whom we elect have soiled lives? I suspect that is what the left really desires.

Second, I readily confess that the ideal is as stated by John Adams. “He therefore is the truest friend to the liberty of his country who tries the most to promote its virtue, and who, so far as his power and influence extend, will not suffer a man to be chosen into any office of power and trust who is not a wise and virtuous man.”

Thomas Jefferson agreed. “For promoting the public happiness, those persons whom nature has endowed with genius and virtue … should be able to guard the sacred deposit of the rights and liberties of their fellow citizens …” But where are we as a society?

It is needless to point out here that our entire culture for the past 75 years has been more reflective of Sodom and Gomorrah than the “shining city on a hill” that John Winthrop paraphrased from the words of our Savior. There is without question a deep-dyed wickedness in the populace that is corroding the nation’s soul. Finding a virtuous and godly person that will fill the position of a “natural aristocracy,” as Jefferson worded it, and willing to put themselves into the grinding mill of the political arena, is nearly an impossible task.

Third, with the above in mind, many Christians primarily have relied upon the simple principle of how best to secure our God-given liberties? Since the entire history of civilization is nothing but the story of suffering peoples at the hands of their own governments, which candidate will support the kinds of Constitutional principles that more positively reflect that? Or, more pointedly, do Donald Trump’s policies lessen the vice-grip of government, or do the Democratic policies? To ask the question is to answer it.

One must recognize that political power always, without fail, gravitates toward centralization and that this movement always erodes and destroys the liberty of people by removing the decision-making processes and transferring them to that central government. Christians therefore, have wisely resisted the growth of government. And it is only Donald J. Trump, even with his brass-knuckle less-than-genteel approach, who can drain the swamp that threatens to drown us all.

The Jews in the time of Christ did not enjoy even a modicum of the liberty that we now have as Christians in America. As a matter of fact, Israel’s sovereignty had been removed from the period of the Assyrian Empire in the Old Testament (8th century B.C.) and was never regained. The mighty Roman empire controlled Palestine during the birth of our Lord, and the Jewish people suffered beneath the local rule of one wicked Procurator after another.

So, when a Quirinius, the Legate of Syria (Luke 2:1-3), would order a census in Palestine with a view to taxation, the Jews submitted even though despising it. So also other governors of Syria such as Coponius, Marcus Ambivius, and Valerius Gratus, who followed Quirinius. Other various fiscal oppressions of a grievous sort were practiced by Romans against the Jewish people. All of these the Jews loathed, but tolerated.

This was because these governors generally respected the religious feelings of the Jews and gave wide latitude to Jewish practices and scruples. We know, for example, that they removed the image of the Emperor from the standards of Roman soldiers before marching them into Jerusalem, so as to avoid the appearance of a cultus of the Caesars (Alfred Edersheim, The Life and Times of Jesus the Messiah, vol. I, p. 242).

But all of that was far different from a Pontius Pilate who forced the hated emblem on the Jews and defied all of their most sacred feelings.

This is not unlike the political scene today. A secular society continues to dominate our culture, which Christians decry. Christians tolerate, probably too much, the unconstitutional and ungodly measures in our country. But this is completely different from a Democratic leader such as Barack Obama who publicly mocks the Bible, engineers the redefinition of marriage, rubs Christian noses in the murder of the unborn, and parades to the world that we are not a Christian nation.

Added to that is the fact that in the end, not only has President Trump boldly stood for a more biblical stance in public policy, but has sought to massively de-regulate the unconstitutional super-state in which we live. A report by the Council of Economic Advisors in June, 2019 estimates that after 5-10 years of the new de-regulatory approach of the Federal Government household incomes will have been raised by $3,100 per household per year.

Casey Mulligan, the chief economist for the CEA, explained that “The deregulatory efforts of the Trump Administration have … removed mandates from employers, especially smaller businesses, and have removed burdens that would have eliminated many small bank lenders from the marketplace. These deregulatory actions are raising real incomes by increasing competition, productivity, and wages.”

In the end, however, it is not merely economic prosperity that many Christians desire. It is to secure our God-given liberties by rolling back the unconstitutional government in which we live. Donald J. Trump seems to be the only person with enough back-bone to attempt this daunting task. I suspect that the radical left realizes this fact which explains their mindless hatred and opposition.