Bill Lockwood: Socialism: Coming to a Neighborhood Near You 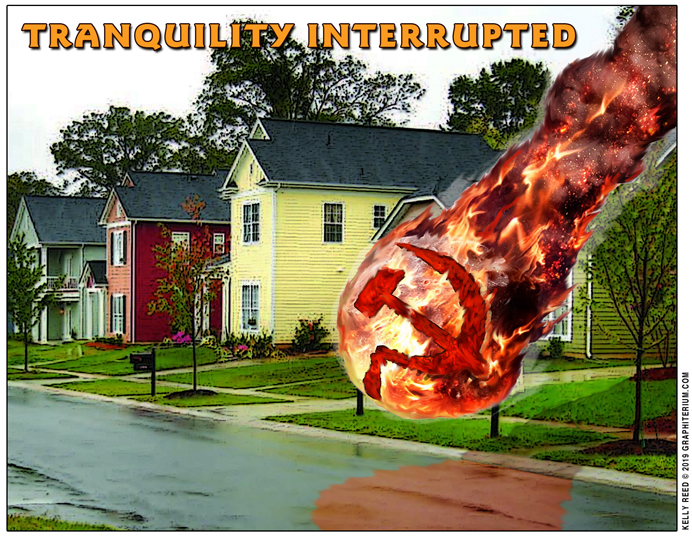 As documented by Luke Rosiak of The Daily Caller there are many socialistic organizations that have bypassed around the Congress of the United States and are transforming local American communities into little Leningrads after the likeness of the old Soviet Union. This is all done using the tool of RACE, supported by the “junk science” of leftist Universities. As a matter of fact, there is an entire network of George Soros-backed activist groups that have been pushing these policies at local levels. The catch-word that they use is EQUITY. Everything must be EQUITABLE.

For example, in many communities across America, local politicians have begun proposing “comprehensive race-based policies such as redrawing school boundaries to dismantle schools with too many white or Asian students.” The justification for this is “Equity.”

Margaret McCreary, a Fairfax County, Virginia, parent noted that the school board members all began using “equity” language to push a proposal that could move her children out of their schools. “It seemed like they were all in cahoots to do something, but at first we didn’t know what to make of it, because we didn’t know what they were talking about,” she told The Daily Caller.

This simply meant that unelected bureaucrats of a socialistic engineering stripe would seek to make the schools more “proportionate” by racial population. Too many whites and Asians congregate together and their parents naturally gravitate toward neighborhoods of similar racial population. These local schools reflect this “racial” imbalance.

The same goes for poorer minority neighborhoods and schools. Socialists like Barack Obama think this an atrocity for the common people to mingle with people with which they have the most in common. Activist busybodies, however, tone down their rhetoric and instead of “proportionate” they now use the word “equity.” A “white middle class” neighborhood is “inequitable.” Socialists need to make it more “equitable” by mixing up the population.

Fairfax was only one of many communities where these policies are being implemented. But these policies are much broader than local school districts. In a recent article, Interrupting the School-to-Prison Pipeline Through Cultural Organizing (9-12-19), radical activist group PolicyLink explained that the Equity projects actually target entire communities, principally through THREE main systems: “education, law enforcement, and juvenile justice, and it centers the perspectives of youth and families who are most impacted on transforming those systems; dismantling the school-to-prison pipeline; and making communities just, safe, and whole.”

Social engineering from the top down of which Saul Alinsky would be proud.

How are entire local communities being radically transformed by these intrusive socialistic meddling policies?

First, academia has provided the so-called research. For example, a group tied to the University of Southern California (USC) called Program for Environmental and Regional Equity (PERE) functions to create the research that promises BILLIONS of dollars in economic growth to cities if they adopt certain policies. All government programs will be EQUITABLE.

Second, there are a cluster of “Community Organizing” groups, all primarily funded by George Soros and related magnates, that have set in motion to bring about these “equitable” changes. Some of these “community manipulating” groups include Center for the Study of Social Policy (CSSP); Program for Environmental and Regional Equity (PERE); Government Alliance on Race Equity (GARE); PolicyLink; Center for American Progress (CAP); Race Forward; Haas Institute for Fair and Inclusive Society; Center for Social Inclusion (CSI); Center for Study of Immigrant Integration (CSII); Partnership for Southern Equity; W. Kellogg Foundation; Annie E. Casey Foundation; Foundation for Open Society; and California Planning Roundtable. 1

An example of how these organizations mobilize by propaganda is a recent article in PolicyLink (9/12/19) entitled Interrupting the School-to-Prison Pipeline through Cultural Organizing. In it we are informed that to “reduce” the “harm of policing” in poorer neighborhoods we need to challenge the “untested assumptions about the value-add of law enforcement.” It asserts that things like “parks equity” will assist to bridge racial performance gaps.

Translated, this means that poorer neighborhoods do not have the nice parks that more affluent neighborhoods do, and that local law enforcement are too involved in minority communities. Local policies will have to shift tax dollars around to change this.

Third, a sales pitch must be activated to bribe and lure unsuspecting local communities into this hole. Here is where academia comes in to play.

Rosiak explains that Fairfax County, Virginia, a wealthy District of Columbia suburb, was sold on sweeping social changes after county employees attended a 2014 conference to a group called the Local and Regional Government Alliance on Race and Equity (GARE). County officials were sold on making Fairfax County more wealthy. They adopted a program called “One Fairfax.”

GARE, combining efforts with PolicyLink and the Program for Environmental and Regional Equity at USC showed Fairfax what was called an “Equitable Growth Profile.” This “profile” found that the county’s gross domestic product would have been $26.2 billion higher in 2012 IF ITS RACIAL GAPS IN INCOME WERE CLOSED. 2 “’One Fairfax’ can only be realized with an intentional racial and social equity policy at its core for all publicly delivered services. A racial and social equity policy provides both the direction and means to eliminate disparities.”

This is less than “Junk Science.” It is foolishness that denies common sense as well as human nature and that not everyone has the same capacity or desire to labor to earn the same amount of money as the next person. It also assumes without a shred of proof that disparity between incomes among different racial groups is due to some sort of ugly racism in the majority white population.

Listen to the same sales pitch by National Equity Atlas, and online tool created by PolicyLink, as it theorizes about Albuquerque, New Mexico. “We estimate that the Albuquerque metro economy would have been $11 Billion large in 2015 absent its racial inequities in income.” This is from PERE’s paper on the Albuquerque.

“Using data on income by race, we calculated how much higher total economic output would have been in 2014 if all racial groups who currently earn less than Whites had earned similar average incomes as their White counterparts, controlling for age.”

This is the core of it. No real science. No real examination of root causes of men’s successes and failures. No reality. Only the unsupported assumption that minority communities are poorer than white communities because of a racist mentality that exists in white America. THIS is the “racism” that socialist engineers are seeking to eliminate by hook or crook under the guise of EQUITY.

1 Luke Rosiak put this list together. See also my article on Juvenile Detention Alternative Initiative (JDAI) published on this website.

2 Fairfax’s web-page, as reported by Rosiak.