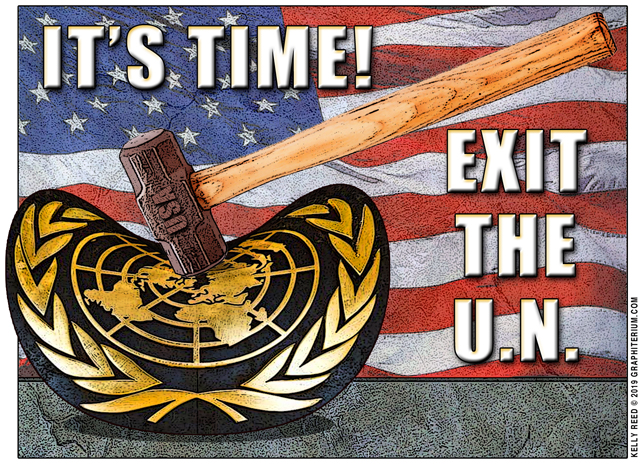 In September of 2000 the UN held its Millennium Summit in New York City to announce its 8 goals to impose the transformation of the world under Sustainable Development.

In response, on September 7, 2000, as nearly every head of state and world leader gathered at the United Nations headquarters, the American Policy Center (APC) held a news conference on Capital Hill calling for an end to the United States membership in the UN. To back up its demands, APC delivered more than 500,000 petitions in support of Rep. Ron Paul’s National Sovereignty Restoration Act (HR 1146).

The petitions, weighing more than 1.5 tons, served as the backdrop for the news conference as Rep. Paul and the late Rep. Helen Chenoweth-Hage spoke to reporters about the threat of the UN to the United States. More leaders who spoke at the event, Hosted by APC president Tom DeWeese, included the late Henry Lamb of Sovereignty International, Constitutional expert Herb Titus, the late Kent Snyder of the Liberty Study Committee and Cliff Kincaid of America’s Survival.

The News Conference was aired to millions over the CSPAN cable network and helped APC launch a renewed war against the UN’s relentless drive for global governance.

This video of that 2000 news conference is especially significant as Congressman Mike Rogers (R-Ala) has now introduced his bill, called the American Sovereignty Restoration Act (H.R. 204), to again call for the United States to Exit the United Nations. It’s time to renew the fight to stop the UN’s drive for global governance.