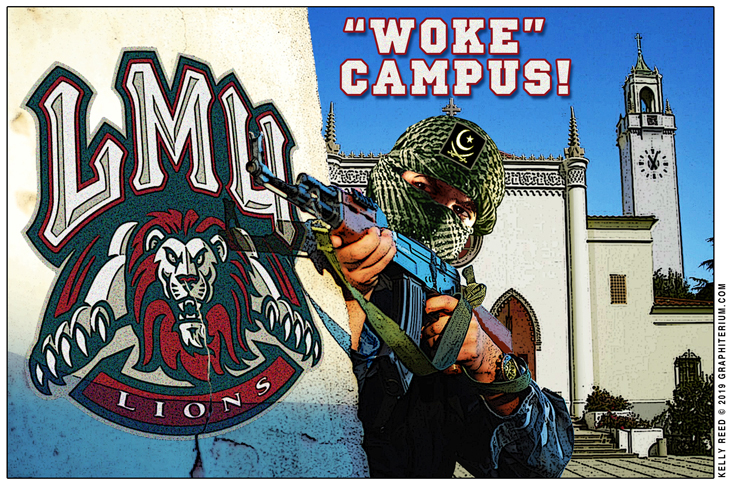 The Los Angeles Loyolan tells us that it is Loyola Marymount University’s “award-winning, student-run news organization,” and it is not surprising that it would have won awards from the people who give out awards these days, because like all campus papers, it is a reliable guide to how deeply the far-Left indoctrination that most professors are conducting is taking root in their unwitting students. One of those students is the Assistant Opinion Editor for the Los Angeles Loyolan, a young man (I know that because he helpfully informs us that his pronouns are “He/Him/His”) named Cristobal Spielmann, who is, like all well-informed, duly woke students today, horrified at the prospect that someone would be so “racist” as to oppose jihad mass murder and Sharia oppression of women and others.

Inside Higher Ed may weep bitter crocodile tears over my noting the ominous assumptions behind Spielmann’s words, as the young fellow is only a child, but he is a child putting his views out in the public forum, and consequently must deal with public dissent from his views – at least until he and his fellow fascists secure power.

And Spielmann’s views are indeed ominous. I am an “anti-Muslim extremist,” he claims in an extended complaint against Loyola Marymount’s Young Americans for Freedom chapter, and offers this as his explanation of why: a pamphlet I wrote “takes every opportunity to paint the near entirety of Islam and the Quran as violent while creating a paranoid ‘us vs. them’ narrative of the West in a moral struggle with Islam.”

In reality, of course, the West is not in the least engaged in a moral struggle with Islam. Many Muslims, however, are in a moral struggle with the West and other non-Muslim entities. Apparently it is “Islamophobic” to take any notice of that. It is objectionable enough just to note that the Qur’an has passages calling for violence against non-Muslims. Did I misquote the Qur’an, or state its contents inaccurately? Spielmann had the residual honesty not to go so far as to say that, and of course he would not have been able to say it if he meant to tell the truth at all, since I don’t misquote or misrepresent the Qur’an. He just doesn’t like what I said about it, because it doesn’t fit the way he wants to pretend that the world is.

Even worse, “This isn’t even the first time that the LMU chapter of YAF has engaged in Islamophobia. Last fall semester, YAF posted a counter-jihad poster…”

So now it’s “Islamophobic,” at least at Loyola Marymount University, even to oppose jihad and to post a “counter-jihad poster.” Apparently now even opposing jihad, the imperative that led Mohamed Atta and his comrades to murder 3,000 people on September 11, 2001, and that has been the driving force behind over 36,000 terror attacks worldwide since that date, is “Islamophobic.”

This has been a long time coming. The seeds of it were planted the first time the establishment media labeled opposition to jihad terror and Sharia oppression “anti-Muslim.” If it’s anti-Muslim to oppose those things, then the establishment media narrative that such violence and oppression is perpetrated only by a tiny minority of extremists that misunderstands its own religion is false – but of course no establishment counterterror analyst has ever taken notice of that.

I have for years pointed out that when foes of jihad terror are smeared as “anti-Muslim” and “Islamophobic,” without any attempt whatsoever to delineate a proper and respectable response to that terror, then all resistance to the advancing jihad is stigmatized, and ultimately becomes impossible. That is exactly where we are now, in the thoroughly indoctrinated mind of young Cristobal Spielmann and millions of others like him. Leftist professors all over the country are turning out people like Cristobal on a daily basis. Before too long they will likely make it altogether impossible to say the slightest negative word about jihad mass murder, and when they do so, they will think they are doing something righteous. By that time even the most happily blinkered Leftist may wake up to what is happening. But it will be too late.