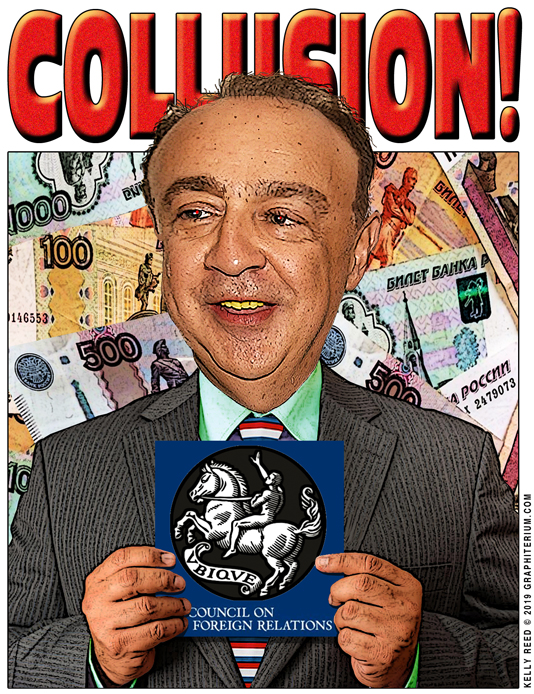 Perhaps there really has been some Russia collusion. The globalist Deep State organization known as the Council on Foreign Relations is under fire after it was exposed taking a massive “donation” from Soviet-born oligarch Len Blavatnik (shown), a close crony of Russian strongman Vladimir Putin and his corrupt minions. The shady billionaire has also been showering money on U.S. politicians on both sides of the aisle.

The $12 million “gift” to the CFR, reported publicly by the New York Post and other publications, was described as “influence buying” by critics. Beyond that, it appears to highlight the broader problem of systemic corruption within the U.S. foreign-policy establishment, which will gladly take “donations” to its foundations in exchange for favors. The Clinton Foundation, for instance, has long been accused of serving as an influence-buying machine for foreign governments. It seems the CFR has a similar problem.

The explosive revelation led to dozens of high-profile figures calling on the controversial “think tank” to return the money. In a letter dated September 18, the coalition of 56 critics noted that Blavatnik “acquired his initial wealth by way of highly questionable transactions in tandem with the regimes of [ex-Kazakhstan president] Nursultan Nazarbayev and Vladimir Putin.”

Then, he used shady tactics to keep and expand his fortune. “Blavatnik protected that wealth in part through strategic alliances with security personnel and practices that would surely be considered criminal in any democracy,” the letter continued, calling on the CFR to return the money to avoid “reputational damage” from associating with somebody like Blavatnik with “close ties to the Kremlin and its kleptocratic network.”

After citing some of the ultra-shady deals Blavatnik has been involved with, the coalition also highlighted his ties to Putin’s circle of cronies. “Blavatnik’s connections to corrupt Putin-supported oligarchs and officials are longstanding and well known,” they wrote. “For example, Blavatnik’s business partners include several individuals who are sanctioned by the United States government, such as Viktor Vekselberg, Oleg Deripaska, and Alexander Makhonov.” Citing Spanish wiretaps, the critics also suggested he had ties to the mafia.

“It is our considered view that Blavatnik uses his ‘philanthropy’— funds obtained by and with the consent of the Kremlin, at the expense of the state budget and the Russian people — at leading western academic and cultural institutions to advance his access to political circles,” the letter blasting the CFR explained. “Such ‘philanthropic’ capital enables the infiltration of the US and UK political and economic establishments at the highest levels.”

But CFR boss Richard Haass, a leading globalist architect, defended the donation and said the response from other CFR members to it had been overwhelmingly “positive.” In fact, the CFR’s website still has a glowing biography of Blavatnik, himself a CFR member, posted online, along with information touting the “Blavatnik internship program,” his giant donation will fund.

The gift by Blavatnik “will further CFR’s efforts to develop the next generation of leaders in government, academia and the private sector,” continued Haass, an anti-Trump globalist who has worked for many years to undermine U.S. national sovereignty. “We are proud to find our selves in such distinguished company,” he added.

On the CFR website, the deep state outfit touted the donation, too. “Blavatnik interns gain new insights into critical foreign policy issues and interact directly with leading experts and practitioners,” it said. “They are offered professional development training to complement their substantive work with a series of skill-based workshops, trainings, and career advice sessions as a foundation for future work in the field of foreign policy and international affairs, and beyond.”

Critics, though, were furious. A leading anti-corruption campaigner in the United States, Sarah Chayes, told the publication Bellingcat that the CFR’s willingness to accept the donation from Blavatnik’s foundation was a case study in the “soft enabling of kleptocracy.” In particular, she said it fit with Blavatnik’s history of working with “image launderers” to help him fix his reputation. Beyond that, “it broadcasts to the Kremlin that if you just disguise your money a little bit, the U.S. system is still fully penetrable.”

Other critics were outraged, too. “It is more than disappointing to see the Council on Foreign Relations take millions of dollars from a shady billionaire like Leonid Blavatnik, and excuse it by claiming the money will help interns,” former chief counsel Elise Bean with the U.S. Permanent Subcommittee on Investigations was quoted as saying. “The CFR is helping to neutralize Mr. Blavatnik’s notoriety and extend his influence by enabling him to hitch a ride on its once sterling reputation [sic]. It is painful to see how money talks and the odor of corruption is ignored by CFR leadership when it comes to the Blavatnik millions.”

Another critic who signed the letter, former assistant secretary of state for democracy and human rights David Kramer, lambasted the CFR as well. “All organizations should feel an extra burden to perform due diligence, especially in light of the Epstein scandal with MIT,” Kramer told The New York Post. “We object to Blavatnik’s ties to the Putin regime and how he made his money. I’m sure there are CFR members who are happy to receive a $12 million donation, but if they did some further research, they might raise some questions.”

To understand just how influential the CFR is, consider then-Secretary of State Hillary Clinton’s comments when it opened an office in Washington. “I have been often to the mother ship in New York City, but it is good to have an outpost of the Council right here down the street from the State Department,” she said. “We get a lot of advice from the Council, so this will mean I won’t have as far to go to be told what we should be doing and how we should think about the future.”

But far from being a club just for left-wing Democrats, countless leading Republicans are involved too. In a now-infamous video at the CFR’s headquarters, Vice President Dick Cheney bragged that he used to be a director at the organization. “But I never mentioned that when I was campaigning for re-election back home in Wyoming.” The reason why he would seek to conceal his affiliation with the radical think tank is no surprise — thanks to its relentless support for tearing down U.S. independence, it has become politically toxic, especially with conservative voters.

Its anti-American agenda has been known for decades, too. The late U.S. Admiral Chester Ward, a CFR member for almost 20 years before defecting and blowing the whistle, exposed their schemes for all to see. “The main purpose of the Council on Foreign Relations is promoting the disarmament of U.S. sovereignty and national independence, and submergence into an all-powerful one-world government,” warned the widely respected U.S. admiral. “This lust to surrender the sovereignty and independence of the United States is pervasive throughout most of the membership.”

Ward also hinted at the reason why the CFR’s members would be so violently hostile to Trump’s campaign promises. “In the entire CFR lexicon, there is no term of revulsion carrying a meaning so deep as ‘America First,’” he said.

Blavatnik, a billionaire, maintains U.S. and British citizenship, but was born in Soviet Ukraine. Far from being a self-made businessman, the oligarch made his fortune during the post-Soviet “privatization” of resources — in particular, in his case, aluminum and energy. Following the ostensible collapse of communism, which defectors such as Anatoly Golitsyn warned was a ruse to deceive the West, numerous communist bigwigs connected to the mass-murdering regime re-invented themselves as “businessmen.” And they benefited enormously from the corrupt “privatization” programs that basically handed over vast wealth to “former” communist bosses.

In one especially bizarre “deal” orchestrated by Putin, Blavatnik reportedly earned $7 billion from the sale of an oil company to the state-owned Russian energy giant Rosneft. According to investigations cited in the letter, the Russian government mysteriously overpaid by as much as $3 billion. “Such unexplained sums can then be used by Putin-linked private-sector individuals to further Putin’s interests in foreign countries, including by making donations,” the letter said.

Another shady figure whose name recently surfaced in connection with establishment circles in Washington, D.C., is Bulgarian-born operative Alexander Vasilev Mirchev. Among other concerns, critics have seized on Mirchev’s well-documented links to the murderous “former” communist regime in Bulgaria, which slaughtered hundreds of thousands of people. The Bulgarian “consultant” also has close ties to the regime in Kazakhstan as well as to Putin cronies. According to Bulgarian media reports, Mirchev has been on the radar of U.S. law enforcement for some time, and even came to the attention of Special Counsel Robert Mueller.

While it is encouraging to see the growing backlash against Deep State organizations, the outrage needs to go much deeper. For example, amid all the hysteria about alleged “Russian collusion” involving Trump, almost nobody has discussed CFR luminary Henry Kissinger’s close ties to Putin. Indeed, the Russian strongman has publicly referred to Kissinger — a leading proponent of a globalist “New World Order” — as a “trusted adviser” and a “friend.” The two even go to each other’s houses for meals. And yet, the establishment media has said virtually nothing, and Muller is nowhere to be found.

Americans should use this opportunity to demand a proper congressional investigation of the CFR. Late John Birch Society Chairman Larry McDonald, a liberty-minded congressman from Georgia whose plane was shot down by a Soviet fighter jet in 1983, tried to get Congress to investigate the group decades ago. With Putin’s cronies stuffing the CFR’s coffers with suspect cash, a formal investigation into the group — its agenda, its funding, its ties to Russia, and more — is desperately needed. Perhaps Mueller and House Democrats might find some real Russian collusion, after all.