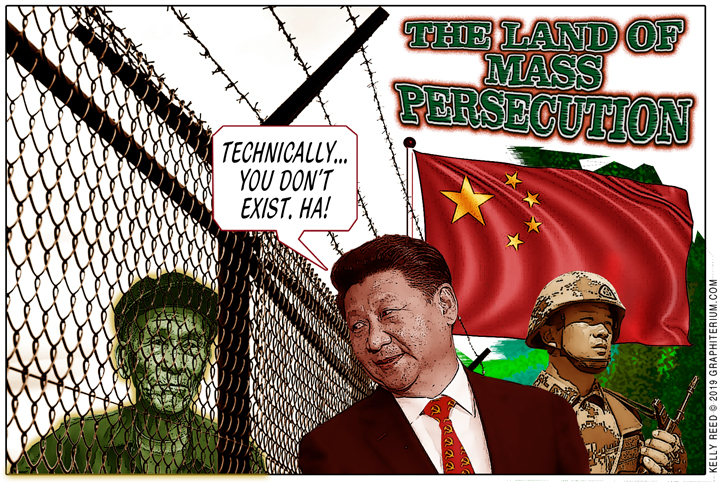 by Alex Newman
The Christian flag is forbidden. But this past week city and state officials in Boston and Philadelphia celebrated the enslavement of China 70 years ago — and the slaughter of an estimated 100-plus million people since then — by holding a flag raising ceremony for the Communist Chinese regime at City Hall. Cities in Canada and Australia also bowed down to the regime. And President Donald Trump even sent “congratulations” to the Chinese dictator on the 70th anniversary of the founding of the People’s Republic of China, drawing sharp criticism from Republicans in Congress.

The events and statements honoring the mass-murdering regime took place even as the dictatorship in Beijing was brutalizing and killing protesters in Hong Kong. Those protesters, who are seeking to preserve their freedom, have been waving U.S. flags and singing the American national anthem as U.S. officials were cheering on their oppressors. Protesters from both China and America, though, were on hand to make their opposition to the groveling known.

Communist Chinese propaganda organs were thrilled by the events. Xinhua, a Communist Party of China-controlled “news” organization that doubles as an intelligence gathering outfit, celebrated the fact that Philadelphia “honored” China by hoisting its flag at city hall. “A flag-raising ceremony was held Tuesday morning at the city hall to observe the 70th anniversary of the PRC founding,” Xinhua reported, boasting that the mayor had announced “a day to observe ‘The People’s Republic of China Flag-raising Day.'”

Mayor James Kenney also provided some nice soundbites for the regime’s propaganda machine. In a proclamation celebrating the murderous regime’s 70th birthday on October 1, the mayor said his city had been “enriched with many key cultural events and business centers.” He also boasted that people of Chinese heritage — all of whom the regime considers either assets or enemies, according to intelligence experts ” were now active in “all aspects of life including in City administration.”

In Boston, a similar ceremony took place on September 29, and has been occurring for a decade now. Among those speaking at the deeply controversial event was Boston City Councilor Edward Flynn, the son of former Mayor Ray Flynn who also served as U.S. Ambassador to the Vatican. The politician, who did not return requests for comment, said he was “proud” to be there with his “friends” at the Communist Chinese Party front group behind the event. Also attending was State Senator Joe Boncore, a Democrat from Winthrop.

But the public was less enthusiastic about celebrating mass murder and genocide. As the flag was being raised, activists used loudspeakers playing music used by protesters in Hong Kong to drown out the regime’s anthem. Chants of “Free Tibet, Free the Uyghur People, Free Hong Kong, and Shame on China,” could be heard louder than the speakers. Among the hundreds of demonstrators in attendance were ethnic Chinese people from Hong Kong and Taiwan, as well as Tibetans, Falun Gong practitioners, and others.

One of the protest leaders, Tibet Action Institute Director Lhadon Tethong, spoke out clearly. “The flag-raising here is a real honor, a privilege to be at Boston City Hall, this place where the American Independence was founded,” he explained. “That [Communist Chinese] flag stands for none of the values that this country was founded on.”

Numerous anti-Communist, pro-freedom Americans attended too. Camp Constitution Executive Director Hal Shurtleff, who helped lead the opposition, noted that he was very impressed with the Hong Kong students in attendance at the protests. “They were well organized, young and brave,” said Shurtleff. “One young man whom I spoke with admitted that he will suffer consequences for protesting the event.”

Shurtleff, who has been protesting the Communist Chinese flag festivities for years and sought unsuccessfully to have the Christian flag raised there too, brought a banner featuring the Christian flag reading “Banned in Boston.” He also brought a banner on persecuted Christians with information about Beijing’s brutality toward the believers in China. “We got the banner right in the faces of the communists,” he said, adding that his video of the event went viral and was seen by over 70,000 people in less than one day.

In previous years, Shurtleff distributed copies of Robert Welch’s book Again May God Forgive Us, which outlines the U.S. government betrayal of China into communist slavery. This year, he was “delighted” to see that protesters outnumbered communist supporters. “While there was at least one brief skirmish with an elderly anti-Communist Chinese man and a supporter of Communist China, and angry verbal exchanges, the protest was peaceful,” he said. “We noticed the arrogance displayed by the organizers. One of them walked by the barricades smiling at the protesters.”

Indeed, mouthpieces for the regime insisted that raising Communist China’s flag was entirely appropriate. “We need to learn from each other and understand each other better to promote a more peaceful world,” claimed Suzanne Lee, the founder and president emeritus of the city’s Chinese Progressive Association that worked with the city to bring the ceremony about. “But I think it”s important to keep that information going, rather than hitting head to head. Nothing can come of it when people don”t talk to each other.”

The Communist Chinese flag raising has been going on for a decade in Boston. In 2009, an official City Council resolution by Councilor Michael Ross and signed by the president of the city council extended its congratulations to the “People’s Republic of China” for the 60th anniversary of its founding. Apparently Boston even forged a “sister-city relationship” with Hangzhou, a city with an international reputation for communist barbarism and ruthless persecution of Christians. The city is also notorious for its organ-harvesting operations centered around the Zhejiang Provincial People’s Hospital.

Perhaps even more controversial than city and state officials celebrating the enslavement of the most populous nation on earth was President Trump’s message to mass murderer Xi, the regime’s supreme overlord. “Congratulations to President Xi and the Chinese people on the 70th Anniversary of the People”s Republic of China!” the president tweeted on October 1, using the term “president” to describe the dictator.

Responding to Trump’s tweet, even some establishment Republican leaders were clearly uncomfortable. Senate Majority Leader Mitch McConnell (R-Ky.), for instance, slammed the regime. “From the modern gulags used to incarcerate Xinjiang’s Uighurs, to the high-tech firewalls and censorship that control the flow of information, to the state’s extensive technical surveillance, to all of the Communist Party’s other tools of social and political control, Xi Jinping’s China looks disturbingly like a modern version of Maoist China,” he said in response to Trump’s comments.

Leaders among House Republicans, meanwhile, said the 70th anniversary was “not a day for celebration.” Rather, House GOP Conference leaders said, “it is an opportunity to remember the victims, past and present, of the Chinese Communist Party (CCP).” Since coming to power, they added, the regime has deprived its victims of fundamental human rights and human dignity. From the tens of millions starved to death, to the students mowed down in Tiananmen Square, to the Uighurs stuck in concentration camps, to the courageous people of Hong Kong, Beijing’s “appalling record of repression is clear,” the leaders said.

“On the anniversary of the PRC, the U.S. stands with the foremost victims of the Chinese Communist Party: Chinese citizens themselves,” said the two Republican leaders. “It is for their future, as well as that of their fellow victims in Xinjiang, in Hong Kong, Taiwan, and beyond, that we rededicate ourselves to ensuring that the Chinese Communist Party is left on the ash heap of history.” The GOP leaders in the House noted that the CCP is waging a campaign of aggression worldwide and that its victims within China are “subject to a nightmarish totalitarian dystopia with the PRC”s ever-expanding surveillance state and social credit system.”

The groveling before the most murderous regime in history was hardly limited to the United States. In Canada, various city governments also celebrated the regime’s enslavement of the vast Chinese nation. However, in Toronto, at least, the mayor very publicly refused to participate, citing “ongoing issues between Canada and China.” Protesters at the event, meanwhile, held signs with pictures of Canadians being detained in horrifying conditions as retaliation for the Canadian government’s role in arresting a leading Huawei executive for U.S. authorities.

In Australia, the Victoria Police disgraced themselves by raising the Communist Chinese flag at the station’s flagpole. Even more horrifying, the officers were forced to sing the murderous regime’s anthem as local and federal officials looked on. But again, there was outrage and criticism.

“Frankly I find it disappointing,” Victoria City Councilor Blair Barker told Australian media after the event, pointing to the brutality being unleashed against protesters in Hong Kong. “We need to be cautious about supporting a foreign regime that does not support our democratic values and principles such as rule of law…. I would have thought our own police force would be a little more judicious when it comes to associating themselves with authoritarian foreign states that have a very different approach to policing its citizens.”

Meanwhile, in Communist China, the dictatorship ordered churches to raise the Communist flag and sing the praises of the Chinese Communist Party for the 70th anniversary. “Many churches in Hangzhou have been required to raise the national flag and sing the national anthem for a long while,” an attendee of a non-government church in Hangzhou dubbed “Mr. Zhou” was quoted as saying in media reports. “Now, China is back to an absurd era, and some regions are even worse than the Cultural Revolution era.” Some churches have also been ordered to replace the Ten Commandments with quotes from dictator Xi Jinping.

Celebrating the founding of the People’s Republic of China is to celebrate over 100 million murders, genocide, torture, barbarism, forced abortions, the harvesting of body organs from dissidents, savage religious persecution, and institutionalized slavery. Raising the flag of Communist China is as disgusting as raising the flag of National Socialist (Nazi) Germany or the Soviet Union. Making the American celebrations even more grotesque, though, is the fact that it was subversives within the U.S. government who betrayed the Chinese people and their leaders so that Chairman Mao could take over. Never again should the flag of Communist China or any other band of mass murderers be raised in the Land of the Free.