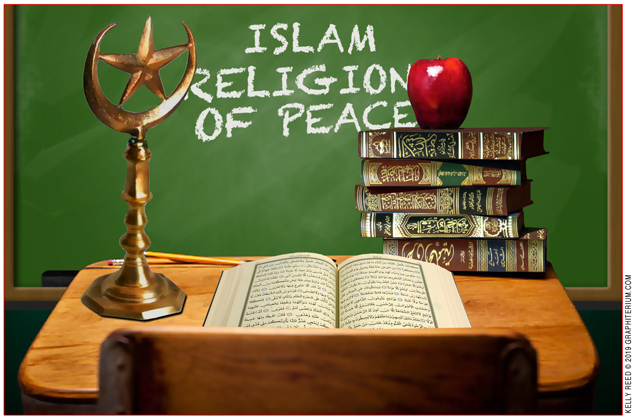 Government schools in Michigan are under fire after an investigation by the Thomas More Law Center, a non-profit legal group, exposed a massive tax-payer funded propaganda program glorifying Islam and denigrating Christianity. Teachers were targeted in the controversial scheme, with the expectation that they would pass the lies on to their students.

The investigation began after TMLC discovered that teachers were being forced to take a two-day “training seminar” on Islam. The program, run by a Muslim “consultant” and self-proclaimed “social justice” advocate, bombarded hundreds of public-school teachers with anti-American and anti-Christian extremism masquerading as “culturally responsive teaching.”

Among other concerns, the training program was “riddled with falsehoods and errors of omission that were clearly meant to deceive,” the Law Center explained. For instance, there was no truthful information provided to teachers on either jihad (holy war) or Sharia (Islamic) law, which are two of the cornerstones of Islam.

Teachers were told that while the Bible had been changed, the Koran had come straight from Allah to Muhammad. “Her message was clear: The Koran is superior to the Bible,” the Thomas More Law Center explained in a statement about its findings, adding that the Muslim “consultant” was paid $2,500 per day to indoctrinate teachers.

The “consultant,” Huda Essa, also dismissed concerns about terrorism, saying it had nothing to do with Islam. Perhaps not surprisingly, the program also taught Michigan teachers that white Christian males were more dangerous to the public than Islamic extremists whose holy book commands them to wage never-ending war against infidels. Essa accused America of “genocide,” too, while ignoring Islam’s 1400 year history of exterminating non-Muslims across the Middle East and North Africa, TMLC said.

“We found that the teachers were subjected to two days of Islamic propaganda, where Islam was glorified, Christianity disparaged, and America bashed,” said Richard Thompson, president and chief counsel of the Law Center, after the investigation was completed. “This type of infiltration amounts to an Islamic Trojan horse within our public-school systems. No other religion gets this kind of special treatment in our schools.”

As part of the investigation, the Law Center filed a Freedom of Information Act request for documents related to the workshop. Within the materials received, the conservative-leaning non-profit legal group obtained audio recordings of the “diversity” presentation forced upon Michigan teachers.

What Thompson found most disappointing about the ordeal was the fact that not a single one of the over 400 teachers subjected to this particular “training” session publicly challenged the bizarre teachings. It was not immediately clear whether this was due to fear of reprisals, agreement with the consultant’s extremism, or other causes.

Similar tax-funded “training” seminars for educators by the same Islamist have taken place in California, Georgia, Texas, Florida, and more. In fact, the consultant’s website openly brags about all the educators across America who have been subjected to the same propaganda, which has been filtering down into school classrooms for years.

It seems that, with one key exception, any and all religions are now being welcomed and promoted to gullible children in government schools in America today — Islam, Hinduism, Buddhism, Humanism, Atheism, and so on, are all celebrated. By contrast, only Christianity and the Bible, the foundations that America and the West were founded upon, is blacklisted, ridiculed, denigrated, and openly attacked.

Especially in a Christian nation like America, this tax-funded anti-Christian indoctrination should be considered totally unacceptable. It represents an existential threat to liberty, peace, and prosperity. Parents and taxpayers need to stop these abuses now, before the ongoing “fundamental transformation” America becomes impossible to reverse. Protecting one’s own children is a great place to start.