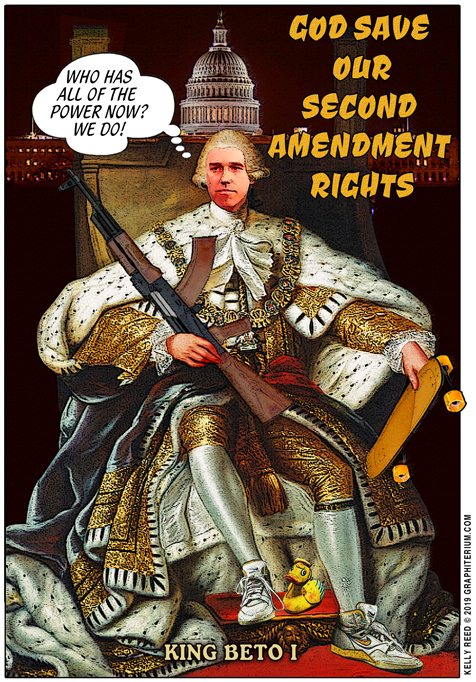 In the early morning hours of April 19, 1775, the British regulars, stationed in Boston, marched up the quiet country road in Middlesex County, Massachusetts. Their goal: to confiscate a cache of firearms that intelligence had informed them the colonists had stored in Concord. Patriot leaders, however, had sounded the alarm by horseback before dawn. Men such as Paul Revere and Samuel Prescott had roused the local militia’s who had been anticipating such an event.

As daylight was breaking the British regulars came out of the woods to a small village along the chosen route—Lexington. Major Pitcairn led the redcoats. Waiting for them were about 80 militiamen standing on the village “commons”—the town square, led by their Captain, John Parker. Determined to defend their God-bestowed right of self-preservation, even from a tyrannical government, the militia refused to disperse when Major Pitcairn ordered it.

Who fired the first shot is a matter left open to historical investigation. The result was that within the next few minutes 8 militiamen were killed during the confrontation. The Redcoats moved on to Concord but were met by several thousand farmers armed with their personal muskets as the news spread through the wooded communities. In the end, the Americans drove the British back to Boston. The Revolution had begun.

The entire event at Lexington was immortalized by Ralph Waldo Emerson in his famous poem, “Paul Revere’s Midnight Ride.”

The struggle actually had begun years before as the British government continually violated its own charters for the colonies that guaranteed them a free-hand governing themselves. One intrusive English law after another specifically violated those written promises. Colonial freedoms were being curtailed. In the end, these written guarantees in the form of charters were trampled by the gigantic growing British government that sprawled itself all over the world.

No one wishes to relive the bloody scenes of the past. Consider, however, the brewing trouble in our own nation and its similarities to 1775.

First, our Constitution was written for one specific purpose—to curtail the federal government. Our Founders felt so strongly about it that they included the 10th Amendment which in sum says that any power or authority NOT specifically delegated to the federal government by this Constitution remains with the people. All rights belong to the people by endowment from God. Government’s sole design is to protect these rights. Since governments throughout history have traditionally removed these rights, our national government was purposefully crafted to be limited.

The framers of the Constitution also realized from hard bloody experience that they must put into writing not only that the federal government needs to be restrained, but that individuals have a right of self-preservation from that government—even if by force. This is how America began. Thus, the 2nd Amendment. The primary reason for this Amendment—the right to keep and bear arms– is to defend rights that are historically lost by intrusive governments—not foreign invaders.

“The people” have a right to firearms. The ability of “the people” to defend themselves against dictators foreign and domestic is a divinely ordained right. As George Mason of Virginia put it, “to disarm the people—that is the best and most effective way to enslave them.”

The 2nd Amendment is, in effect, a “thou shalt not touch this” to the Federal Government. That includes whatever weaponry a citizen may deem necessary to maintain his or her freedom from authoritarian designs.

Second, the current slate of Democratic presidential hopefuls has sounded off about British-style confiscation of certain types of firearms. Beto O’Rourke has campaigned on the promise that the government will confiscate AR-15’s. In the ‘spirit of 1776’, Texas state Rep. Briscoe Cain tweeted “My AR is ready for you Robert Francis.”

These words from Cain have simply enraged the statist-loving mob of the left who believe a person only has what rights a government may give. They see it as simply a threat to murder O’Rourke. But it is a far cry from that. Instead, it is exactly the same circumstances that were seen in 1775. Cain’s remark is no different than a Samuel Adams, or a Paul Revere, answering the arrogant British threat to remove this God-given right. At least we know where left stands when it comes to how we gained our freedom from Britain.

What should alarm the American people is the lawless, tyrannical, and totalitarian attitude from the O’Rourkes and Biden’s of the world that somehow the government can violate its own charters—the Declaration of Independence & Constitution—and impose its godless will on peace-loving American citizens. Beto and Biden sound no different than King George III.

Twitter removed Briscoe Cain’s “My AR is ready for you, Robert” tweet. That violates the rules of Twitter, it is said. Well, now we know what side of the Bill of Rights Twitter is on—King George’s. Making violent threats? No, that came from O’Rourke—“we’re going to take your AR 15” he repeated in the Democratic debate. If the socialist-Democrat party wishes to pursue this course, will we end up having another Lexington and Concord? I hope and pray not. But the lawless Democrats seem to push ahead wildly, regardless of whose rights they trample and the God from whom we own them.