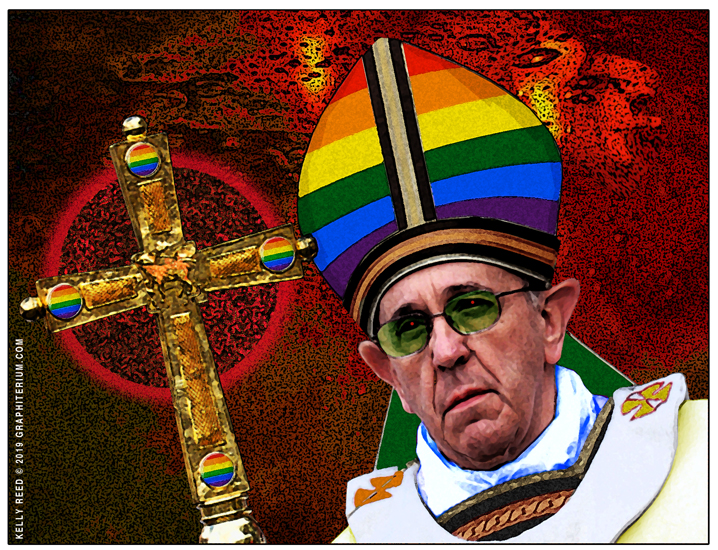 Many voices in the Catholic Church are exulting in the September 1 appointment by Pope Francis of pro-homosexual Archbishop Matteo Zuppi of Bologna, Italy to the position of cardinal. Zuppi was one of 13 individuals promoted. PinkNews, an online news agency for the global LGBT+ community, praised the new appointment precisely because Zuppi is a “pro-LGBT+” advocate.

Another celebrant to the appointment is Fr. James Martin, author of a pro-LGBT+ Catholic book called Building a Bridge. Zuppi had written the “Foreward” to Martin’s book. According to PinkNews, “Zuppi identifies that there is ‘a bridge that needs continuous building’ between the Church and the LGTB+ community, who he describes as ‘people of God.’”

Amazingly, so far from the word of God have many Catholics strayed that Archbishop Zuppi calls the homosexual network in the world “the people of God.” The fact that Zuppi has been named as “cardinal” means he will be able to vote for the next pope when that time arrives (Michael Chapman, CNSnews.com; 9-9-19).

According to PinkNews, the appointment is also “celebrated” among “more progressive Christians, who hope the Pope’s choice of cardinals reflects his vision for ‘a Church of dialogue.’”

So here it is. The Roman Catholic Church is setting a trajectory for pro-homosexual teaching in the future, discarding not only hundreds of years of teaching, but more importantly, the clear biblical teaching which describes homosexuality as not only sin, but “perversion” (Jude 7, NIV). But such is expected to be the case in a church not found on the pages of the New Testament.

The real shocker in all of this is the reaction which many in the “Christian world” have exhibited. Instead of lamenting the direction of society, including those who claim to be “spiritual leaders,” many are celebrating it. If not celebrating—at least defending it.

One person wrote in response to the posted simple news story—“So if you are a Christian or go to church you have to hate gays?”

This is the knee-jerk reaction of people who cannot take biblical teaching regarding sin of any kind. They hurl accusations of “hatred” upon those who point out sin. By this logic Jesus Himself was a “hater” because he taught against “fornication”—which includes homosexuality (Matt. 19:9).

Another responded: “Let him that is without sin, cast the first stone.”

Once again, an anemic effort to thwart the biblical teaching against sin. Since all have sinned (Rom. 3:23) we might as well just put a cork in our mouths when it comes to quoting passages that condemn sin. But more than this, the Bible nowhere teaches that all sin is the same sin.

It is difficult to believe that modern people have come to the conclusion that the sin of burning children alive in the fires to false gods—as did some Israelites in the OT (see 2 Kings 23:10; Jer. 32:35, et. al.)—is no more culpable than a “white lie” spoken to one’s parents. Both are sins—but one not only has many more harmful effects on society as a whole but indicates a deeper depth of depravity than the other.

So it is with homosexuality. Inspired Apostle Paul called the sin of homosexuality “unnatural” (Rom. 1:26) and a “vile passion.” It occurs when God “has given up a society” (1:24). Jude referred to it as “going after strange flesh” (Jude 7, ASV) or “perversion” (NIV). God said plainly in Leviticus that there were a number of particular sins, including bestiality and homosexuality, for which the “land will vomit you out” (Lev. 18:25, 28; 20:22). Not all sins fell into this category. Not all sins are classed as “perverted.”

Still another asks, “Do you love the sinner when you point out sin?” Once more, this sounds as if the biblical doctrine against homosexuality makes us just simply nervous. We immediately dodge by questioning the motives of someone pointing out the sin of homosexuality.

What if I had no love of God in my heart for any sinner? Would that change the truth? Absolutely not. Jonah preached the truth of God to Nineveh (Jonah 3). Nineveh would be overthrown unless they repented. I wonder if the Ninevites squirmed beneath this message by saying—“do you have LOVE for us Ninevites?” –as if to say that somehow the message would be changed if he did not.

But as a matter of fact, Jonah did NOT have love of people in his heart. He was very angry (Jonah 4:1) that Nineveh was spared upon their repentance. He wanted them destroyed!! As all can easily see however, this had nothing to do with the message itself. Jonah delivered the message faithfully even though his motives were not what they ought to be.

It is a perfect illustration of the modern generation being non-thinking, even practicing “avoidance behavior,” on the topic of sin. Whenever sin is pointed out or preached against, we dismiss the teaching by suggesting that “too many people hate.”

Reality is: we are so unaccustomed to God’s Unfiltered Word that we perform many mental gymnastics to avoid its impact—including charging preachers of the Word with being “haters.”

If I do not love one person in the world as I preach it does not change the fact that I am to preach and people need to accept the truth of God. The issue of homosexuality is not whether I love or hate. The issue is: What does the Bible teach, and am I to teach it? If I do not love as I am commanded to do, that is another issue entirely. And what IS occurring today is an overturning of society by the false prophets of the Roman Church by the appointment of pro-homosexual bishops to higher leadership positions.