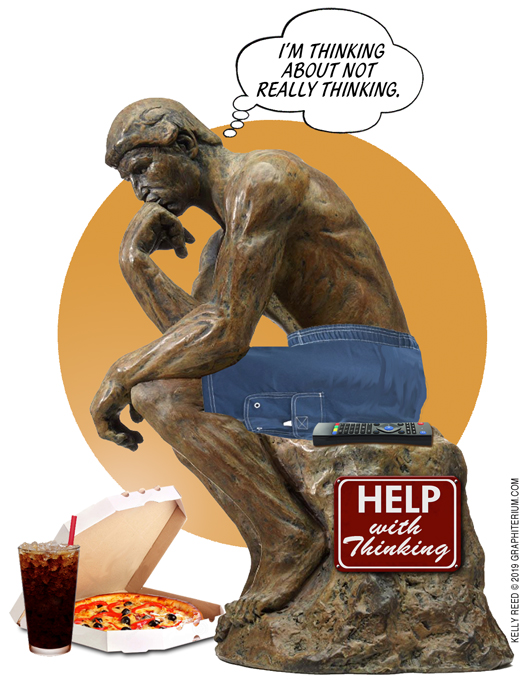 Linda Sapadin, Ph.D, writing for Psychcentral.com, has coined a new term appropriate for too many in our generation. RDD—Responsibility Deficit Disorder. “Our entire culture is plagued with this virus,” she writes. “RDD is prevalent in our society and is a growing problem.”

However, unlike other “clinical” disorders, RDD effects people differently. “Those who have it do not suffer from it. Quite the contrary. The people who ‘suffer’ are those loved ones who must deal with the rat’s nest that is so often dropped in their laps.” How true.

On the lighter side, consider the following real-life excuses people have given to lessen their “responsibility” in motor vehicle accidents. “An invisible car came out of nowhere, struck my car and vanished.” Or try this one: “As I approached an intersection a sign suddenly appeared in a place where no stop sign had ever appeared before. I was unable to stop in time to avoid the accident.” Or this: “In an attempt to kill a fly, I drove into a telephone pole.”

Mothers-in-law will appreciate this one. “I pulled away from the side of the road, glanced at my mother-in-law and headed over the embankment.”

However, in a very real and somber way, Ms. Sapadin is exactly correct about our society and its failure to own-up to responsibility. Not only is it a growing problem, but our political landscape actually encourages RDD. Everything from obesity to “unsocial” behavior to political socialism falls under the umbrella of RDD. Colleges that once taught people how to think now offer “safe spaces” for students who become upset over conservative ideas.

Steve Siebold, writing for The Huffington Post, notes that:

It used to be that hard work was the American way. If you wanted to lose weight, you knew it took a good diet, exercise and a lot of hard work and dedication. If your wanted to make money and achieve the American dream, you worked hard, learned everything you could about your industry and created the life you wanted. Those days are over. Quitting and complacency are the norm. In fact, if our ancestors were alive today—the very men and women who came to this country to fight for the chance at a better life—they would be embarrassed, shocked and devastated at what we’ve turned into.

Social Justice is a concept that carries with it RDD virus. This is because “social justice” has very little to do with actual “justice” but focuses upon “outcomes.” Walter Williams puts it this way,

Outcomes of human relationships are often seen as criteria for the presence or absence of justice or fairness. Outcomes frequently used as barometers of justice and fairness are: race and sex statistics on income and unemployment, income redistribution in general, occupation distribution, wealth ownership, and other measures of socio-economic status.

In other words, no attention is paid to any underlying reason for differences, it is simply assumed that different outcomes among people is the result of crass prejudice and favoritism. For example, wealth distribution is uneven among various races of people. Social justice demands the assumption that foul play must be involved. But this must not be spoken out loud. Our political machinery just moves along as if this were true and prescribes mandates based on race—whether it be in job hiring or incarceration rates.

Differences among people or subcultures as a possible cause is never considered because that would be the “politically incorrect” thing to do.

The American justice system must be “profoundly racist” according to Bart Lubow of Juvenile Detention Alternative Initiative. No examination of personal choices, no time wasted pondering different habits of sub-cultures—simply announce America to be a “racist” culture. This is how Lubow feeds RDD.

In April, 1992 during the Los Angeles riots, Reginald Denny, a white truck driver, was beaten nearly to death by four black men. The attack ended when Damian Monroe Williams took a cinderblock and bashed Denny’s skull, fracturing it in 91 places and causing severe brain damage.

Denny was hospitalized for 33 days with a compound skull fracture, almost 100 broken bones and internal injuries. Doctors said he was only moments from death before being rescued by four good Samaritans. Denny had taken what he thought would be a short-cut off of the Santa Monica Freeway.

At the trial social scientists from UCLA cited “mob behavior” which is “spontaneous.” Damian Williams was found “not guilty” of attempted murder because he had been caught up in “mob mentality.” Williams was “acting out his frustrations, his disappointments.” So argued his defense attorney; so agreed the judge. His only conviction was a 10-year “felony mayhem” sentence—the others were not sentenced at all. Responsibility Deficit Disorder is not only a retreat of the immature—it is encouraged by the judicial system.

The International for Democracy and Electoral Assistance (IDEA), a world organization with the imprimatur of the United Nations, founded in Stockholm, Sweden in 1995, has as its goal Sustainable Democracy.

Specifically, IDEA pushes “gender quotas” in politics and positions of power. “An increasing number of countries are currently introducing various types of gender quotas for public elections: In fact, half of the countries of the world today use some type of electoral quota for their parliament.” The goal is to have more “gender balance” in governmental representation.

What is the excuse for this top-down pressure to conform? Once again, the assumption that women suffer from male prejudice against women in power positions. Out-of-bounds is the question that there are differences between men and women and that many women may not prefer these roles in society. This is another facet of Responsibility Deficit Disorder. We simply disallow that women have control over their own lives and occupations.

The entire Democratic Party is afflicted with Responsibility Deficit Disorder. Nowhere is this more pronounced than in Democratic positions on firearm ownership. Witness the recent debates between 20 presidential candidates in Miami and what they propose as solutions to gun violence in America.

Many of the candidates advocate an outright repeal of The Protection of Lawful Commerce in Arms Act (PLCAA), a federal law that protects firearms manufacturers and dealers from being held liable for criminal misuse of their products (Frank Minter, in Freedom, September, 2019, p. 16). These candidates want gun manufacturers out of business. They UNANIMOUSLY refuse to understand that criminals that use firearms have a personal responsibility in their criminal behavior, and that the rest of us should not be punished.

Joe Biden, for example, said “we should have smart guns. No gun should be able to be sold unless your biometric measure can pull that trigger. It’s without our right to do that, we can do that, our enemy is the gun manufacturers, …” Smart guns, but not smart politicians. The gun manufacturers? RDD.

Biden even stated he would be willing for the federal government to confiscate millions of popular semi-automatic rifles from the public. Biden is not constitutionally-minded either.

Not to be outdone, former U.S. Rep. Beto O’Rourke opined that semi-automatic rifles are “weapons of war” and do not belong on our streets. Sen. Kamala Harris has threatened an unconstitutional executive order if Congress did not pass a new gun-legislation within her first 100 days in office. Sen. Bernie Sanders runs on a platform of “banning assault rifles” as well as “ending the gun show loophole.”

Not one of these candidates cares about the Bill of Rights, the Constitution, or the God-given rights owned by each citizen of America. They all function with RDD and suppose that you will as well. They will never even address the real issue as to rising crime and gun violence—lack of moral responsibility and moral character in America. That would be getting too close to “religious values” which they disdain.

If we are going to solve the growing Responsibility Deficit Disorder in our nation, begin by taking responsibility for your own actions. Desert any institution that refuses to recognize personal responsibility. Translated, that means, leave the Democratic Party. Because, as Dr. Linda Sapadin advises, “Dream on that the other person will change. He’s got it good—especially if you’re are enabling his dysfunction.” Quit enabling Democratic dysfunction.