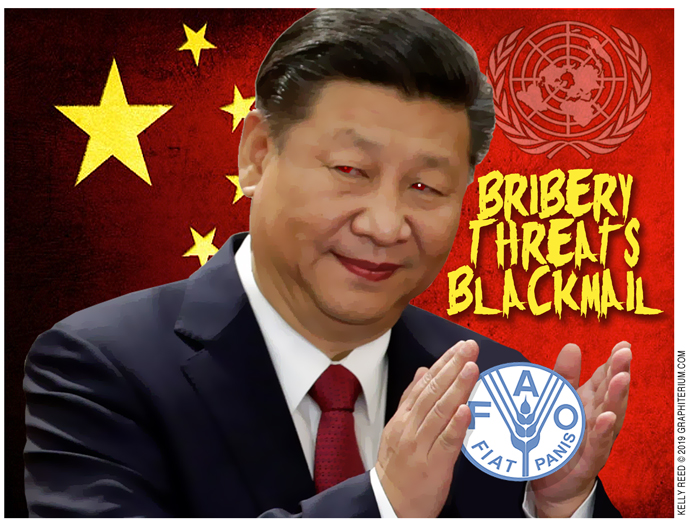 Using bribery and threats, the Communist Chinese regime in Beijing just secured control over the United Nations Food and Agriculture Organization (UN FAO), a key UN agency with a massive budget. Several Western governments tried unsuccessfully to stop the takeover by Communist Chinese operative Qu Dongyu (shown). Especially alarming to observers is the fact that the regime openly boasts that its nationals at international agencies must continue obeying orders from the Communist Party of China. Indeed, the Communist Chinese then-president of Interpol was arrested during a visit to China, with officials saying he was obligated to obey party orders.

But the latest victory for the most murderous dictatorship in human history represents only the most recent international organization to fall into China’s hands. Indeed, a fast-growing number of UN organs are already under Chinese control including the agency being groomed to control the Internet, the agency overseeing air travel, and other powerful UN bureaucracies. And if Beijing and its powerful Western allies get their way, this will not be the last UN outfit to come under Beijing’s control. The implications for freedom in light of Beijing’s growing role in what globalists describe as the “New World Order” are enormous.

The UN FAO selection process was hardly legitimate, sources in Rome and Washington told The New American and other publications. Indeed, a diplomatic source quoted by the French newspaper Le Monde said that Beijing had given African candidate Médi Moungui a multi-million dollar bribe in exchange for withdrawing from the race. Multiple UN FAO ambassadors sustained “intense Chinese pressure.” Various media outlets around the world even reported that Beijing had threatened at least several national governments, including those in Brazil and Uruguay, with a ban on agricultural exports to China if they failed to support Qu. Communist regimes such as the mass-murdering dictatorship enslaving Cuba openly backed Qu.

While the election is based on a secret ballot, it is known that Qu secured 108 votes in the first round of voting. The next closest candidate was Catherine Geslain-Lanéelle, a euro-socialist from France with the full backing of the European Union superstate who secured 71 votes. Coming in third place was Davit Kirvalidze from the nation of Georgia, who, despite backing by the Trump administration and some of its allies, barely got a dozen votes. The decision was made by the UN FAO’s 194 member governments and dictatorships, all of which get one vote. The agency has more than 11,000 employees and is one of the largest in the UN system.

Qu and his masters in the Communist Party of China could barely contain their glee. “I’m very grateful to my motherland,” the communist operative declared after winning the secretive selection process. “Without 40 years of successful reforms and open-door policy I would not have been where I am,” he said in his first speech, proudly sporting a lapel pin promoting the totalitarian UN Agenda 2030 that Beijing said it played a “crucial role” in developing. “Now the election is over and I will be committed to the original aspiration, mandate and mission of the organization.”

Among the various policies Qu has touted was a massive surge in what he called “Vitamin M,” or “money.” In a speech, he called for boosting the organization’s funding — already at almost $3 billion per year — by 10 percent annually for every year of his term. And in April, while campaigning for the post, Qu called for “changes” in the “production and consumption” of agricultural goods around the world under the guise of environmentalism. This comes directly out of the Agenda 2030 scheme, described by UN leaders as the “master plan for humanity” and a “global declaration of interdependence.”

Back in Beijing, Qu’s overlords were overjoyed, too. Qu’s victory was a “show of high appreciation of China’s support for multilateralism and advancing global development,” according to Communist Chinese “foreign ministry” spokesman Geng Shuang. Geng vowed that the dictatorship, which starved millions of people to death in the not-too-distant past, would “continue to work with other countries to promote the development of the global food and agriculture industries.” That should be highly troubling to advocates of freedom and private land ownership.

The new director-general, who served as “vice minister for agriculture and rural affairs,” will replace Brazilian communist Jose Graziano, whose term has been marked by seemingly never-ending scandal. Among other outrages, Graziano has worked to shut down honest reporting and criticism of his tenure. In one especially outrageous case, the Brazilian radical even sought to destroy the Italian Insider newspaper while having its editor jailed under arcane local laws. Graziano was outraged that the Rome-based publication was exposing various scandals and misdeeds among FAO leadership, and so, in totalitarian fashion, sought to crush his perceived enemies using the power of government.

Graziano is also a longtime ally of disgraced former Brazilian President Luis Inacio “Lula” da Silva, a Marxist revolutionary sitting in jail for corruption. The outgoing FAO boss has also used corruption and nepotism to try to advance the communist takeover of Latin America while trying to protect communist criminals from prosecution by granting them diplomatic immunity. Under Graziano, FAO even awarded honors to the imploding socialist dictatorship in Venezuela for its efforts to “fight hunger” — even as much of the population literally survived by eating garbage, pets, and zoo animals. Unsurprisingly, Graziano was fully behind Qu.

As The New American has been documenting for many years, the Communist Chinese dictatorship, with the full support of subversive Western globalists, has been busy accumulating more and more influence within the emerging “global governance” system. Indeed, there are more Chinese nationals in charge of UN bureaucracies than any other nation or government. Until recently, even the self-styled global “police” agency Interpol was under Communist Chinese control.

Other UN agencies under China’s control include the UN International Civil Aviation Organization (ICAO), which is pushing global taxes on air travel. Also run by a Communist Chinese agent is the UN Industrial Development Organization, a disgraced entity helping to build up hostile Third World regimes such as the murderous dictatorships in North Korea and Cuba with Western money and technology. Another key UN entity run by a Communist Chinese agent is the UN International Telecommunications Union (ITU), which is seeking global censorship and controls of the Internet. Also under Communist Chinese control is the powerful UN Department of Economic and Social Affairs (UN DESA). Beijing has agents serving as deputy leaders of multiple UN organizations as well.

Communist Chinese agents are also embedded all throughout the IMF, the World Bank, and beyond. Numerous UN agreements and conferences have featured Chinese Communists as leading players, including the UN Conference on Sustainable Development in Rio de Janeiro, which was chaired by a Chi-Com agent. The Party-controlled autocracy even opened a “School of Global Governance” at the Beijing Foreign Studies University to train legions of Communist Chinese agents to penetrate the institutions of the so-called New World Order, as Western and Chinese globalists refer to the emerging global regime.

Taiwan Ministry of Foreign Affairs Spokeswoman Joanne Ou warned that Beijing was “systematically deploying its officers to occupy high-ranking management positions in many important organizations, purporting to alter their policies and operations to serve its own national interests,” local media reported. Behind the scenes and increasingly out in the open, senior officials from Western governments are starting to wake up to the increasing threat of Communist Chinese influence operations.

Qu’s widely touted role as Beijing’s “vice minister for agriculture” should itself have been a giant red flag for governments around the world. Among the atrocities being perpetrated against the Chinese people under the guise of “agricultural reform,” for instance, is the wholesale uprooting of families and communities from their land. These rural people are currently being herded — often at gunpoint — into emerging new mega-cities being constructed by Beijing in accordance with UN “sustainability” schemes such as Agenda 21, Agenda 2030, and more.

Qu has also worked on the dictatorship’s so-called Belt and Road scheme, whereby Beijing intends to expand its totalitarian tentacles across Eurasia. Numerous UN agencies — especially those under Beijing’s control — are hard at work helping China to promote and advance the Belt and Road project. And they do not even bother to hide it anymore.

Qu will take up his post on August 1, with his first term ending in 2023. His salary alone will be more than double President Donald Trump’s pay. With the UN’s agricultural department firmly under Beijing’s grasp, the regime is now working to install Andy Tsang Wai-hung as head of the UN Office on Drugs and Crime. The U.S. taxpayer funds about one third of the FAO’s bloated budget. And there is already talk in the White House about defunding or withdrawing from the FAO. But that is not enough. It is time for the United States and other civilized and free nations to abandon the corrupt UN and its Communist Chinese-controlled tentacles before the threat grows even more severe.