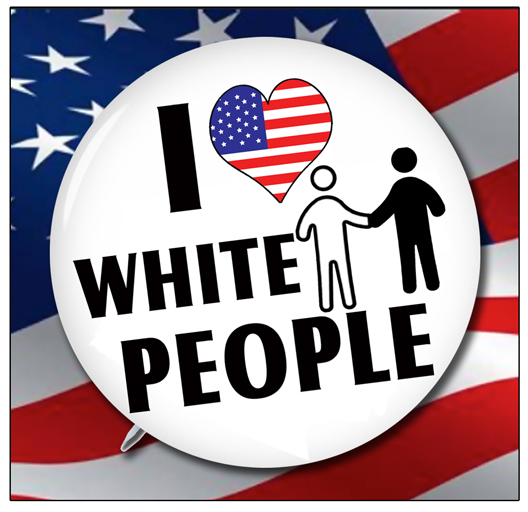 Somehow in this country, white people became the only ones called “racist” (even though “racism” does not exist; it’s either right or wrong, good or evil). Everyone is encouraged to hate white people. The Civil Rights Movement, which I regret participating in, only brought destruction. Blacks forced white private businesses to service them, and whites began catering to blacks. Then other immoral people came in and used black people for their own agenda, to bully the weak whites. Women who hate men, radical homosexuals, illegal aliens and others seduced black false leaders, comparing their wicked causes to blacks’ supposed “struggle.”

I often ask black and Hispanic liberal guests on my talk shows, “Do you love white people?” Rarely can they simply answer, “Yes.” But when I ask them if they love blacks or Mexicans, it’s suddenly an easy answer – “Yes!”

This month of July is my second annual celebration of White History Month. America is great thanks to white people. But it’s so overrun with blind white-hating people that we now have a Muslim woman with a head rag in Congress! Rep. Ilhan Omar, D.-Minn., is an evil, America-hating, Christian-hating “social justice warrior.” But she falsely claims, “I probably love this country more than anyone that is naturally born.” Her kind of “love” is the same emotional, egotistical spirit as angry single black mothers who raise thugs and defend them when they commit crimes.

I’ve been saying for years that if anyone does not love this country, they can leave! If you hate white people, and you believe in so-called “racism,” even though whites let you into this country, go back to Africa or wherever you came from! Same with the white communist antifa members who hate American freedom – get out of my country!

President Trump rightly said the same thing in a few tweets last Sunday. He suggested that these “progressive” Democrat Congresswomen “go back and help fix the totally broken and crime infested places from which they came.” He’s right. But they won’t, because they’re hypocrites – including Alexandria Ocasio-Cortez, Ilhan Omar, Rashida Tlaib and Ayanna Pressley. Not only will they not fix their own communities, they want to mess up ours! They only offer abortion, immoral socialism, false victimhood and hatred of white people, men and Christians.

Although the president defended white female Democrat Nancy Pelosi against false accusations of “racism” by Cortez, Pelosi turned on Trump, paying back evil for good. In order to help “women of color” who hate her, Pelosi led a controversial vote condemning what she falsely called “racist tweets,” denigrating the president. In response, Trump pointed out that “this was the first time since 1984 that the Speaker of the House was ruled Out of Order and broke the Rules of the House.”

Thank God, a beautiful crowd in Greenville, North Carolina echoed the president’s sentiments, chanting, “Send her back!” – referring to America-hating, Israel-hating Ilhan Omar. The children of the lie, including the liberal media, Democrats, RINO Republicans and Never Trumpers, of course freaked out over the lack of political correctness. These deceivers hate good people, and support America’s enemies. Weak, cowardly establishment Republicans begged the president to distance himself from the “send her back” chant, which he obliged to a point. But when pressed by media, the president stood by the people of North Carolina as “incredible patriots.”

President Trump loves America, and said that these Democrat women “can’t get away with” denigrating its people. “I’m unhappy that a Congresswoman … can call our country and our people ‘garbage.’” He referred to Cortez (the socialist), who trashed the opportunities offered by this country, and called the late President Reagan and working white people “racist.”

Trump said, “I can tell you this, you can’t talk that way about our country, not when I’m the president.” These are the words of a real man. Not a weak, pathetic person concerned with silly notions of “racism,” “sexism” and whatever else they come up with – Trump stands on what’s right. He’s a straight, white, conservative Christian man of power – everything the children of the lie hate.

Ilhan Omar promised to be the president’s “nightmare,” which really means she wants to be America’s nightmare. Trump said, “She’s lucky to be where she is. … And the things that she has said are a disgrace to our country.”

I say shame on us for allowing such a woman to come here. But this is what evil wants. It’s time for the people on the side of good to stand up. Thankfully, President Trump is doing that.

There’s nothing more important than rebuilding men. There are no men in the Democrat Party – only weak beta males. Women run the Democrat Party, which is anti-American and of Satan. We saw what happened when men disappeared from black homes. The black community worships “mama” while they kill one another. Now other races, including whites, follow in blacks’ footsteps of self-destruction, by following women. Whites have turned to weakness and surrender, thinking the people of color will love them. That’s not the way.

Watch and learn from this president, who makes evil unwelcome again.