Jesse Lee Peterson: NOBODY LOVES AMERICA LIKE WHITE PEOPLE DO 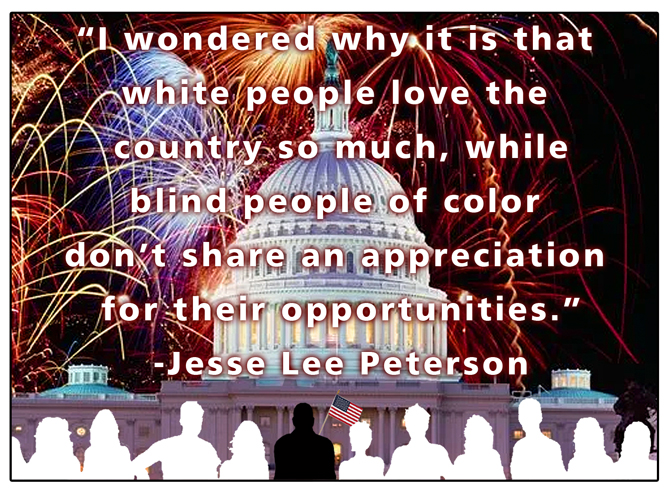 Jesse Lee Peterson applauds those who support our country

One man, President Donald Trump, is restoring America to its original greatness. God bless America, and God bless the Great White Hope, President Trump! With this year’s Salute to America on Independence Day in the nation’s capital, it’s finally clear that America is back!

I am 70 years old. I have not seen such an inspiring patriotic celebration since I was a kid. The president’s speech, and the event that he put together for the Fourth of July, expressed his pure love for our country.

I have noticed that no other group of people in the United States truly loves America as a whole like white people do. While growing up on the plantation, and throughout my life, I’ve watched white people proudly honor the country with visible displays of affection and respect. They support freedom, independence, true justice (not fake “social justice”), and adherence to our laws and Constitution like no one else. They work hard, create businesses, jobs and inventions, and – right or wrong – share these opportunities with others, and selflessly support others’ rights. President Trump is a perfect example of this love.

I wondered why it is that white people love the country so much, while blind people of color don’t share an appreciation for their opportunities. I realized that it’s because white men founded and built America, the greatest country on earth. Everybody and their mama want to come here – we can’t even keep the illegals out! But once they’re here, whether by choice or by force, they turn on the country and the white people who allowed them to be here. Nowadays, only whites have it in them to love and preserve America.

When I worked picking cotton as a boy with my grandparents, when blacks were moral and hard-working, we loved the country too. It only makes sense to love the place where you were born – especially the United States of America. But as blacks fell for the lies of socialism and communism, they also fell away from love. Blacks abandoned morals, fathers and real belief in God. Now they cling to false victimhood, government taking care of them, and insane hatred toward white people.

You can find some people of color who like the country. A few even really love the country, those who’ve awakened out of their fallen state. Thanks to the president, his courage and realness, many people of all races are awakening and finding that love.

I’ve been working for over 29 years, telling the truth, encouraging blacks to wake up, drop anger, and return to their fathers and to God. People of all races have tuned into my radio show, church services, and my interviews with people on “the Fallen State.” Many of them call in to talk on-air about the issues they’re going through, or get private counseling through my nonprofit, BOND. They commit to prayer, get to know themselves, forgive their parents – and their lives return to order.

Last year, I declared July to be White History Month. Doesn’t July just feel white? It’s because of white people that we have Independence Day in America. In this country, we have the ridiculous “Black History Month” for so-called “African Americans” who don’t feel like they’re part of America. Homosexuals get two separate months! One celebrates so-called “Pride” and the other “LGBT history,” as if there’s anything good about homosexuality, transgenderism or any of that crap. Why not White History Month? Decent whites are hated – for no reason – by the people of color and children of the lie.

Disgracefully, we’ve allowed communism to take hold in America – an evil, anti-American, hate-based ideology that demonizes good white men like Trump. Some filthy communist scumbags burned an American flag in front of the White House, clashing with the Proud Boys and other normal patriotic people celebrating. But one man wearing a “Make America Great Again” T-shirt grabbed the tattered flag from America’s enemies as it burned. A U.S. Marine Corps veteran, he refused to step on the flag, but put out the fire with his bare hands. It’s beautiful that a veteran would show this love.

Unfortunately, the children of the lie have propped up a mixed-race black thug to falsely demonize our country, our flag, our military and police. You’ll recall Colin Kaepernick was the former NFL football player who refused to stand for our National Anthem, turning his back on America. Knowing that most blacks support evil, the shoe company Nike sponsored him with an advertisement promoting him as a hero.

On the first of July, Nike bowed again to the thug Colin Kaepernick, canceling the release of their patriotic shoes. Retail stores reportedly already received Nike shoes emblazoned with a “Betsy Ross Flag,” styled after the American flag from the time of the American Revolution. But because Kaepernick complained that America’s founding represents white people and “slavery,” Nike cancelled the release of the shoes!

This is why I want white people to marry and make white babies. I call on all people of good will to appreciate white people. If we lose whites as a majority, we lose America.