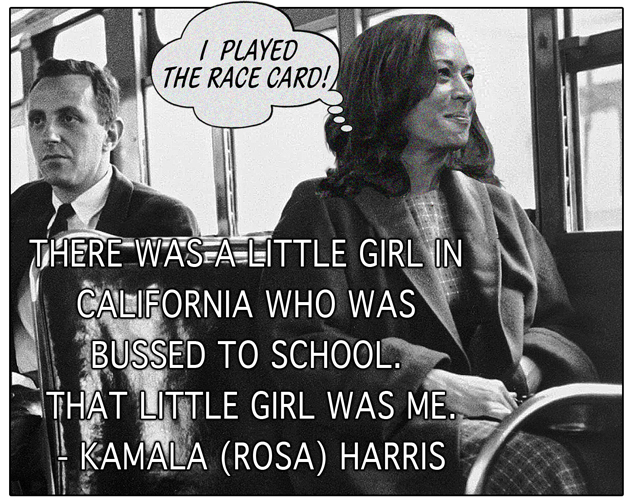 Sen. Kamala Harris, D-Calif., was touted as the winner of the second Democratic debate, in part, because she went after Joe Biden accusing him of opposing bussing to integrate public schools and of coddling segregationists. Biden said Harris misrepresented his record.

Biden has been criticized by some for recent comments he made about his ability to get along with Democratic Sens. James O. Eastland of Mississippi and Herman Talmadge of Georgia, both known segregationists. Biden later spoke at Jesse Jackson’s Rainbow PUSH Coalition in Chicago and defended his record on civil-rights, mostly by talking up former president Barack Obama. He cited that the Obama Department of Justice investigated discrimination by police in places like Ferguson, Missouri.

The Obama-Biden record on civil-rights is awful! For eight years, Joe Biden was part of the most anti-white, anti-police administration in U.S. history. Obama-Biden intentionally divided this country along racial lines with false claims of “racism” and “police brutality” in order to keep blacks on the Democratic plantation. They undermined trust in the judicial system. They politicized and tied the hands of law enforcement while allowing dangerous street thugs to attack cops with impunity.

Kamala Harris played the race card and scored political points. Harris’s campaign reportedly raised $2 million in the 24 hours after the debate. But like Obama and Biden, Harris is a far-left Democrat who promotes racial division and class warfare.

Harris was born in Oakland, California in 1964 to a Jamaican father and Indian mother. Her parents divorced when she was seven and Harris’ mother moved with the children to Montreal, Québec, Canada, where Harris remained until she finished high school. Like Obama, Kamala has no connection to black America’s struggle for civil rights. Just because Harris was bussed to a white school in Berkeley for the sake of integration, it doesn’t make her the modern-day Rosa Parks or a Freedom Rider! Harris is playing the race card to get black votes.

As reported by the Washington Examiner, Harris’s first major political role was an appointment by her powerful then-boyfriend and Democratic speaker of the California State Assembly, Willie Brown (three decades her senior) to a cushy California medical board that paid $70,000 per year! Today, she’s married a successful Jewish attorney.

Kamala Harris will say anything to get votes. A recent example of Harris’s pandering is her support for the legalization of marijuana, which she opposed as California’s attorney general. When questioned about her flip-flop, Harris cited her Jamaican heritage: “Half my family is from Jamaica, are you kidding me?” She said she supports legalization because smoking pot “gives a lot of people joy, and we need more joy.”

Her father, Donald Harris, took issue with his daughter’s use of the drug stereotype as she runs for president.

“My dear departed grandmothers, as well as my deceased parents, must be turning in their grave right now to see their family’s name, reputation and proud Jamaican identity being connected, in any way, jokingly or not with the fraudulent stereotype of a pot-smoking joy seeker and in the pursuit of identity politics,” he said in a statement to Jamaica Global.

Harris’s father has also reportedly written about their family ancestry and said that one of his grandmothers was related to a plantation and slave owner while the other had unknown ancestry.

Kamala Harris and Democrats are more committed to taking care of illegals than they are Americans. They are not campaigning to appeal to all of America; instead, they’re trying to pander to illegal aliens, radical LGBT groups and the pro-abortion crowd.

Democrats want to give illegals everything, but they refuse to help American citizens. They promised healthcare for all (including illegal aliens) without offering a way to pay for it. When asked if they’re going to do anything to close the southern border, not a single person raised their hand; but they want to add another 30 million illegals to rely on the government. There are Americans who can’t afford to pay for healthcare as a result of Obamacare. We need to look out for the American people first!

Democrat California lawmakers are working on a proposal to let young illegal immigrants enroll in the state’s Medicaid program (Medi-Cal). Eligible people up to the age of 26 would be covered, regardless of their immigration status. The plan could cost the state as much as $98 million per year! New York State passed a bill that allows illegal aliens to get driver’s licenses. Democrats want to give illegals the right to vote, and issuing licenses is one way to do it.

Kamala Harris is for socialism. She wants free college for all, including illegal aliens! Harris wants to raise taxes on the middle class. She is staunchly pro-abortion. She is anti-Second Amendment and supported a bill ending cash bail for criminals.

Kamala Harris and the Democrats don’t care about black people. Blacks have fared much better under President Trump than any other president in recent history. Democrats haven’t done anything to help improve the inner cities – they’ve made things worse. If Kamala Harris and Democrats have their way, they will bankrupt the country with handouts to illegals and push blacks to the back of the bus.