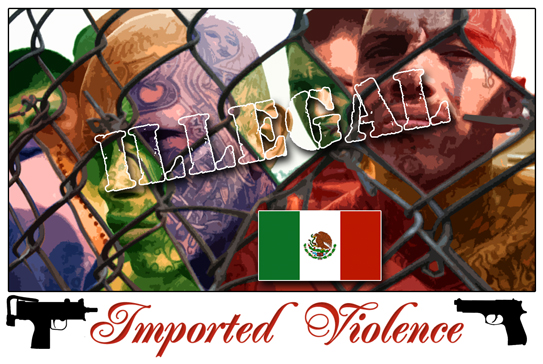 Almost five years ago, I wrote about how then-president Barack Hussein Obama was a “deadbeat dad” to American children In his mission to fundamentally destroy America, not only did the Fallen Messiah attack Christians, whites and police, but he also abandoned America’s black children. Along with the deceptive liberal media, he pretended to care about illegal alien “children” by bringing them by the thousands into our country for votes. For decades, RINO Republicans and godless Democrats have catered to illegals, exploiting them for power, politics and cheap labor – to the detriment of American society.

For over 29 years, I’ve spoken out against illegal immigration on behalf of blacks who bear the brunt of the chaos brought by open borders. Illegal aliens and their children often end up in black communities, take black jobs, crowd their hospitals and schools, and fight with black children.

In 2007, I wrote about the rise in “brown-on-black” violent crime, ignored by false black “leaders.”Newark’s then-mayor Cory Booker, a black Democrat now running for president, defended “sanctuary city” policies. Booker was unconcerned about “immigration status” after six Hispanics allegedly executed three black teens in his city. The illegal alien ringleader behind the murders, Jose Carranza, was out on bail from charges of repeatedly raping a 5-year old girl. (Donald Trump was right when he talked about drugs, crime and rapists coming up to America through Mexico, in his 2015 presidential campaign announcement.)

Police, federal authorities, and even the far-left Southern Poverty Law Center sounded the alarm on anti-black ethnic cleansing by Hispanic criminals. The Mexican Mafia ordered Latino gangs to target, intimidate, terrorize and even kill black citizens at random. Violent attacks have been documented across L.A. County since the early 1990s. Latino street gang members admitted to a racially motivated firebombing attack on black families at a Boyle Heights housing project on Mother’s Day in 2014. Just last year, the Hispanic suspects agreed to plead guilty to so-called “hate crimes” as part of a plea deal.

Blacks have been replaced in their own neighborhoods, in the workforce and even as the favored “victim” group of the wicked Democrat Party. Now blacks have been overtaken by Hispanics as the dominant “minority.” Liberal and RINO intellectuals whom I interview on my talk shows outright deny this reality, that blacks are affected first and foremost by illegal immigration. They don’t care about black people. And they cannot admit what’s plain as day by a mere glance at once-black communities such as Compton, California. Blacks are fleeing the cities back to the South to escape the madness.

On July 4, 1996, members of my nonprofit organization, BOND, and I participated in a Prop 187 rally outside the federal building in Los Angeles. (California Republican Governor Pete Wilson signed a voter-passed 1994 Proposition 187 to ban healthcare, education and welfare services for illegal aliens. Disgracefully, a liberal female judge later struck it down as “unconstitutional.” Liars pretend this law was why weak RINO Republicans lost California to the Democrats.)

At the protest, angry pro-illegal alien activists threw objects at us. A white male friend of mine was struck in the head by a frozen coke can. A Hispanic female Univision reporter asked him if he was “racist” as he stood bleeding from the head He and I confronted the “journalist” for asking such a dumb question – she tried to ignore me because I was black and on his side. Whites are so hated that they’re blamed even as victims of Hispanic crime. The mission of liberals is to defame and degrade white men, the last demographic standing in their way.

Twenty years later, nothing’s changed: In 2016, we saw this same violence in California cities Costa Mesa and San Jose where Hispanic thugs assaulted and bloodied white people at Trump rallies. Whites are scapegoated, smeared and victim-blamed while criminals “of color” get special treatment from the media and government.

Liberals, whoring for votes, call white conservatives “racist” because most whites have the good sense to oppose illegal immigration. The slanderous accusation of “racism” (which doesn’t even exist) intimidates many whites into submission while they surrender their country to the children of the lie. This silence means many “minorities” grow up in an echo chamber of liberal lies, in schools, mainstream and social media, and even their liberal churches. They never hear the truth. The lie sounds familiar and comfortable to them, while truth sounds foreign.

Illegals have no right to be here. It’s immoral that they sneak in and stay here illegally, bringing their socialist mindset from “s–hole countries.” The media and government gaslight Americans by lying about the problem, calling illegal aliens “asylum seekers,” “undocumented immigrants” and “economic refugees,” feeding illegals’ entitlement mentality.

Only President Trump, whom I call the Great White Hope, cared enough about black people – and all Americans – to declare a national emergency. Trump has fought to build the wall, enforce “zero tolerance” for illegal border crossers, and called for ending “birthright citizenship” for “anchor babies.” Now he’s calling for mass deportations, which I fully support: Send them back!