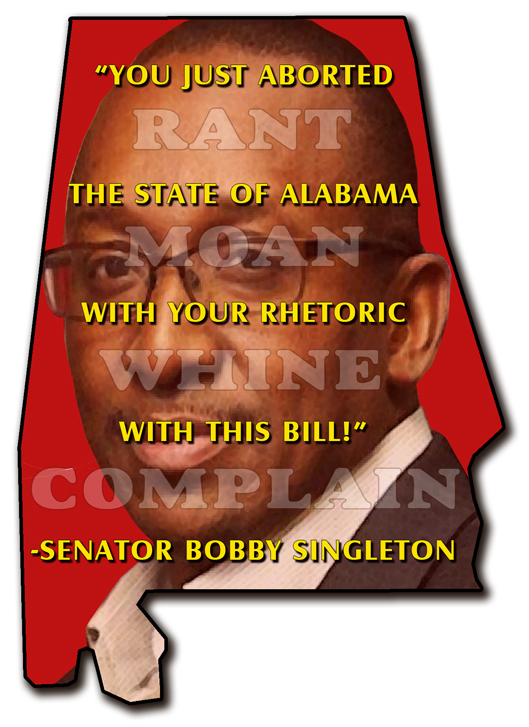 Alabama governor Kay Ivey just signed into law the toughest anti-abortion bill in America. The new law, which such groups as the ACLU plan to challenge in court, makes it a felony for a doctor to perform an abortion at any stage of pregnancy—punishable by up to 99 years in jail.

Predictably, liberal groups are bewailing the measure. Staci Fox of Planned Parenthood Southeast said: “Today is a dark day for women in Alabama and across the country.” But it the meltdown prize goes, hands-down, to Alabama Democratic Senator Bobby Singleton. On the floor of the Senate he ranted,

“You don’t care about babies for real you just kicked them in the stomach, and you aborted them yourself! You just aborted the state of Alabama with your rhetoric with this bill!”

It is difficult to know where to begin with such an ungrammatical non-reasoning rant. What does “aborting the state of Alabama” mean? And why should it be punishable by death when Sen. Singleton thinks that murdering unborn children ought to be allowed? How is the state more valuable than its citizens?

Apparently, not everyone in the Bible belt is familiar with the prominent text from Psalms 139:13-14, “You [God] formed by inward parts; you knitted me together in my mother’s womb. I praise you, for I am fearfully and wonderfully made.”

How this will play out in the courts, who knows?

Jesse Lee Peterson, host of the Jesse Lee Peterson Show (Rebuildingtheman.com), commented only three words when asked about his home state of Alabama and its tough stance: “Sweet Home Alabama!”

Now comes Alexandria Ocasio-Cortez on Twitter showing her true Democrat colors and blatantly lying about the law. She bemoaned the law this way: “Alabama lawmakers are making all abortions a felony punishable with jail-time, including women victimized by rape+incest.”

Of course, that is a bold lie. The law does not jail women who abort their babies, but the abortion providers. When called in the carpet for her lie, like a little child she lied again. Liz Wheeler of One America News Network put it clearly. “Under no circumstances would women be jailed for abortions. The abortionist would be penalized.”

To that public corrective, AOC responded to Wheeler with this: “Actually, it would be a felony for women—if those women are medical providers. See?” (Warner Todd Huston, godfatherpolitics.com).

Then follows another foolish statement repeated by AOC that too frequently goes unanswered. “This law forces people to be pregnant against their own consent.”

This reminds me of a pro-abortionist woman who told me upon one occasion, “If you [by government law] force me to keep the child, then you will have to help me raise it.” In other words, some of these women demand public hand-outs or welfare, financed by me, if they cannot abort (kill) their children.

No. There is the option that no one wants to discuss. Quit having sex outside of a legitimate marriage. Sexual activity has consequences—and it seeks to overturn the law of God to thrust the consequences of your sinful actions upon me.

But what about women who are victims of rape who are being “forced” to carry pregnancy to term? AOC gets all worked up about this. The answer is, if American went back to the standard of God which properly punished such crimes as sexual assault, then the issue would all but evaporate.

Deuteronomy 22:23-24 prescribes the death penalty for both the man and the woman in consensual encounters. In the next verses, 25-27, a sexual assault, not consensual encounter, is described. In this case, “then only the man who lies with her shall die. But you shall do nothing to the girl; there is no sin in the girl worthy of death, for just as a man rises against his neighbor and murders him, so is this case.”

Bringing back the death sentence, and execution in a timely fashion, shows that we are serious about these types of crimes. Instead, our soft penal system does not deter from crime, and sexual assault becomes rampant.

In the end, the question is: Is it life in the womb or not? The Bible and science agree that it is—from the moment of conception. Since that is the case—it is nothing less than murder to take willingly the life of the unborn. It is refreshing that lawmakers in the great state of Alabama understand this and will legislate accordingly.